HomeResourcesSoftware DevelopmentWhat’s the Difference Between Node.js and AngularJS and Why Should You Learn Them?

What’s the Difference Between Node.js and AngularJS and Why Should You Learn Them? 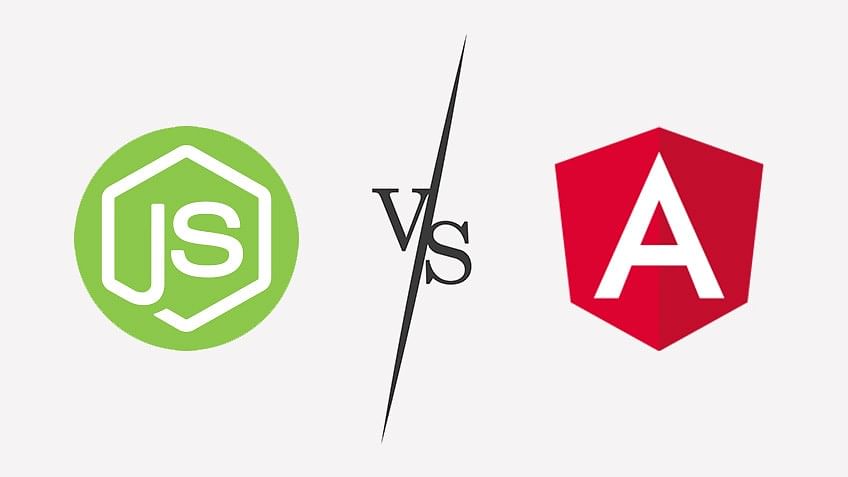 Since the internet and mobile usage keeps rising, there is a corresponding increase in the demand for more applications. This higher demand has, in turn, spawned a host of tools and resources dedicated to web application development.

And while it’s always great to have choices, the sheer volume is daunting. Which one of the many frameworks, utilities, and platforms is best for you?

We’re here to help you make those tough choices. Specifically, we are focusing on the Node.js and AngularJS frameworks—describing them, comparing them, and making it easier for you to choose. Once you’re done, you will better grasp the difference between AngularJS and Node.js and better understand when to use them.

Now before we look into the Node.js vs AngularJS differences, let us first understand Node.js and its advantages.

What is Node.js? What Are Its Advantages?

Node.js is an open-source, cross-platform runtime environment, library, and development framework used to create server-side and networking JavaScript applications. It also provides developers with a vast library of JavaScript modules that simplify coding.

To strengthen our learning on Node.js vs AngularJS, let us next understand what is AngularJS and its advantages.

What is AngularJS? What Are Its Advantages?

AngularJS is an open-source structural framework developed and maintained by Google. It lets developers use HTML as a template language, and is used to create dynamic, single-page client-side web applications.

Now that we have understood what Node.js and AngularJS is, let us next look into the Node.js vs AngularJS differences.

What Are the Differences Between Node.js and AngularJS?

As you can see by the benefits listed above, both tools have a lot going for them. However, it may serve us better to line up both offerings in a side by side comparison to best illustrate their primary differences. We present to you the following chart:

Node.js vs. AngularJS: Which is Better?

Although this may sound like a cop-out, there is no definitive answer. It depends on what you’re trying to accomplish. You may as well ask, “Which screwdriver is best? A flat-head or a philips-head?” Any competent carpenter or handyperson would reply, “Depends on what kind of screws you’re working with.”

The same principle applies to these tools. Your definition of the best tool depends on the kind of application or web page that you want to design. Are you building a client-side, highly active, and interactive web application? If so, you should use AngularJS. Do you want to develop a data-intensive, real-time, server-side application meant to run across distributed devices? Then you need Node.js.

Therefore, developers should first decide what kind of application project they are working on, then make the appropriate choice.

Why Should You Learn Either One?

There’s no such thing as learning too many things, the easy answer to that question is, “Learn both!” Practically speaking, however, you may be in a situation that requires you to choose one tool over the other. So, under which conditions should you learn AngularJS or Node.js?

However, irrespective of the differences between Node.js and AngularJS, if you get the chance to learn them both, then take it!

And after we've looked into the Node.js vs AngularJS, since we’re talking about learning more:

Do You Want to Increase Your App Development Knowledge?

Knowledge is power, and the more you know about app development, the more powerful a force you can be in today’s programming world. Simplilearn offers a range of courses designed to boost your development skills and make you a more valuable asset in today’s digital marketplace.

For starters, there’s the React.js training course, where you can master the fundamentals of React, a vital web framework for developing user interfaces. Topics include JSX, props, state, and events. This training course dives into Redux, covering topics like reducers, actions, and the state tree.

Considering how widespread Java use is, you should take the Java certification training course. This all-in-one training course gives you a firm foundation in Java, the most used programming language in software development. You will learn about Core Java 8, operators, arrays, loops, methods, and constructors while you gain hands-on experience in JDBC and JUnit framework.

Now You Can Be an App Developer!

Today’s digital world needs more apps than ever, and that means the industry needs more application developers and designers. Simplilearn has the resources you need to jump-start your new career as a developer, whether you decide to focus on AngularJS or Node.js.

If Node.js is more to your liking, there’s Simplilearn’s Node.js certification training course.  The course trains you in Express.js, Node Packet Manager (NPM), shrink-wrap, NPM Vet, REST, Express.js with MongoDB, and SQLite CRUD operations. The training not only focuses on the essential concepts of Node.js but also provides hands-on experience in building an HTTP server.

So, if you want an exciting career that combines staying power and great compensation, then let Simplilearn help you take those first steps to a better future!