Time Management: The Secret to Achieving Your Career Goals in 2022

Panel Discussion: The Startup Career Strategy - The Highs and Lows 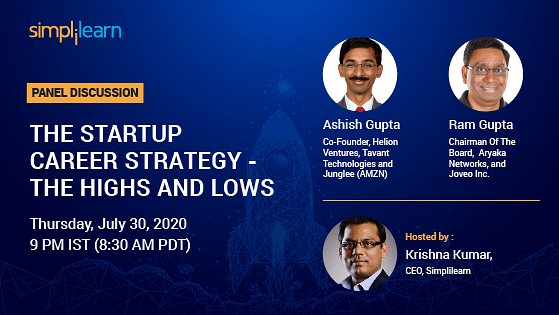 Startups have a lot of excitement and buzz around them. But are they good places to advance a career? Who fits best into startups? What is it like to work in one?

Join us on Thursday, July 30, 2020, at 9 PM IST (8:30 AM PDT) for a conversation with Ashish Gupta, Ram Gupta, and Krishna Kumar. These three entrepreneurial executives will give you insights into:

The live webinar will include a Q&A with Ashish, Ram, and Krishna. (If you can’t make the live webinar, register anyway and we will send you a link to the webinar recording after the event.)

Dr. Ashish Gupta is a co-founder of Helion and serves on several boards including ezetap, Pubmatic, Simplilearn, SMSGupshup, Naukri (NAUKRI) and Qwikcilver. He has co-founded two successful companies - Tavant Technologies and Junglee (AMZN). He has also worked at Woodside Fund, Oracle Corporation, and IBM research. Some of his past investments include Daksh (IBM), Infoedge (NAUKRI), MakeMyTrip (MMYT), MuSigma, Upwork (UPWK), , Redbus (MIH) and Flipkart (Walmart).

Currently, Ram is the Chairman of board of directors at Aryaka Networks and Joveo Inc. He also serves as an Independent director on the board of directors of a number of early and growth-stage companies. Previously, he served as director on the boards of various startups and public companies, including Progress Software (PRGS), S1 Corporation (SONE, acquired by ACI), Platform Computing (acquired by IBM), Persistent Systems (IPO: PRST), Yodlee (IPO: YDLE), Plateau Systems (acquired by SucccessFactors), ThinkGeek (acquired by GameSpot) and Accruent Inc. Acquired by Vista.

Ram served as the President and CEO of Cast Iron Systems, a venture-funded start-up. During his tenure, the company grew to become the largest vendor of application integration technology in the cloud and was acquired by IBM. Prior to that, Ram was an Executive Vice President at PeopleSoft Inc., responsible for strategy, marketing, development, customer service, alliances and mergers and acquisitions. Under his leadership, PeopleSoft’s market capitalization grew from $3 billion to $10 billion and it was acquired by Oracle. Prior to that, Ram was the Senior Vice President and General Manager at venture-funded WebMD Health Corp., where he helped the company grow from a start-up to a public company with a market cap of over $2 billion.

Ram is a member of MENSA and holds several patents in the U.S. He was awarded the Smithsonian Computer World “Search for the Heroes” Award for the year 2000 for his work on a healthcare integration platform. He holds an MS degree in Computer Engineering from the University of Massachusetts, Amherst, and a BS degree in Electronics Engineering from BITS, Pilani, India.

Krishna Kumar is the founder of Simplilearn.