HomeResourcesCareer Fast-trackStudent Spotlight: Transformation from an Industrial Engineer to an Analytics Manager

What is Emotional Intelligence and Its Importance

Student Spotlight: Transformation from an Industrial Engineer to an Analytics Manager 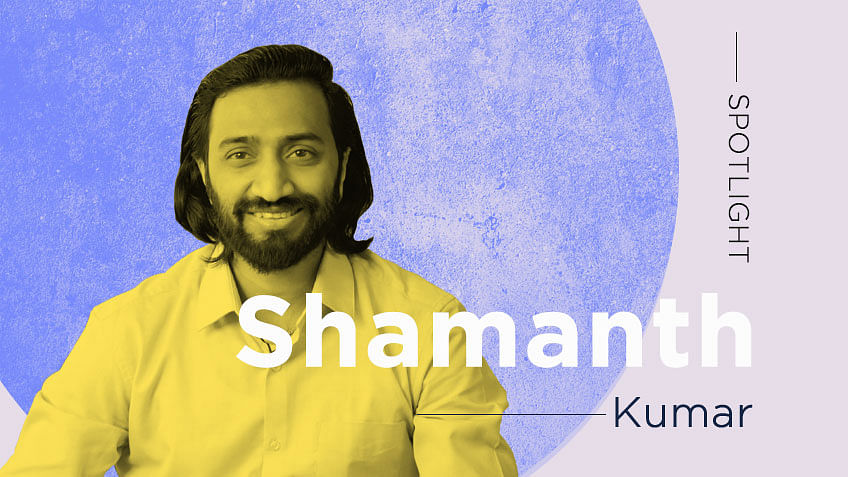 To adapt to dynamic career challenges, people are starting to equip themselves with new and upcoming skills. If you wish to stay relevant and up-to-date with the needs of the digital world, constantly learning new skills is the solution. This Spotlight story is about Shamanth’s career who transformed from an Industrial engineer to an Analytics Manager at his company.

Shamanth worked as an Industrial Engineer for two years at First American India Pvt. Ltd. Since he was always fascinated with data, he changed his domain and got the role of Assistant Manager for Data Analysis and started working in MISD (Multiple Instruction, Single Data).

During his role, he worked primarily with Excel for all the data related work. He was able to work with graphs and pictorial representations, but there was not much he could do on Excel. When the management wanted him to show the top performers or the bottom liners, he wasn’t able to do so. With the amount of data coming in, he felt that there were not enough growth opportunities in Excel.

When he saw his colleagues in different departments working with different tools such as Tableau, Power BI, Data Studio, and R Studio, he observed that they were getting work done in a more in-depth way. Most importantly, this opened his eyes to a whole new field of data analytics.

Since no one was using Tableau in his division, he decided to learn and introduce it to the people in his team.

Initially, Shamanth trained himself through online videos and attending live classes. However, they were not as professional and interactive as he had hoped for. The demos were not well organized and he realized that the instructors were not trained enough to teach them. The instructors lacked interactive and communication skills mostly due to the fact that they were part-timers who were professionals in their own organization. They only focused on basic courses, and not everyone was able to follow their pace. He aspired for experienced trainers and professionals who had an in-depth knowledge of Tableau.

When Shamanth googled Tableau, Simplilearn was the first result that came up. He went through a lot of other sites as well and compared all the curriculums. Simplilearn’s curriculum looked far more advanced and structured than all the rest.

Shamanth’s journey with Simplilearn started in October 2018. When he signed up for the course, he received a call from one of Simpilearn’s sales executives immediately. The sales executive was able to answer all his questions about the course curriculum, the instructors, the amount of interaction they would get with instructors and so on. Even before the course started, he felt that he had good knowledge about how the course would be.

Since Shamanth already had a fair knowledge of data, he was skeptical about the way the instructor would train them. However, after taking up the course, Shamanth said, “The batch was a mix of beginners, moderates and experienced people and the trainer was able to handle all the three types of learners.”

The training period lasted for six weeks. When asked to give his inputs about the course, Shamanth said, “The course was well structured and the quality of training was very good. Some of the highlights from the course were maps, heatmaps, country and state, pictorial representation of maps, tooltip and parameter control.”

The one thing that Shamanth liked the most about Simplilearn’s training process was the surveys taken after every two days. When the trainer was too fast or too slow for some learners, they were able to raise their concerns and the feedback would be incorporated by the trainer.

Shamanth felt that the training was highly interactive because not only was he able to communicate with the trainer, but with other learners from all over the world as well. The chat window allowed everyone to interact with anyone in real time.

Simplilearn’s courses require you to submit a final project before you get certified. When Shamanth learned about this, he was lost and needed direction. He got in touch with his trainer, who helped him in every way throughout his project. He was finally able to finish the project exceptionally well with this additional assistance and get his certification.

Since Tableau was not available in Shamath’s department earlier, he was the first one to introduce it to his team. He even got promoted to the role of Analytics Manager and got a remarkable hike in salary.

Once he became a Tableau certified professional, there were a lot of interview calls he received every day. However, he wanted to implement and leverage this tool for the growth of his own organization. The terminologies he learned (through online assessments which come along with the course) also gave him a wide knowledge to other terms used in data analytics.

In his own words, Shamanth Kumar says, “With this course, I have been able to chase my dream successfully, thank you Simplilearn!”