Difference Between Coding and Programming

Lesson 11 of 23By Kartik Menon 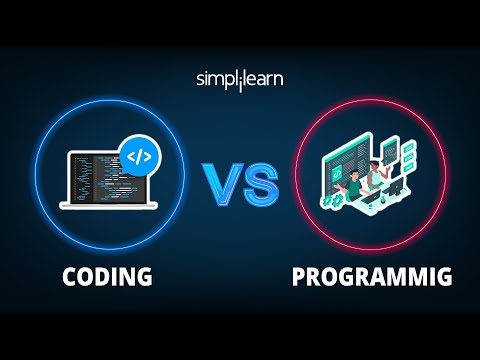 Coding is a computer programming language that helps to communicate with a computer. Computers do not understand human languages. Coding allows humans to communicate with the computer. Code instructs the computer which tasks to be performed and what things to do. Learning code also helps develop applications, websites, and many other things that are ruling the world at present.

These are a few things about coding. Now, have a look at programming in this "Coding Vs Programming" tutorial.

Coding is a process of establishing a successful communication between a software program and the computer hardware. The compilers translate the program into assembly language. The coding process converts the assembly language to Binary Coded Signals

Computer systems are electronic devices that rely on binary coded signals for communication and functioning. The two types of binary coded signals are o’s and 1’s. These signals are generated using switches and transistors. In the process of coding the high-level language and the assembly level languages are translated into binary codes and the communication between the computer hardware and software application is established.

Let us move into the next section and look into the definition of programming. Programming is a different and complex ball game altogether.

Programming is passing the instructions and information to the computer that describes how a program should be carried out. Programming helps computers to perform certain actions. Various types of programming languages available in the market, like C, C++, Java, Python, etc., help develop new and creative technology.

Why Learn Coding and Programming?

There is a lot of difference between coding and programming. Let's look at them in detail through a table format.

Coding professionals need to understand the hardware specifications and need the basics of writing a program to develop compilers and libraries to support the execution of software developed by programmers.

Programming is a superset of computer software development. It also covers the coding part. Yet, the primary region of programming deals with understanding the problem statement and designing a logical solution to the problem using algorithms and flowcharts.

Post the design stage, the next step is to implement the solution using a programming language. Later, you need to fix the errors, and bugs in the pre-production software. The final product is the solution to the problem.

Coding uses traditional code/program editing tools like notepad, notpad++, Eclipse, and so on.

Programming tools are not confined to only editing a program. It involves interoperability between different software applications via data connectors. A software web application might have to store and manipulate data in a database and many more.

The Approach Followed in Coding.

Coding is the fundamental groundwork before creating fully functional software. Hence, the process is full of trials and errors until an operational system is designed to comply with the software program and behave accordingly.

The Approach Followed in Programming.

Unlike coding, programming follows an organized and systematic approach. Programming follows stage-by-stage development and pays significant attention to details to avoid bugs and errors in the production stage.

The goal of coding is simple. It needs to produce an operational communication layer between the software program and the computer system.

Both software coders and software programmers can refer to an ocean of community and resources. The major giants of the community are StackOverflow, and GitHub, they stand in the top position when it comes to resources.

So, with that, you have come to an end of this Coding Vs. Programming tutorial.

Benefits of Learning Coding and Programming

By learning coding and programming, there are many benefits. Now, have a look at some.

If you want to build your career in IT, explore Simplilearn's Software Development Courses. Visit Simplilearn's website for more information on the courses provided. The courses offered by Simplilearn are dedicated to every level user.

If you have any questions about this tutorial on "Coding Vs Programming", mention them in the comment section below. We have our experts resolve all your doubts and queries right away.