What is Cloud Computing and Who Uses Cloud Services?

How to Become a Cloud Engineer

AWS vs Azure: Which Cloud Platform Should You Choose in 2022?

Lesson 4 of 6By Simplilearn 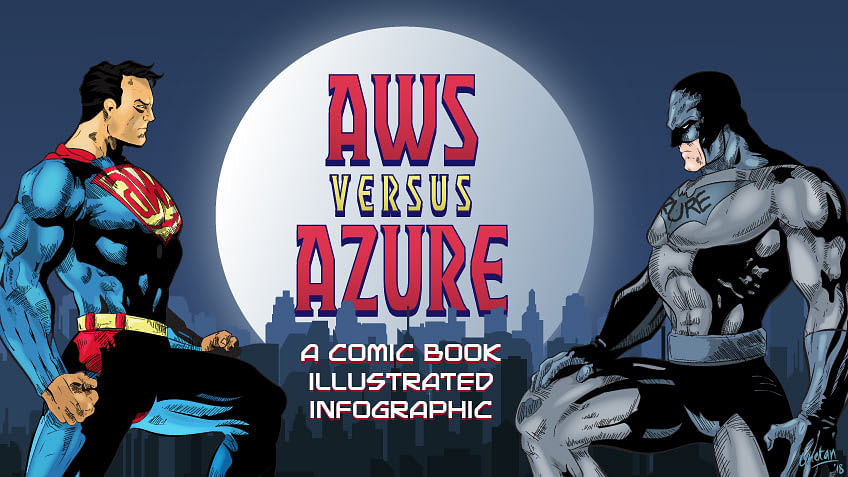 Cloud service providers like Microsoft Azure and AWS have more in common with superheroes than one might think. Cloud storage companies touch the lives of millions; often making the world a better place.

In the battle of AWS vs Azure, Azure and AWS are superheroes in their own rights—but, who is on the top of the cloud?

A superficial glance might lead you to believe that AWS has an unprecedented edge over Azure, but a deeper look will prove the decision isn’t that easy. To determine the best cloud service provider, one needs to take multiple factors into consideration, such as cloud storage pricing, data transfer loss rate, and rates of data availability, among others.

From elementary schools to NASA, clouds have touched every sphere of our lives. Who said superheroes are just found in comic books?

Let us begin with to know the winner of the AWS vs Azure battle.

AWS vs Azure: The Origins of AWS

In the early 2000s, Amazon was forced to re-examine its development platforms as they catered to their third-party clients. Over the years, they had created a jumbled mess of IT infrastructure where multiple teams worked in silos—often performing the same tasks—with no thought given to efficiency. In an effort to improvise, Amazon’s software team detangled the mess that was their infrastructure and replaced it with well-documented APIs. All was quiet until 2003 when, during a retreat, Amazon executives realized that they had the skills necessary to operate and execute scalable, effective data centers. The rest is history.

AWS is the world’s leading provider of cloud solutions, providing IT infrastructure solutions on an as-needed basis for companies of all sizes. Prominent companies that utilize AWS include Netflix, Expedia, Hulu, Spotify, and Ubisoft. AWS is a complex and highly customizable platform that works best for companies that run non-Windows services.

Why Do We Fall? AWS and Cloud Domination

In the AWS vs Azure battle, AWS had an unprecedented upper hand. AWS was first launched in 2002 and its earliest competitor, Google, didn’t arrive until  2009. Microsoft didn’t step into the cloud market until 2010. Microsoft believed that the cloud infrastructure was just a trend that was soon going to fade away. However, after Amazon’s success, Microsoft had to play catch up.

When Azure first launched, it was not received well and faced many challenges, especially when compared to AWS. AWS had been running for almost 7 years and as a result, they had more capital, more infrastructure, and better and more scalable services than Azure did. More importantly, Amazon could add more servers to its cloud infrastructure and make better use of economies of scale—something that Azure was scrambling to do. This was a setback for Microsoft—not only was Microsoft dethroned as the leader in software infrastructure, but it was now being shown the door by a non-IT newbie.

Mind If I Cut In? Azure’s Redemption

The tide soon changed for Azure. Microsoft quickly revamped its cloud offering and added support to a variety of programming languages and operating systems. They made their systems more scalable and made peace with Linux. Today, Azure is one of the leading cloud providers in the world.

AWS vs Azure: Making the World a Better Place

Both Amazon and AWS technologies have, in their own way, contributed to the welfare of society.

For example, NASA has used the AWS platform to make its huge repository of pictures, videos, and audio files easily discoverable in one centralized location, giving people access to images of galaxies far away.

Similarly, People in Need, a nonprofit organization, uses AWS to scale an early warning system that alerts about 400,000 people in Cambodia when floods threaten. This technology has not only helped save hundreds of lives but has also made available a cost-effective method that can be replicated by other at-risk regions.

The Azure IoT Suite was used to create the Weka Smart Fridge, which keeps vaccinations properly stored. This has helped nonprofit medical agencies ensure that their vaccinations reach people who otherwise don’t have access to these facilities.

Aggressive Expansions - AWS vs Azure: Which is Better?

However, in its recent Q1 FY 2018 earnings report, Microsoft's revenue from Azure grew over 90% this year, doubling the growth rate of AWS.

The Game Has Changed - The Cloud is the Future: Are You Ready?

Companies that are ill-equipped to handle these changes could run the risk of falling behind.

Due to this need for certified professionals, a huge demand for skilled employees has been largely unmet. LinkedIn reports that cloud and distributed computing topped the list of sought-after skills in both 2016 and 2017. Dice reports that job listings for the AWS cloud platform increased by 76 percent between 2015 and 2016. In 2015, 3.9 million jobs were affiliated with cloud computing in the United States and over 18 million worldwide. For qualified professionals, salaries are very high and competitive. According to Forbes, jobs in cloud computing are well compensated with an average salary of $125,591 for AWS certified professionals.

With the onset of cloud computing, several major cloud providers quickly rose to dominance but today, AWS and Azure lead the industry. These two cloud hosting platforms drive much of the job growth in the cloud computing space which leads to a dilemma for job seekers.  With both AWS and Azure as dominant players in the market, which cloud certification makes the most sense for your career path? Should you pursue AWS certification or Azure certification? There are benefits and drawbacks to each certification which should be considered before choosing which one to pursue.

The Awakening - AWS vs Azure: The Certification Game

When it comes to the differences between AWS vs Azure, there are plenty. Both come with their own advantages and disadvantages. AWS and Azure are the two top players in the cloud technology space because both are very good at what they provide in different ways. In order to narrow down which platform is the right one to become certified in, an evaluation of the benefits of each certification is warranted.

The Benefits of AWS Certification: Although Azure is rapidly gaining market share, AWS is still by far the largest cloud computing service provider in the world today. AWS certification carries extra weight because of additional marketability due to the number of companies utilizing the platform. In addition, AWS certification grants access to the AWS Certified LinkedIn Community and other AWS certified professionals.

Both AWS and Azure are considered to be adaptable, reliable, and resolute—much like the superheroes, we all admire. They help us solve global problems and make our lives easy. They adapt to the needs of their customers and lend a hand to governments and companies in solving various social and logistical issues. Sure, superheroes have helped their citizens and kept them safe, but cloud service providers like AWS and Azure have helped professionals revolutionize their industries without having to break the bank. Cloud systems have made it possible for companies like Uber, Salesforce, and Facebook to exist—all services we take for granted today.

The article has explained, the pros and cons, and the differences between AWS vs Azure. So who’s to say what will come next? In 2015, no one thought Azure could catch up; but they’ve proven the naysayers wrong. The cloud wars are unpredictable and exciting. Who would you count on - AWS or Azure? Will Azure overtake AWS? Will Google Cloud be the underdog that will disrupt the cloud domain? Only time will tell. But one thing is certain - the battle between AWS vs Azure may continue, but the cloud is here to stay.

A Note from the Illustrator

I love "Raiders of the Lost Ark" like many people out there and so we structured the story based on it. The way the heroes in the comicographic take punches, that's Indy. The comicographic does not have a definite conclusion and curiosity is maintained with the rat at the end, that's all Raiders! The film's soundtrack was the real power-booster for me while I illustrated the comicographic for 2 months, I even dreamt about the music after I was done working on it! It is the finest popcorn movie ever made, the only reason it's not the greatest blockbuster film ever made is that it wasn't the 1975 movie with a certain Shark named Bruce dying in the end.

It's a real thrill paying homage to some of my favorite comic book artists through the comicographic like--Jack Kirby, Alex Ross, Jim Lee, Frank Cho, and many more. - Chetan Ramesh