Lesson 3 of 8By Simplilearn 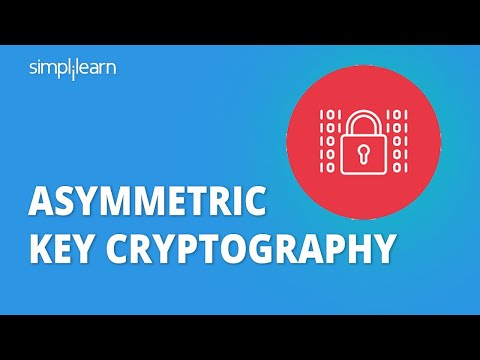 With censorship becoming increasingly prevalent in today’s world, encryption has allowed everyone to have a  firm hold of their private information. Asymmetric encryption, also known as asymmetric-key cryptography, has become a staple in digital security, thanks to its multiple applications and varied advantages.

What is the need for Asymmetric Key Cryptography?

Look at the following story to understand the need for asymmetric key cryptography.

Joe is a journalist who needs to communicate with Ryan over long-distance messaging. If you have read Simplilearn’s article on symmetric encryption, you already know that there is a single key for both encryption and decryption of data in such a system. This key must be kept secret and should belong to the sender and receiver of the messages only. Because of the critical nature of the information, Joe uses symmetric encryption while sending his messages to prevent them from falling into the wrong hands.

However, the tricky part comes when Ryan needs to receive the decryption key for the encrypted data.

You face a critical problem here when it comes to the key exchange. The encrypted messages in transit are not a risk to either sender or receiver since unauthorized people can’t read the contents. But the decryption key, on the other hand, if intercepted, exposes all the information Joe has to disclose to Ryan.

This is the dilemma asymmetric encryption has fixed because of its multi-key architecture. Now, this tutorial will take you through its entire workflow.

What is Asymmetric Encryption?

As you can see in the above image, using different keys for encryption and decryption has helped avoid the problem of key exchange, as seen in the case of symmetric encryption.

To understand the asymmetric key cryptography architecture clearly, consider the process of sending and receiving letters via physical mailboxes.

As shown below, anyone who has the postal address of the receiver (public key in our case) can send any message they want.

However, only the receiver can read all his/her messages thanks to the mailbox key that no other person can have.

Now that you understand the base terminology and process behind asymmetric key cryptography, this tutorial will take you through its applications.

Where is Asymmetric Key Cryptography used?

Asymmetric key cryptography has found use in many authentication domains thanks to its thorough identity verification process. Some applications are as follows:

This contrasts with symmetric encryption, where the single key used for both encryption and decryption is supposed to be kept secret, hence called private key cryptography.

Now, have a look at the most widely used asymmetric key cryptography algorithm today.

What Is RSA Encryption?

RSA encryption is an asymmetric encryption algorithm named after its founders (Rivest, Shamir & Adleman) that uses block cipher methodology to encrypt data. It has been adopted worldwide in many industries like VPNs, chat applications, browser authorization, and email encryption, to name a few.

RSA algorithm is also used for the signing of documents, where the sender can sign a document using his own private key, and the receiver verifies the document using the sender’s public key. Since both keys are mathematically linked, it is impossible to replace either of the keys with a fraudulent piece.

In the next section, you will go through the reasons why asymmetric key cryptography is widely accepted today as one of the most secure and reliable forms of encryption.

What Are the Advantages of Using Asymmetric Key Cryptography?

This brings an end to this tutorial on asymmetric-key cryptography.

With this, you would have understood the importance of symmetric key cryptography in today’s internet sphere and its value in safeguarding our privacy and security. With many bases to cover in cybersecurity, cryptography is one of the most crucial aspects, even though several other topics are essential to excel as a cybersecurity expert.

This tutorial started by explaining the need for asymmetric encryption, its working and applications, justifications for being named public-key cryptography, and its advantages over its counterpart. Hope this article gave you clarity on Asymmetric encryption.

Do you have any questions for us? Please mention them in the comment section of this article and we’d be happy to have our experts answer them for you.