Everything You Need to Know About CSS Hover Effects 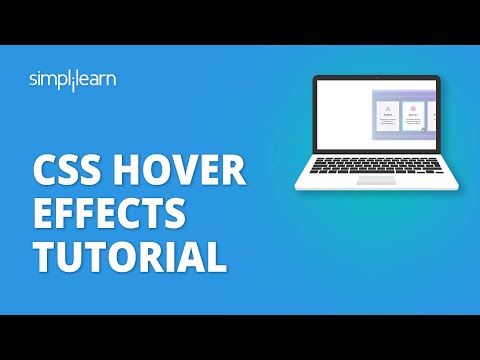 CSS is a stylesheet language that describes the presentation of an HTML document. CSS describes how elements will look on screen, on paper, or in other media. It is used to define your web page’s styles, including the design, layout, and variations in display for different devices and screen sizes. Here you will learn about the CSS hover effect which adds the effects when the elements hover over it.

What is a CSS Hover Effect?

A CSS hover effect takes place when a user hovers over an element, and the element responds with transition effects. It is used to mark the key items on the web page and it’s an effective way to enhance the user experience.

Let’s understand it by using some examples

In this example, you will create a link that will change the color when hovered over.

Here is an illustration to show some more hover effects you can use on your page.

How to Use Hover CSS?

When a user hovers over an element in CSS, the element responds by triggering transition effects. It is an efficient approach to improve user experience and is used to highlight the important elements on the web page.

What Is the Best CSS Hover Effect?

An otherwise uninteresting website can benefit from the addition of CSS link hover effects. Here are a few best CSS effects that you can utilize in your next project if you have ever struggled to create a stylish hover effect.

This effect changes the color of the link text and adds a box shadow to the inline link. To avoid the padding from interrupting the flow of the text, we first apply padding around the link before adding a negative margin with the same value. Instead of using the background property since it prevents transitions, we will utilize box-shadow.

2. The Effect of a Text Swappin' Link Hover

Here's a cool one where, when the mouse hovers over the link, some other text replaces the link's text. The linked text slides out when fresh text slides in as you hover over the text. This link hover effect involves quite a bit of deception. However, the secret ingredient defines the text that slides in and calls it with the content property of the link's::after pseudo-element using a data attribute.

In this example, you will look at adding some hover effects in combination with transitions to the buttons.

There is a nice button that will respond in different ways when hovered over.

How to Create a CSS Hover Animation?

Let's start with the HTML markup:

How to Set up the Animation Property?

The following are represented by the shorthand property for:

Note: Always specify the animation-duration property, otherwise the duration is 0, and will never be played.

Indicates the duration in seconds or milliseconds of an animation.

Specifies the amount of time before the animation begins.

Sets the number of times that animation should be played.

If a CSS property's value can change over a predetermined period, it is animated. Using CSS Animations or CSS Transitions, specific CSS properties can be animated. Because animating them would result in complicated recursive behavior, CSS properties that define animation parameters like animation-direction and animation-name are not animatable.

The following CSS properties are animatable:

Use Keyframes to Define the CSS Hover Animation Sequence.

The keyframe percentages can be listed in any order; they will be processed according to the order in which they should occur.

Browsers will utilize the element's pre-existing styles for the start and end states if a keyframe rule doesn't define them (0 percent /from and 100 percent /to).

Using this, you may animate an element from its starting point to its final state.

Keyframe rules disregard attributes that cannot be animated, while supported properties can still be animated.

In this tutorial, you have seen how CSS hover effects allow you to add responsive effects and transition over your elements. You have also learned about some properties that will help you to make a better hover effect.

With a strong foundational understanding of CSS, you can go ahead and upskill yourself by enrolling in Simplilearn’s  Post Graduate Program in Full Stack Web Development course which is in collaboration with Caltech CTME. This course will guide you through your journey to master the Full Stack development  covering all aspects from basic to advanced level.

In case you have any queries or feedback with respect to this CSS hover effect tutorial, let us know in the comments section below. Our experts will get back to you at the earliest.