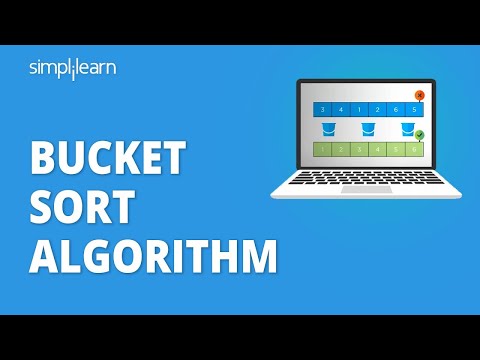 The bucket sort algorithm is an advanced sorting technique, in contrast to others. Bucket sort can be considered as a collective framework built using a variety of sorting algorithms.

For example, you can use one of the types of algorithms to sort elements into buckets and another to sort elements within buckets. You could even recursively implement the algorithm you initially chose to sort each bucket to minimize lines of code.

Because of this adaptability, bucket sorting becomes slightly more complex but also the most versatile.

What Is a Bucket Sort Algorithm?

The bucket sort method is as follows:

Moving ahead with this tutorial, you will now look at how the bucket sort algorithm works.

Working of a Bucket Sort Algorithm

If you take an integer as input, you must divide them by ten to obtain the floor value.

Make a one-dimensional array of size ten and fill it with zeros at first. Each array slot serves as a bucket for storing elements.

Similarly,0.39 is placed in the same bucket. Every time, the floating-point number's floor value is taken.

Following the understanding of the its working procedure, you will now look at the pseudocode of the bucket sort algorithm.

Pseudocode and an Algorithm of the Bucket Sort Algorithm

Pseudocode of the Bucket Sort

Let list denote the array to be sorted, and B the number of buckets used. The maximum key value in linear time can be computed by iterating over all the keys once. Use the floor function to convert a floating number to an integer. Sort is a sorting function that is used to order each bucket. In most cases, insertion sort is used, but other algorithms, such as selection sort and merge sort, can also be used.

Algorithm of the Bucket Sort

You will now learn about the complexity of the bucket sort.

The complexity of the Bucket Sort Algorithm

The Time Complexity of the Bucket Sort Algorithm

Bucket Sort's time complexity is largely determined by the size of the bucket list as well as the range over which the array/element lists have been distributed.

The Space Complexity of the Bucket Sort Algorithm

So the space complexity of the bucket sort is O(n+k).

Following the understanding of the complexity of the bucket sort, you will now see some of its variants.

The bucket sort has the following variations:

Postman's sort is a bucket sort variant that takes advantage of a hierarchical structure of elements, typically described by a set of attributes.

Letter-sorting machines in post offices use the following algorithm: Mail is first separated into domestic and international categories, then by state, province, or territory, then by the destination post office, then by routes, and so on.

A histogram is a rough representation of the numerical data distribution. Karl Pearson was the first to use it. The first step in creating a histogram is to "bin" (or "bucket") the range of values, which means dividing the entire range of values into a series of intervals and then counting how many values fall into each interval.

The following variant of bucket sort, known as histogram sort or counting sort, includes a first pass that counts the number of elements placed into each bucket using a count array.

Using these details, the array values can be arranged into buckets utilizing a series of exchanges, leaving no room for bucket storage overhead.

ProxMap Sorting takes a unique approach to sort that is conceptually similar to hashing. This method employs a variation on hashing with buckets, but with buckets of varying sizes.

ProxmapSort works in the same way as bucket sort in that it divides an array of keys into subarrays using a "map key" function that preserves a partial ordering on the keys; as each key is added to its subarray, insertion sort is used to keep that subarray sorted, resulting in the entire array being in sorted order when ProxmapSort finishes.

The most common bucket sort variant takes a list of n numeric inputs ranging from zero to some maximum value M and divides the value range into n buckets of size M/n each. If each bucket is sorted using insertion sort, the sort can be demonstrated to take the expected linear time.

Comparison of Bucket Sort Algorithm With Other Algorithms

Here are some comparisons with other sorting algorithms.

The n-way merge sort algorithm, like bucket sort, begins by dividing the list into n sublists and sorting each one; however, the sublists made by mergesort have overlapping value ranges and thus cannot be recombined by simple concatenation. Instead, a merge algorithm must interleave them.

Bucket sort is a generalization of counting sort; in fact, bucket sort degenerates to counting sort if each bucket has size 1. Bucket sort's variable bucket size allows it to use O(n) memory rather than O(m) memory, where m is the number of different values; in exchange, it forgoes counting sort's O(n + m) worst-case behavior.

Top-down radix sort is a subset of bucket sort in which both the range of values and the number of buckets are limited to powers of two. As a result, the size of each bucket is also a power of two, and the procedure can be repeated. This method can shorten the scatter phase because we only need to examine each element's bit representation prefix to determine its buckets.

Bucket sort with two buckets is essentially a quicksort variant in which the pivot value is always chosen to be the median value of the value range. While this method works well for uniformly distributed inputs, other forms of selecting the pivot in quicksort, such as randomly chosen pivots, make the input distribution more resistant to clustering.

In the next section of this tutorial, you will see some applications of the bucket sort algorithm.

When bucket sorting is used, one of the following conditions must be met:

Your next topic will be the bubble sort algorithm, which you will go over in great detail.

If you are perhaps looking for a comprehensive work-ready training that covers front-end, middleware and back-end development technologies, Simplilearn’s Post Graduate Program in Full Stack Web Development is the one you should be looking at. This course offers you an in-depth study that goes beyond Data Structure and covers the most in-demand programming languages and abilities today. It's time to go out and explore.

Do you have any further queries about the Bucket Sort Algorithm? If you do, please leave them in the comments section at the bottom of this page. Our experts will get back to you as quickly as possible!