Lesson 28 of 54By Simplilearn 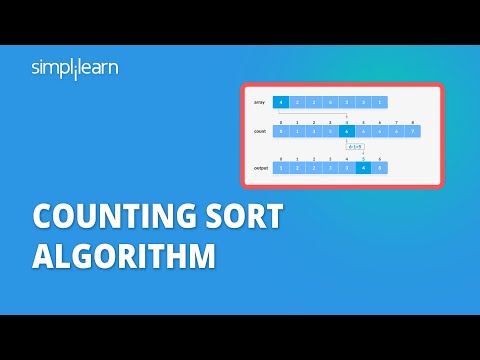 The Counting Sort algorithm sorts keys that are small integers and fall inside a particular range. It works by calculating the number of elements with each unique key value. After that, it performs specific mathematical calculations to sort each key value.

What Is a Counting Sort Algorithm?

In the next section, you will discover the working procedure of the counting sort algorithm after knowing what it is.

Iterating through the input, counting the number of times each item appears, and utilizing those counts to compute each item's index in the final, sorted array is how counting sort works.

The Pseudocode of Counting Sort

The Algorithm of Counting

After learning pseudocode and the counting sort method, you will now look at its complexity in this article.

The Complexity of the Counting Sort Algorithm

The worst-case scenario for temporal complexity is skewed data, meaning that the largest element is much larger than the other elements. This broadens the range of K.

As a result, the worst-case time complexity occurs when the range k of the counting sort is large.

To calculate the average case time complexity, fix N and take various values of k from 1 to infinity; in this scenario, k computes to (k+1/2), and the average case is N+(K+1)/2. However, because K approaches infinity, K is the essential element. Similarly, varying N reveals that both N and K are equally dominating, resulting in O(N+K) as the average case.

You employed an auxiliary array C of size k in the above procedure, where k is the maximum element in the given array. As a result, the Counting Sort algorithm has an O space complexity (k).

The Complexity of Space: O (k)

You will now compare counting algorithms with various sorting methods in this tutorial.

Comparison With Other Sorting Algorithms

Moving ahead in this article, you will look now at several uses of the counting sort algorithm.

Finally, in this tutorial, you will implement code for counting sort.

With this, you have come to an end of counting sort algorithm articles.

The Post Graduate Program in Full Stack Web Development from Simplilearn offered in collaboration with Caltech CTME will be ideal for you if you want a more comprehensive study that goes beyond Data Structure and algorithms and covers the most in-demand programming languages and skills today. It's time to get out there and explore.

Do you have any questions about this Counting Sort Algorithm tutorial? Please leave them in the comments section at the bottom of this page if you have any. Our experts will respond as quickly as possible!