Linked List in A Data Structure: All You Need to Know

Lesson 3 of 22By Simplilearn 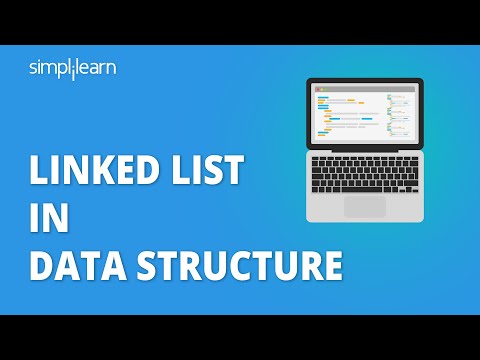 A linked list is the most sought-after data structure when it comes to handling dynamic data elements. A linked list consists of a data element known as a node. And each node consists of two fields: one field has data, and in the second field, the node has an address that keeps a reference to the next node.

Here, the start pointer stores the address of the first node, and at the end, there is a null pointer that states the end of the Linked List.

Creation of Node and Declaration of Linked Lists

It is a declaration of a node that consists of the first variable as data and the next as a pointer, which will keep the address of the next node.

Here you need to use the malloc function to allocate memory for the nodes dynamically.

The linked list mainly has three types, they are:

A singly linked list is the most common type of linked list. Each node has data and an address field that contains a reference to the next node.

Circular link lists can either be singly or doubly-linked lists.

In this operation, you will display all the nodes in the linked list.

When the temp is null, it means you traversed all the nodes, and you reach the end of the linked list and get out from the while loop.

You can add a node at the beginning, middle, and end.

Insert at the Beginning

Insert at the End

Insert at the Middle

You can also do deletion in the linked list in three ways either from the end, beginning, or from a specific position.

Delete from the Beginning

Delete from the End

Delete from the Middle

The search operation is done to find a particular element in the linked list. If the element is found in any location, then it returns. Else, it will return null.

Code to Insert at the Beginning of the Linked List

Code to Insert at the End of the Linked List

Code to Insert at the Middle of the Linked List

Code to Delete From the Beginning of the Linked List

Code to Delete From the End of the Linked List

Code to Delete From the Middle of the Linked List

Code to Search for an Element From the Linked List.

Code to Show Data Elements of the Linked-List

With that, you have reached the end of this tutorial on Linked Lists.

Looking forward to a career in Data Analytics? Check out the Data Analyst Training Program and get certified today.

“Stack in data structure” can be next in the line of news topic. It makes sense to learn about stack representation, implementation, and application, where stack plays a vital role.

If you are perhaps looking to build a career in data analytics, do explore Simplilearn’s Post Graduate Program in Data Analytics in partnership with Purdue University & in collaboration with IBM. Featuring ask-me-anything sessions from IBM, a masterclass from Purdue, and many great benefits, this program will give you the work-ready data analytics training you need to succeed today.

If you have any queries regarding linked lists in data structures, please feel free to comment below. Our experts will be happy to resolve your question as soon as possible.