Lesson 12 of 54By Simplilearn 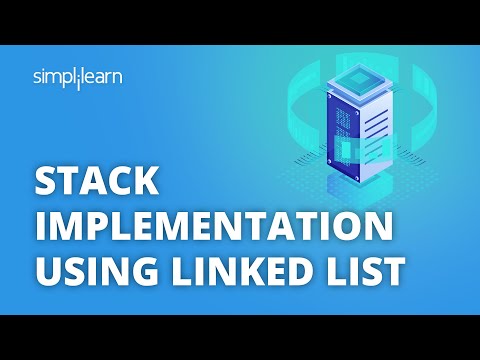 We already knew that linked lists allocate memory dynamically. Stack implementation using linked-list, the nodes are maintained in non-contiguous memory. Each node contains a pointer to the immediate next in line node in the Stack.

In Stack, implementation using Linked-List, every new element inserted to the top of the Stack which means every new inserting element pointed by the top and whenever we want to delete element from the Stack which is pointing to the top of the Stack by moving the top by moving top to is the previous node in the linked -list. The following field of the first element must always be NULL. There is an overflow condition in the Stack if the space left in the memory heap is not sufficient to create a node.

Adding a new node in the Stack is termed a push operation.

Pushing a node in the linked list is quite different from inserting an element in the array. Push operation on stack implementation using linked-list involves several steps:

Deleting a node from the Stack is known as a pop operation.

The popping node from the linked list is different from the popping element from the array. To perform the pop operation involves the following steps:

There is some pros and cons of stack implementation using linked-list:

Linked-list is a dynamic data structure, so it can grow and shrink at runtime by allocating and deallocating memory.

In linked lists, the size can be increased and decreased at the run time leading to no memory wastage.

More memory is required to store elements in a linked list because each node contains a pointer in the linked list, and it requires extra memory for itself.

Node traversal in linked lists is quite tricky. For example, if we want to access a node at position n, then we have to traverse all the nodes before it. So the time required to access a node is large.

Reverse traversing in stack implementation using linked-list is quite tricky because extra memory is required for back pointer hence wastage of memory.

With this, we came to the end of the stack implementation using linked-list articles.

If you have any questions regarding the "stack implementation using linked-list" article, please feel free to ask in the comment section below. We will be pleased to resolve your problems as soon as possible. Until then, stay safe and please keep tuned with the Simplilearn channel.