10 Reasons That Explain Why You Need To Learn Java

Lesson 1 of 33By Ravikiran A S 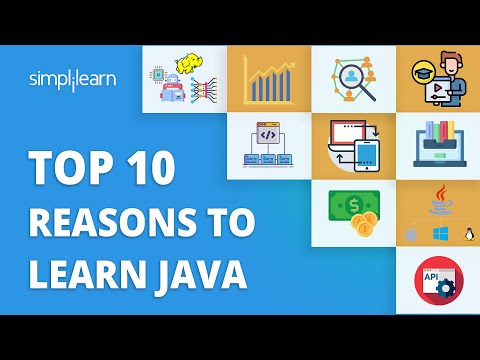 In this article on 10 Reasons That Explain Why You Need To Learn Java, we will give a brief walkthrough that explains to you the criticality to learn Java in 2021.

It was in the year 1991; Sun Microsystems made history. The quest was to design a programming language for the Television set-top box. James Gosling (father of Java) himself would have never predicted that he was about to lay the foundations for the IT industry's future.

Java follows the simplest and readable form of writing code with the most sophisticated syntax of an object-oriented programming language. Not only these, but Java claims to have multiple advantages that give it a strong edge over other programming languages.

The first important reason out of the ten to Learn Java is Java's beginner-friendly and competitive edge nature.

The best part while you learn Java is its beginner-friendly nature. The syntax of Java matches a lot with its predecessors, C, C++, etc. Of course, Java has inherited its predecessors, but also, Java comes with some advanced features to help programmers in real-time.

The object-oriented programming nature of the language makes it more precise, readable, and the best in class when it comes to getting started with real-time projects, even at the beginner's stage.

Moving ahead, we will learn the dramatic and updated features of the Java programming language that makes it a dominant competitor to its allies.

It is found that beginners these days are in a dilemma if they want to learn Java. Such a dilemma is because beginners still believe the myth that says Java is an old, outdated, and obsolete programming language.

But in reality, Java is going through an unthinkable evolution that brought up many remarkable changes and add-ons to the programming language. The latest commercial version of Java from the oracle corporations is the Oracle Java 15

Java 15 comprises the latest text blocks, a foreign-memory access API, hidden classes, Z Garbage Collector, and the sealed classes previews, pattern matching, and records. Java 15, for now, is treated as a short-term release, as it is supposed to be operational for six months with Oracle Premier Support until JDK 16 arrives.

Up next, we will learn the most important reasons out of the ten, and the only reason for Java to become the industry leader. That is the code portability (platform independence) and versatility.

Java follows a fundamental principle that worked well for Java to date. The "Write Once, and Run Anywhere" principle. Now, Java uses a software tool that comes along with the Java download file. It is called the Java Virtual Machine (JVM).

The primary objective of JVM is to convert the code written in the user's language into machine level language (ByteCode), and then the interpreter will compile and execute the code. The same protocol is followed regardless of the type of the host operating system.

Next, the language's object-oriented nature makes Java-capable bind the data members and data manipulating methods together. Data binding makes the data to be more secure. Not just security, Java is also capable of working with various resources and working over the network.

Followed by platform independence and the versatile nature of Java, we have the open-source library support of Java.

Java is commercialized. But most of the java features are still open-source and can also be used for building beginner level and small-scale projects. Also, Java has a huge and never-ending ocean of libraries and support files.

Java has the support of libraries such as Apache Commons, Google Guava, Maven, and so on.

Moving ahead, we have the Java EE and Java API.

Java's Enterprise Edition adds up the advanced features and sophisticated specifications to Java, in collaboration with Java Standard Edition. Java EE enables Java developers to work with advanced level and real-time projects in the IT industry.

Apart from Java EE, the API support in Java took the programming language to the next level. The developers in Java can integrate back-end, front-end, and supporting libraries to create a new application. The best part is, the developers do not have to worry about the complex internal code implementations.

Advancing, we have rich community support as the next feature.

Java has been around for a couple of decades now and can also be considered as one of the oldest prevailing programming languages compared to its allies. Many developers use Java for multiple problems. There are high chances that most of the problems will already be available, as the solution approach could be tried and tested already.

Apart from this, there are numerous communities and groups on the internet and social media, respectively. The fellow developers in the communities are enthusiastic about assisting and resolving the issues faced by other developers and beginners.

Now, moving ahead, we have a wide range of development tools in Java.

So far, Java is the current IT industry leader, and the most sought programming language for developing a wide range of software and applications.

The reason for this is that they also develop a variety of software development tools for assistance. To name a few, we have

Advancing to the next level, we have a major dependency on Java.

Java is a powerful language, the reason which most of the applications, regardless of which sector it is, are built using Java. Java is everywhere.

Multiple Applications are dependent on Java, to name a few; we have the following:

Up next, we have the never-ending demand for Java Developers.

Java Developers are one of the high paid developers out here in the IT industry, and this is because of the widespread dependency on the Java Programming language.

Salaries of Java developers are mentioned below.

Next, we learn the dominance of Java over its allies.

According to a recent survey, the Java programming language is in the top three positions by leading against its allies.

The following charts justify the point in a much detailed way.

So with that, we have reached the end of this "10 Reasons That Explain Why You Need to Learn Java" article.

Java EE can be your next stop. Java Enterprise Edition will help you learn the extended capabilities of Java in real-time distributed computing and web applications.

The link to your next step is here, Java Enterprise Edition.

If you are looking to enhance your skillset and gain in-depth knowledge about the Java programming language, to get yourself certified as an Expert Java developer. Feel free to explore Simplilearn's Java training and certification program. Designed by experts and delivered by practitioners, this program could be what you are looking forward to learning. Check out the Full Stack Java Developer Master's Program from Simplilearn today!

If you have any questions about this "10 Reasons That Explain Why You Need to Learn Java" article, please leave them in the comments section towards the end of this article, and our team of experts will answer them for you at the earliest!