The Ultimate Guide To Cross-Validation In Machine Learning

Lesson 20 of 33By Simplilearn 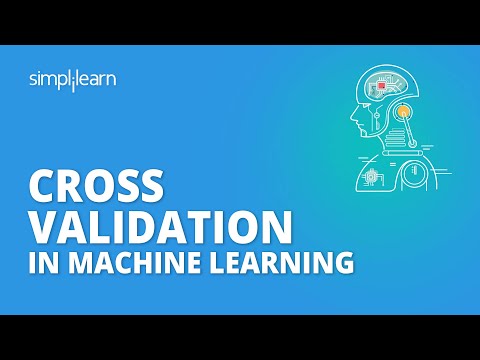 How do we know if our model is functional? If we have trained it well? All of this can be determined by seeing how our model performs on previously unseen data, data that is completely new to it. We need to ensure that the accuracy of our model remains constant throughout. In other words, we need to validate our model.

Using cross-validation in machine learning, we can determine how our model is performing on previously unseen data and test its accuracy.

Why Do Models Lose Stability?

Any machine learning model needs to consistently predict the correct output across a variation of different input values, present in different datasets. This characteristic of a machine learning model is called stability. If a model does not change much when the input data is modified, it means that it has been trained well to generalize and find patterns in our data. A model can lose stability in two ways:

In Figure 1, we can see that the model does not quite capture all the features of our data and leaves out some important data points. This model has generalized our data too much and is under fitted. In Figure 2, our model has captured every single aspect of the data, including the noise. If we were to give it a different dataset, it would not be able to predict it as it is too specific to our training data, hence it is overfitted. In figure 3, the model captures the intricacies of our model while ignoring the noise, this model is our optimal model.

While choosing machine learning models, we need to compare models to see how different models perform on our dataset and to choose the best model for our data. However, data is usually limited, our dataset might not have enough data points or may even have missing or wrong data. Further, if we have fewer data, training, and testing on the same portion of data does not give us an accurate view of how our model performs. Training a model on the same data means that the model will eventually learn well for only that data and fail on new data, this is called overfitting. This is where cross-validation comes into the picture.

Cross-Validation in machine learning is a technique that is used to train and evaluate our model on a portion of our database, before re-portioning our dataset and evaluating it on the new portions.

This means that instead of splitting our dataset into two parts, one to train on and another to test on, we split our dataset into multiple portions, train on some of these and use the rest to test on. We then use a different portion to train and test our model on. This ensures that our model is training and testing on new data at every new step.

This also exposes our model to minority classes which may be present in the data. If we split our data into two and train only on one part, there is a chance that the test data contains a minority class that was not present in the testing data. In this case, our model will still perform well as the class constitutes only a small portion of the dataset but it will be desensitized to that data.

Figure 5: Training and testing with our portioned dataset

We then choose a different portion to test on and use the other portions for training. Then, the model performance is re-evaluated with the results obtained from the new portioned dataset to get better results.

Step 1: Split the data into train and test sets and evaluate the model’s performance

The first step involves partitioning our dataset and evaluating the partitions. The output measure of accuracy obtained on the first partitioning is noted.

Figure 7: Step 1 of cross-validation partitioning of the dataset

Step 2: Split the data into new train and test sets and re-evaluate the model’s performance

After evaluating one portion of the dataset, we choose a different portion to test and train on. The output measure obtained from this new training and testing dataset is again noted.

This step is repeated multiple times until the model has been trained and evaluated on the entire dataset.

Step 3: To get the actual performance metric the average of all measures is taken

There are various ways to perform cross-validation. Some of the commonly used models are:

The dataset is split into k portions one section is for testing and the rest for training.

Another section will be chosen for testing and the remaining section will be for training. This will continue K number of times until all sections have been used as a testing set once.

Figure 14: Splitting a dataset for LOOCV

Another point will be chosen as the testing data and the rest of the points will be training.

This will repeat for the rest of the dataset,  i.e.: N times.

The final performance measure will be the average of the measures for all n iterations.

In normal cross-validation, the data is divided without keeping in mind the distribution of individual classes. The model, thus cannot properly predict for minority classes.

Figure 18: Division of data in cross-validation

Stratified K-folds overcomes this by maintaining the same percentage of data classes in all the folds, the model can be trained even on minority classes

Importing the libraries necessary for our model:

As we can see, in our prediction class, the income is in words. Let us convert it into numeric form to make classification easier.

Let us do the same with the sex column. At the same time, these are a bunch of relationships and marital status which can be simply converted into married or unmarried and then converted into binary classes.

After dropping unnecessary columns, the dataset will be significantly reduced.

Splitting the dataset into training and testing data and creating our models.

Let us perform cross-validation, first using K-Fold Cross-Validation. We have taken k as 10. We can see that linear regression performs better.

Now, let’s use Stratified K-Fold and see the results.

Was this article on cross-validation useful to you? Do you have any doubts or questions for us? Mention them in this article's comments section, and we'll have our experts answer them for you at the earliest.