Lesson 32 of 42By Simplilearn 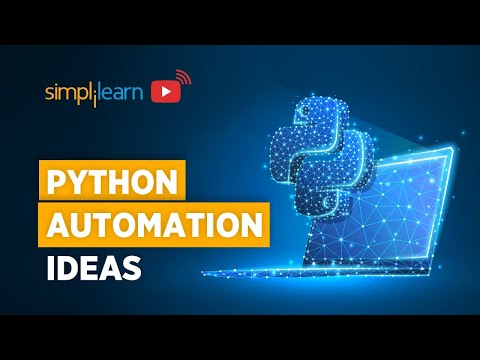 Python is an extensively used programming language in the fields of web development, game development, data analytics, and machine learning. This article on Python Automation Project Ideas will help you learn about some of the standard and exciting projects you can create using Python.

Machine Learning is a massive field of technology, both in terms of software and hardware. Its applications spread across almost every industrial and commercial area. Now Python is commonly used for implementing machine learning models and algorithms.

Some of the most popular Python libraries that are used for solving machine learning problems are :

Some of the application areas where Python automation is extensively employed are :

Web Scraping is a common technique used to extract large amounts of data from websites and web applications, and Python is the go-to language for web scraping.

The extracted data from a website is usually stored in a local file on the computer or in a database in the form of tables.

The prices of the share market and cryptocurrencies go up and down ever so often, so Python is used to track and predict the market for profitable investment.

Even though the markets are volatile, Python automation can provide a trend for a better purchase or sale.

A well-informed investment can go a long way, and that's where automated stock price trackers come in, which of course, are powered by Python.

Chatbots are usually developed using Natural Language Processing libraries like NLTK, spaCy, etc. These libraries can take hundreds of thousands of sentences and then create a new sentence as a response to a question.

Python is used for automated file management – creating, deleting, renaming, and other file operations. A handful of Python scripts can perform full-blown file management operations automatically or at a scheduled time.

Python is often used in workplaces to automate and schedule the sending/receiving of emails and texts.

Emails and texts are usually automated or scheduled, among other tasks within a team, to focus on further development tasks. This increases productivity and encourages better time management in a group.

Spreadsheets are commonly used to store large amounts of data. Going through and editing thousands of data cells in a spreadsheet can be daunting and so Python is also be used to edit spreadsheets using Python scripts.

Filling up online forms can be tiring, but what should you do when you have to fill thousands of similar forms? The best way is to write a relevant Python script for that particular form and let it fill all the forms automatically.

You need to provide data equivalent to what is required to fill up a particular form on the internet. For example, if a specific google form has fields for name, age, and gender, a Python script should be written precisely to fill those fields.

The Internet of Things is the network of physical things embedded with some software, sensors, and other technologies that help them connect to other devices on a network.

So we have now covered the 10 most popular Python Automation Project Ideas. (There are many other uses of Python as well. But these are the most trending according to the current scenario.) You may use up these ideas for your work as well as college or office projects.

Get Ahead of the Curve and Become a Python Developer Today

If you are wondering the right way to enter this prevalent tech industry, we'd suggest you enroll in a comprehensive Python Training Course. To achieve all the practical, work-ready skills, you need to become employable in the field immediately upon completion. If you are looking for additional information before enrolling in a program, check out our YouTube video that provides a quick introduction to programming or coding.

We hope this article on Python Automation Project Ideas was helpful for you. Do you have any specific questions for us? Mention them in this article's comments section, and we'll have our experts answer them for you at the earliest!