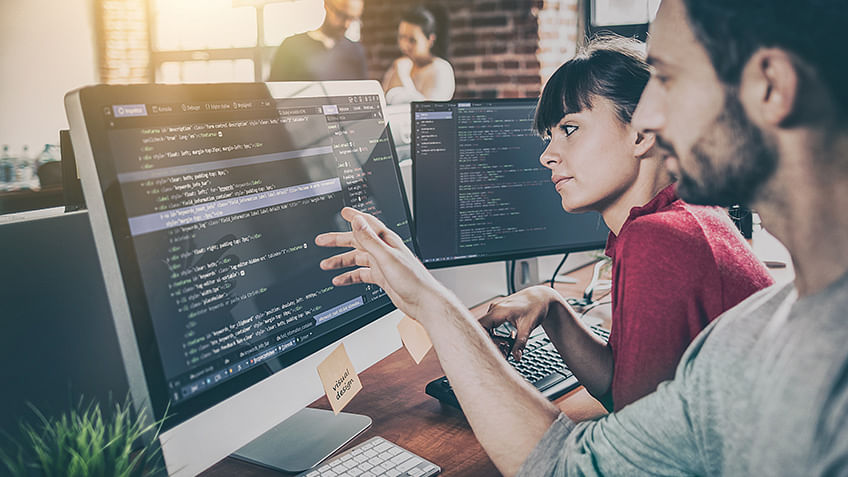 Devised back in 1989, Python wasn’t one of the programming languages until the onset of digitalization. Today, the world of Big Data and analytics has gained enormous popularity and consequently, Python has become the preferred programming language among data scientists. Scalability, simpler coding, and its collection of libraries and frameworks are just some of the features that make Python suitable for companies engaged in Big Data or machine learning-based initiatives.

Are you applying for a job that involves knowledge of Python? Here are some of the important interview questions that you may face in your Python-related interview. Dive into these Python interview questions and see just how well-versed you are in this programming language.

1. What is the Difference Between a Shallow Copy and Deep Copy?

2. How Is Multithreading Achieved in Python?

Multithreading usually implies that multiple threads are executed concurrently. The Python Global Interpreter Lock doesn't allow more than one thread to hold the Python interpreter at that particular point of time. So multithreading in python is achieved through context switching. It is quite different from multiprocessing which actually opens up multiple processes across multiple threads.

Django is a web service used to build your web pages. Its architecture is as shown:

4. What Advantage Does the Numpy Array Have over a Nested List?

Numpy is written in C so that all its complexities are backed into a simple to use a module. Lists, on the other hand, are dynamically typed. Therefore, Python must check the data type of each element every time it uses it. This makes Numpy arrays much faster than lists.

Numpy has a lot of additional functionality that list doesn’t offer; for instance, a lot of things can be automated in Numpy.

5. What are Pickling and Unpickling?

If you just created a neural network model, you can save that model to your hard drive, pickle it, and then unpickle to bring it back into another software program or to use it at a later time.

6. How is Memory managed in Python?

Python has a private heap space that stores all the objects. The Python memory manager regulates various aspects of this heap, such as sharing, caching, segmentation, and allocation. The user has no control over the heap; only the Python interpreter has access.

7. Are Arguments in Python Passed by Value or by Reference?

Arguments are passed in python by a reference. This means that any changes made within a function are reflected in the original object.

In the second example, we have created a whole new object for ‘l’. But, the values [3, 2, 3, 4] doesn’t show up in the output as it is outside the definition of the function.

8. How Would You Generate Random Numbers in Python?

To generate random numbers in Python, you must first import the random module.

The random() function generates a random float value between 0 & 1.

The randrange() function generates a random number within a given range.

In Python, the / operator performs division and returns the quotient in the float.

The // operator, on the other hand, returns the quotient in integer.

The ‘is’ operator compares the id of the two objects.

11. What Is the Purpose of the Pass Statement?

The pass statement is used when there's a syntactic but not an operational requirement. For example - The program below prints a string ignoring the spaces.

Here, the pass statement refers to ‘no action required.’

12. How Will You Check If All the Characters in a String Are Alphanumeric?

Python has an inbuilt method isalnum() which returns true if all characters in the string are alphanumeric.

Another way is to use regex as shown.

13. How Will You Merge Elements in a Sequence?

There are three types of sequences in Python:

14. How Would You Remove All Leading Whitespace in a String?

Python provides the inbuilt function lstrip() to remove all leading spaces from a string.

15. How Would You Replace All Occurrences of a Substring with a New String?

The replace() function can be used with strings for replacing a substring with a given string. Syntax:

replace() returns a new string without modifying the original string.

Output: “Hey John. How are you, John?

16. What Is the Difference Between Del and Remove() on Lists?

Here is an example to understand the two statements -

17. How Do You Display the Contents of a Text File in Reverse Order?

You can display the contents of a text file in reverse order using the following steps:

18. Differentiate Between append() and extend().

19. What Is the Output of the below Code? Justify Your Answer.

Note that list1 and list3 are equal. When we passed the information to the addToList, we did it without a second value. If we don't have an empty list as the second value, it will start off with an empty list, which we then append. For list2, we appended the value to an empty list, so its value becomes [123].

Remember that a default list is created only once during the function and not during its call number.

20. What Is the Difference Between a List and a Tuple?

Lists are mutable while tuples are immutable.

the object does not support item

There is an error because you can't change the tuple 1 2 3 into 1 2 4. You have to completely reassign tuple to a new value.

21. What Is Docstring in Python?

22. How Do You Use Print() Without the Newline?

The solution to this depends on the Python version you are using.

23. How Do You Use the Split() Function in Python?

The split() function splits a string into a number of strings based on a specific delimiter.

the delimiter is the character based on which the string is split. By default it is space.

max is the maximum number of splits

Here, we have a variable var whose values are to be split with commas. Note that ‘2’ indicates that only the first two values will be split.

24. Is Python Object-oriented or Functional Programming?

Python is considered a multi-paradigm language.

25. Write a Function Prototype That Takes a Variable Number of Arguments.

The function prototype is as follows:

In the above code, * indicates that there are multiple arguments of a variable.

27. “in Python, Functions Are First-class Objects.” What Do You Infer from This?

A numpy array is a grid of values, all of the same type, and is indexed by a tuple of non-negative integers. The number of dimensions determines the rank of the array. The shape of an array is a tuple of integers giving the size of the array along each dimension.

30. What Is the Difference Between Matrices and Arrays?

31. How Do You Get Indices of N Maximum Values in a Numpy Array?

Here, options a and b would both do horizontal stacking, but we want vertical stacking. So, option c is the right statement.

33. How Would You Import a Decision Tree Classifier in Sklearn? Choose the Correct Option.

34. You Have Uploaded the Dataset in Csv Format on Google Spreadsheet and Shared It Publicly. How Can You Access This in Python?

We can use the following code:

35. What Is the Difference Between the Two Data Series given Below?

Answer - 3. Both are copies of the original dataframe.

Want to get skilled in working with Python classes and files? Then check out the Python Training Course. Click to enroll now!

36. You Get the Error “temp.Csv” While Trying to Read a File Using Pandas. Which of the Following Could Correct It?

The error relates to the difference between utf-8 coding and a Unicode.

37. How Do You Set a Line Width in the Plot given Below?

38. How Would You Reset the Index of a Dataframe to a given List? Choose the Correct Option.

39. How Can You Copy Objects in Python?

The function used to copy objects in Python are:

copy.copy for shallow copy and

40. What Is the Difference Between range() and xrange() Functions in Python?

41. How Can You Check Whether a Pandas Dataframe Is Empty or Not?

The attribute df.empty is used to check whether a pandas data frame is empty or not.

The code is as shown below:

43. How Do You Create a Series from a List, Numpy Array, and Dictionary?

44. How Do You Get the Items Not Common to Both Series a and Series B?

45. How Do You Keep Only the Top Two Most Frequent Values as It Is and Replace Everything Else as ‘other’ in a Series?

46. How Do You Find the Positions of Numbers That Are Multiples of Three from a Series?

47. How Do You Compute the Euclidean Distance Between Two Series?

You can see that the Euclidean distance can be calculated using two ways.

48. How Do You Reverse the Rows of a Data Frame?

49. If You Split Your Data into Train/Test Splits, Is It Possible to over Fit Your Model?

Yes. One common beginner mistake is re-tuning a model or training new models with different parameters after seeing its performance on the test set.

50. Which Python Library Is Built on Top of Matplotlib and Pandas to Ease Data Plotting?

Seaborn is a Python library built on top of matplotlib and pandas to ease data plotting. It is a data visualization library in Python that provides a high-level interface for drawing statistical informative graphs.

Did you know the answers to these Python interview questions? If not, here is what you can do.

Cracking a job interview requires careful preparation apart from the right blend of skills and knowledge. There are a number of emerging job opportunities that demand proficiency in Python. As recruiters hunt for professionals with relevant skills, you need to ensure that you have a thorough knowledge of Python fundamentals and the ability to answer all the Python interview questions. You can enroll in Simplilearn’s Data Science with Python course to gain expertise in this language and become a potential candidate for your next job interview.