HomeResourcesSoftware DevelopmentPython Tutorial for BeginnersWhat Is Python RPA: Benefits, and How to Write Python Script Command in RPA

What Is Python RPA: Benefits, and How to Write Python Script Command in RPA

Lesson 34 of 43By Simplilearn 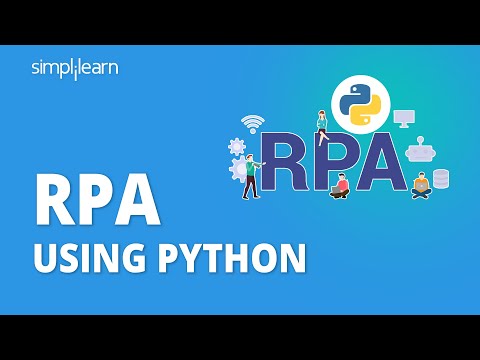 There are multiple tools for Robotic Process Automation (RPA) that are currently available in the market. Simultaneously, there have been numerous instances of automation attempts failing, making firms hesitant. Processes aren't standardized, which is the main issue. That's where a Python automation project may be a game-changer because Python automation delivers the much-needed flexibility required in the real world.

Why is Python Essential for RPA?

Most RPA platforms include drag-and-drop functionality, but customization is limited. Even when developers can modify the robots, they are unable to maintain stability and often fall apart. Python may be used to create custom robots that do exactly what you want them to do. You can define them using a Python-based simplified command language. When necessary, you can enhance the robots using Python libraries.

Python's demand in RPA is growing as more Python-skilled employees become accessible and there are increasing possibilities that Python provides when combined with RPA. Cognitive RPA is the next step in the evolution of RPA, which allows it to work alongside artificial intelligence. To apply artificial intelligence, machine learning and programming abilities are required to create models that can do natural language learning. This activity requires Python skills.

Most RPA tools demand some programming skills for advanced operations, complex analyses, and activities, such as acquiring data through a site scrape and then altering this data to exactly how you'd like to utilize it. Because the data may be in a raw state, it requires extra processing and analysis, to bring it to a useful state. This is where computer languages like Python come in handy, as it can take advantage of the numerous libraries available to perform the hard labor of data manipulation.

Is RPA Based on Python?

One of the numerous advantages of a Python-based RPA system is its adaptability. Although most of today's leading RPA systems provide powerful solutions, they do so at a cost.

These RPA license rentals are simply too expensive, making scaling RPA in any firm, regardless of size, the most challenging task. When it comes to RPA, Python has a zero license cost.

RPA cannot run multiple processes simultaneously, on the same machine, and with the same user. However, when RPA is done in Python, each bot represents a single automated activity, task, or process. At the same time, you can scrape many websites. You can automate multiple web applications at the same time if they enable it.

RPA uses software with Artificial Intelligence (AI) and Machine Learning (ML) capabilities to handle high-volume, repeated tasks. Python is the most commonly used language for AI and ML. You'll find several inbuilt or third-party AI packages in any RPA software that are used to incorporate intelligence into their bots. And these bundles aren't free. However, with Python-based intelligent RPA solutions, the expenses, and complexities associated with these many AI/ML layers significantly reduce, allowing adequate space and flexibility for a seamless RPA + AI/ML experience at a fraction of the cost.

How to Invoke Python Script in UiPath?

Step 2: In the workflow designer, drag and drop a Python scope activity.

Step 3: In the path attribute of the Python scope activity, specify the Python installation directory.

Step 4: Drag and drop a load Python script activity into the Python scope's Do section, and in the Code property, enter the Python code.

Step 5: Create a new PythonObject variable as script and place it in the result property field.

Step 6: Drag and drop an activity called the Invoke Python Method and set its attributes.

Enter these parameters for input:

Instance - Fill in this field with the variable script you defined before in step5.

Name - In the script you want to use, add the name of the technique you wish to use in this example name.

Step 7: Create a new Python object variable called script1 and add it to this property field as a result.

Step 8: Drag a get Python object activity into the pipeline after that. Configure the following properties:

Add the Script1 variable to this field as a Python object.

Create a new variable named script2 and place it in the result field.

Step 9: At the end of the project, add a message box activity and set it to display the result variable.

Step 1: Log in to the automation anywhere control room and create a new bot. In this example, you must name the bot as a Python bot.

Step 2: Navigate to the Python script package, drag and drop the open action.

Select the manual input option and enter the code.

Step 3: Drag and drop the execute function and fill its attributes as follows:

For this example, enter “name”.

The argument to the function: Create a new variable python_var, select the type as a string and enter the default value.

Step 4: Drag and drop a message box to display the variable. Select the previously created variable in the message to be displayed option.

Step 5: Drag and drop the close action from the Python script package.

Note that the session name should be the same as specified in the open action.

Many surveys and reports reveal that Python’s popularity will continue to rise in the years ahead.

Artificial intelligence and machine learning in RPA will continue to spread across several industries, bringing Python with it. Overall, Python enables automation solutions to achieve the optimal blend of user-friendliness, flexible programming, and an open-source community, making it suitable for robotic process automation.

This tutorial on ‘RPA Using Python’ covers the importance of python in RPA. Apart from RPA using Python, it also includes the stepwise tutorial to invoke python scripts in UiPath and Automation Anywhere.

Simplilearn’s Introduction to RPA will help you expand your expertise in advanced intelligent applications, and this course will put you on the fast track. RPA is one of the fastest-growing technologies for improving real-time business processes and operations. This course will give you an overview of RPA concepts and help you understand RPA using python. The value-add brings relevant business use cases and tools understanding.

Let us know if you have any feedback or questions on RPA using Python, in the comments below, and one of our experts will respond as soon as possible.