HomeResourcesSoftware DevelopmentSQL Tutorial for BeginnersWhat is Normalization in SQL? 1NF, 2NF, 3NF and BCNF in DBMS

What is Normalization in SQL? 1NF, 2NF, 3NF and BCNF in DBMS

Lesson 6 of 6By Simplilearn 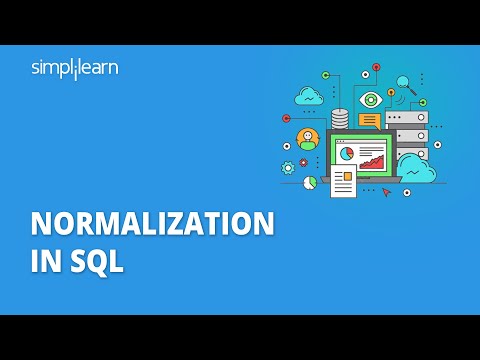 As an SQL Developer, you often work with enormous amounts of data stored in different tables that are present inside multiple databases. It often becomes strenuous to extract the data if it is not organized correctly. Using Normalization, you can solve the problem of data redundancy and organize the data using different forms. This tutorial will help you get to know the concept of Normalization in SQL.

In this tutorial, you will learn the following topics:

What Is Normalization in SQL?

Normalization is the process to eliminate data redundancy and enhance data integrity in the table. Normalization also helps to organize the data in the database. It is a multi-step process that sets the data into tabular form and removes the duplicated data from the relational tables.

Normalization organizes the columns and tables of a database to ensure that database integrity constraints properly execute their dependencies. It is a systematic technique of decomposing tables to eliminate data redundancy (repetition) and undesirable characteristics like Insertion, Update, and Deletion anomalies.

Now let's understand the types of Normal forms with the help of examples.

Now you will understand the First Normal Form with the help of an example.

Below is a students’ record table that has information about student roll number, student name, student course, and age of the student.

By applying the First Normal Form, you achieve atomicity, and also every column has unique values.

Before proceeding with the Second Normal Form, get familiar with Candidate Key and Super Key.

A candidate key is a set of one or more columns that can identify a record uniquely in a table, and YOU can use each candidate key as a Primary Key.

Now, let’s use an example to understand this better.

Super key is a set of over one key that can identify a record uniquely in a table, and the Primary Key is a subset of Super Key.

Now understand the Second Normal Form with the help of an example.

The Location table possesses a composite primary key cust_id, storeid. The non-key attribute is store_location. In this case, store_location only depends on storeid, which is a part of the primary key. Hence, this table does not fulfill the second normal form.

To bring the table to Second Normal Form, you need to split the table into two parts. This will give you the below tables:

As you have removed the partial functional dependency from the location table, the column store_location entirely depends on the primary key of that table, storeid.

Now that you understood the 1st and 2nd Normal forms, you will look at the next part of this Normalization in SQL tutorial.

Below is a student table that has student id, student name, subject id, subject name, and address of the student as its columns.

Now to change the table to the third normal form, you need to divide the table as shown below:

As you can see in both the tables, all the non-key attributes are now fully functional, dependent only on the primary key. In the first table, columns name, subid, and addresses only depend on stu_id. In the second table, the sub only depends on subid.

Boyce Codd Normal Form is also known as 3.5 NF. It is the superior version of 3NF and was developed by Raymond F. Boyce and Edgar F. Codd to tackle certain types of anomalies which were not resolved with 3NF.

The first condition for the table to be in Boyce Codd Normal Form is that the table should be in the third normal form. Secondly, every Right-Hand Side (RHS) attribute of the functional dependencies should depend on the super key of that particular table.

Consider the below subject table:

The subject table follows these conditions:

Another important point to be noted here is that one professor teaches only one subject, but one subject may have two professors.

Which exhibit there is a dependency between subject and professor, i.e. subject depends on the professor's name.

The table is in 1st Normal form as all the column names are unique, all values are atomic, and all the values stored in a particular column are of the same domain.

The table also satisfies the 2nd Normal Form, as there is no Partial Dependency.

And, there is no Transitive Dependency; hence, the table also satisfies the 3rd Normal Form.

This table follows all the Normal forms except the Boyce Codd Normal Form.

As you can see stuid, and subject forms the primary key, which means the subject attribute is a prime attribute.

However, there exists yet another dependency - professor → subject.

And in the second table will have the columns profid, subject, and professor, which satisfies the BCNF.

With this, you have reached the conclusion of the ‘Normalization in SQL’ tutorial.

If you have any questions or inputs for our editorial team regarding this “The Supreme Guide to Normalization in SQL” tutorial, do share them in the comments section below. Our team will review them and help solve them for you very soon!