What is ANOVA? Understanding the Fundamentals of ANOVA

Lesson 20 of 22By Simplilearn 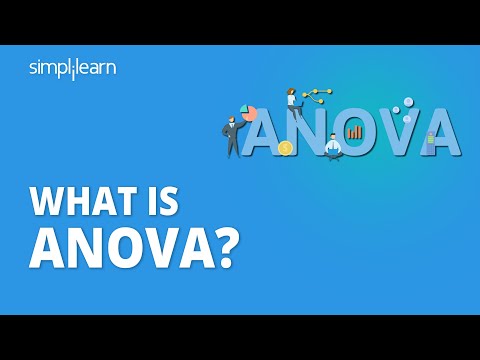 Data collection, organization, analysis, interpretation, and presentation are all part of statistics, a branch of mathematics. As an interdisciplinary field, statistics have several concepts that have found practical applications. Analysis of Variance, also known as ANOVA, is one such concept that will be discussed in this article.

What Is Analysis of Variance (ANOVA)?

Now that we have understood what ANOVA is, let’s understand some important terms related to ANOVA.

F-statistic or F-ratio is a statistical measure that tells us about the extent of difference between the means of different samples. Lower the F-ratio, closer are the sample means.

The sum of squares is a technique used in regression analysis to determine the dispersion of data points. It is used in the ANOVA test to compute the value of F.

The Mean Squared Error gives us the average error in the data set.

In ANOVA, we have Null Hypothesis and an Alternative Hypothesis. The Null hypothesis is valid when all the sample means are equal, or they don’t have any major difference.

The Alternate Hypothesis is valid when at least one of the sample means is different from the other.

In ANOVA, a group is a set of samples within the independent variable.

The most common method of performing an ANOVA test is one-way ANOVA. The one-way ANOVA means that the analysis of variance has one independent variable.

Now that you know the basic concepts of ANOVA, let’s see how you can perform One-way ANOVA in Excel

In Excel, to start analyzing the data, you have to activate the add-in named Data Analysis Toolpak.

Here are the steps to turn on the Excel add-in:

Step 3: Next to Manage, select Excel Add-ins, then click Go.

Step 4: In the Add-ins window, select Analysis Toolpak, and then click Go.

Example of One-Way ANOVA in Excel

Suppose you are a research scientist and you want to perform clinical trials to study the effectiveness of three drugs developed by three healthcare companies to cure a certain disease.

The data below represents the time taken to cure the disease for different patients when they consume either Drug A, B, or C. The time is represented in terms of total hours and minutes.

At the 0.05 level of significance (alpha value), we need to test whether the mean time for the three drugs to cure the disease are equal (H0).

3. In the Input Range, enter the range of cells containing the data. Click OK.

You have your ANOVA table ready.

Summary of the ANOVA

It is recommended that you take a variety of problem statements and solve them using Analysis of Variance and the techniques discussed in this tutorial.

Simplilearn also offers a comprehensive course on Data Science and Analytics which prepares you for all kinds of Data Science roles.

If you have any questions or queries relating to this tutorial ‘What is ANOVA’, do share them in the comment section. Our subject matter experts will acknowledge and respond to your queries. Happy learning!