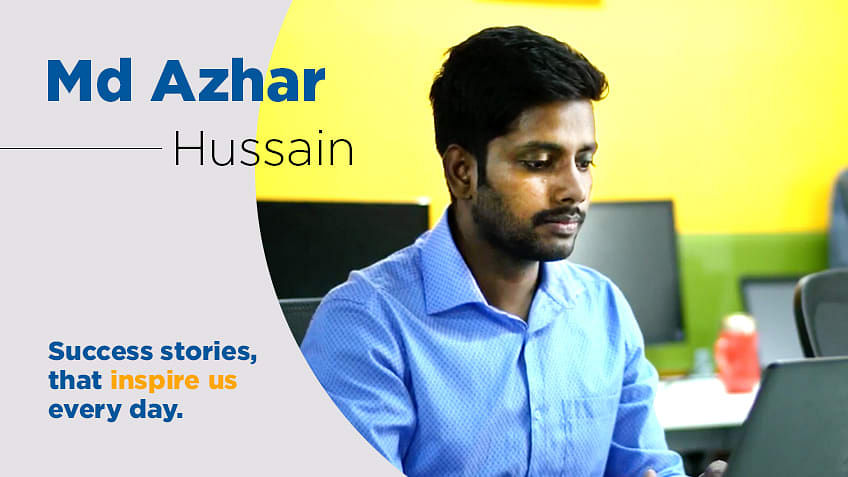 Simply being good at your job doesn’t always cut it, especially if you don’t feel adequately challenged. Md Azhar Hussain realized this early in his career, working as a PDC (primary domain controller) tester at Capgemini after earning his bachelor’s degree in computer science. The job left him unfulfilled; but as he looked around at some of the cutting edge technologies Capgemini was embracing, he began to envision a different career path.

“I was working in testing and felt that the role was stagnating,” Azhar explained. “I was not seeing a bright future in testing.”

He realized his future was in big data, but he needed additional training to get there. Word-of-mouth recommendations and the desire for flexibility led him to Simplilearn, where he completed the Big Data Hadoop and Spark Developer course. Azhar is now fully engaged as a big data developer with Capgemini. This is his story.

The Challenge: Finding His True Calling

Your first job out of college isn’t always perfectly aligned with your long-term goals, but Azhar was lucky to have an employer that supported his ambitions. Not long after starting his job as a tester with Capgemini, he came to the realization that there wasn’t much of a future in that career path. Besides, he just wasn’t energized or inspired by the work he was doing. Only a year out from getting his undergrad degree, he already felt his career stagnating.

Azhar could have coasted along in his uninspiring role, putting in the time and then moving on to another employer. But both he and his employer valued their relationship; they knew they could do more together. Because of Azhar’s self-awareness and Capgemini’s willingness to support Azhar’s career growth, they would embark on a transition beneficial for both parties.

“I was not interested in testing,” he said, with the utmost clarity. “I wanted to move into the field of big data.”

Likewise, Azhar’s employer didn’t want to lose such a bright and ambitious young man. By investing in his future, they would invest in their continuing success as well.

Azhar envisioned himself as a big data architect and knew the particularly complex field required additional training and certification. Since big data architects serve as important conduits between business and technology—essentially, using data to make smarter business decisions—they require a great deal of knowledge and competency in both worlds. This is why they’re so highly valued (and well-compensated!).

A friend told Azhar about Simplilearn, which he decided was a great fit after comparing it to other training options and then meeting with a sales executive at Simplilearn’s Bangalore office. With support from his employer, Azhar and five of his colleagues signed up for the Big Data Hadoop and Spark Developer course.

Although he appreciated the option to switch trainers if they didn’t suit his learning style, he found them to be much better than expected. In addition to the necessary technical and theoretical instruction, he said they provided several practical demonstrations that he was able to implement at his workplace. He also did some of the training sessions at work, with support from his employer.

Azhar received a Simplilearn certificate upon completion of the course, which he could then add to his resume and LinkedIn profile. Armed with the ability to apply this cutting edge—and in-demand—technology in a workplace setting, he was ready to realize the bright future he always envisioned.

He was ready to leave his job as a tester behind and asked his manager for a transition into the field of big data. Of course, Capgemini already knew they wanted to hold onto Azhar. But since they wanted to be absolutely sure it would be the right fit, they put him through three rounds of interviews before promoting him to the role of Big Data Developer.

Azhar credits the high-quality Blended Learning approach of Simplilearn (combining instructor-led training with self-paced lessons) with his success. In fact, he appreciates having lifetime access to course videos and refers to them from time to time when he needs a refresher.

Take it from Azhar, there’s no reason to stagnate in a career that doesn’t motivate you, especially when quality training options can help chart the path to a bright future. Check out Simplilearn’s many big data offerings, including our comprehensive Big Data Engineer Master’s Program.