HomeResourcesIT Service and ArchitectureStudent Spotlight: Rajen Ghosh Advances His IT Career With Simplilearn

Azure DevOps: The Next Big Thing in Application Lifecycle Management

Student Spotlight: Rajen Ghosh Advances His IT Career With Simplilearn 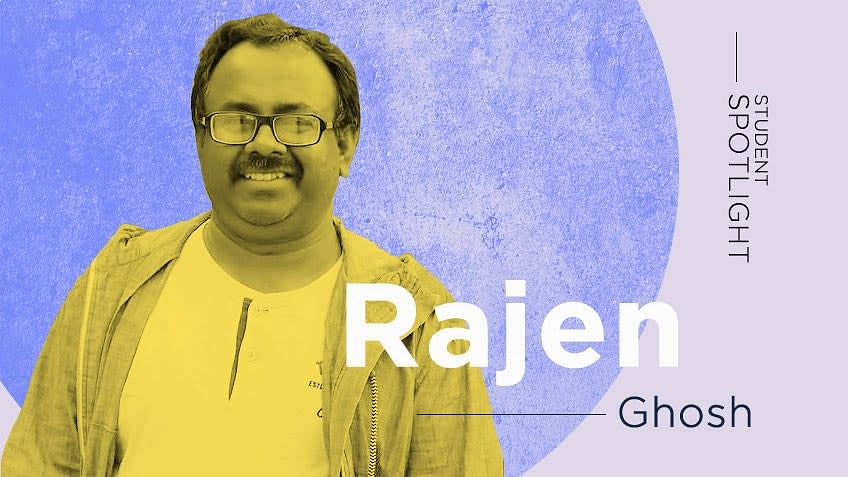 Employees today are in a unique position to be much more proactive about their careers in comparison to the recent past. In fact, lack of opportunity for advancement is the number one reason employees leave jobs. Employees no longer believe they are “stuck” at a job. If they aren’t moving up the career ladder where they are currently employed, they will seek employment elsewhere. And moving up the career ladder means professionals need to be lifelong students. We need to keep learning and keep ourselves up-to-date with all the latest trends in the industries we’re in.

That’s exactly what Rajen Ghosh has done. He has worked in technology since the start of his career, and from the very beginning he sought out ways to learn and be more valuable to his employers. In pursuit of this goal, he has earned certifications in computer hardware maintenance and operation while working with several companies on deskside support and networking. He has completed his CCNA, MCSE, RHCSA, RHCE, and Lean Sigma certifications. Most recently, Rajen completed the ITIL Lifecycle Expert program with Simplilearn.

Rajen was previously working as a technical support engineer with a team of 16 people under him. His responsibilities included providing day-to-day support for software, troubleshooting problems pertaining to system performance, network administration, and developing and implementing new repair techniques.

He decided to pursue the ITIL Expert program because working in IT services meant he needed to both stay current as well as learn new skills to get ahead.

As he completed the program, his team got dissolved, but he was retained because he had completed the ITIL certification. Rajen was moved to the network department and later promoted to the position of Network Senior Manager.

He now handles a team of more than 40 people. His responsibilities include overseeing troubleshooting, system backups, archiving, serving as a single point of contact for supporting customers (North America, EMEA) and stakeholders, and drafting the roles and responsibilities of subject matter experts (SMEs) and team members to drive the best results in terms of service delivery.

Rajen thinks the skills that he learned with Simplilearn have helped him make this transition. He had always wanted to move into a leadership role and believes the training he received helped to prepare him for the new position.

Rajen first heard about Simplilearn from a friend. When he looked into it, he learned Simplilearn is one of the world’s largest training providers, offering excellent customer service and a high-quality course curriculum that covered all aspects of the type of training he wanted.

The online self-learning path worked well for Rajen. He completed the course in six months, studying for three hours during the weekends and 30 minutes to an hour during the weekdays. “Simplilearn is a place where you can take up your training at your own pace and away from the hustle and bustle of your day job,” he says. With Simplilearn, “...you can simply access the course curriculum and continue with your learning when you have spare time.”

Rajen set out to learn the basic tenets of ITIL through his Simplilearn coursework. These new skills “…help me in my day-to-day job,” he says. “I’ve learned how to do a deep dive analysis and play around with the data. There are so many things available in ITIL and sometimes, without proper training, we would never be able to use all the tools and resources available.”

Service Operations has helped Rajen improve his analysis skills and taught him about the importance of having a right balance between a proactive and a reactive approach to a situation. In addition, the course gave him an understanding of KPI metrics. He also learned project management techniques that have helped him as a manager leading a team. He already had an overview of the ITIL framework prior to the program, but the training helped him gain in-depth knowledge.

Rajen says the course was well-structured and easy to understand. As a non-native English speaker, he appreciated the neutral accent of the instructor, because it made it easier for him to comprehend the material. He has plenty of other positive things to say about the instructor too. “The instructor was great and always delivered training in the easiest possible way with plenty of examples and diagrams, plus pointers which eventually contributed to my success. I was able to apply the concepts I learned in my day-to-day work and internal job interviews,” he says.

Rajen also liked the fact that the training videos could be downloaded for future viewing. This meant he could always revisit a topic when he thought he needed a better understanding of certain concepts. He says this is a great feature that will help learners in their preparation process.

He also appreciated the customer support. “Simplilearn customer service is very agile and quick to respond to any of your queries,” he says. “They set an example for others.”

Rajen Plans to Keep on Learning to Advance His Career

Would Rajen recommend Simplilearn to a friend? Most assuredly yes, he says. He has in fact already done so and has watched a friend excel in his career due to the skills learned through Simplilearn.

Rajen is going to keep on learning as well. “I have plans to take up more training with Simplilearn from time to time,” he says because he understands how it helps him pursue his goals.

“It is, of course, for oneself to decide how one is going to take responsibility for one’s learning for getting ahead in his or her own career,” says Rajen. He is of the opinion that learning should never end and that we should all be lifelong learners. He doesn’t plan on ending his upward career trajectory either and will continue to add on to his skillset as he learns and grows—and moves up that career ladder.

Ronita is a food and social media enthusiast who is in personal touch with hundreds of food influencers around the world. She loves to travel to less known destinations to recharge herself. This section provides access to all the insightful resources that Ronita, Content Manager at Simplilearn, has contributed to our audience.