By SimplilearnLast updated on Aug 3, 2022 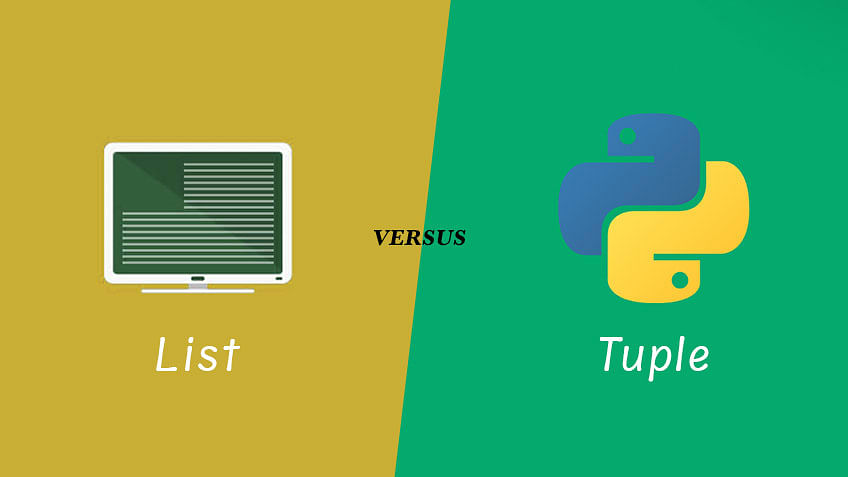 Both lists and tuples are used for storing objects in python. They seem similar, but there are specific differences in their use case. Objects that are stored in lists and tuples can be of any type.

This article will explain the difference between list and tuple in python. By the end of this article, you will be adept in syntax difference, available operations, and scenarios of using lists and tuples in python.

Lists are one of the most flexible and powerful containers in Python. It is similar to an array in other languages like Java.

Lists help store multiple items and then iterate over them using a loop. Because lists are dynamic, you can easily add or remove items anytime.

What Is a Tuple in Python?

It comes in handy when storing a collection of items, especially if you want those items to be unchanging.

A python tuple has the following features -

As tuples are immutable, they are faster than the list because they are static.

Here’s an example of declaring a list in python.

A list can contain data of different data types. You can initiate it as follows -

A tuple is initiated with the () symbol.

Here’s an example of declaring a tuple in python.

A list can contain data of different data types. You can initiate it as follows -

List and tuple act as containers for storing objects. But there is a difference in its use cases and syntax as well.

We can use the type function to check the data type of any object.

Difference Between List and Tuple in Python (An In-Depth Explanation)

The contents of a tuple cannot change once they have been created in Python due to the immutability of tuples.

There is no way to keep changing tuples. Error message if you attempt to change one of the items:

If you're familiar with lists and maps, you know that they can be modified. You can add or remove items or reassign them to different variables. But tuples? Well, you can't do any of that.

The reason is simple: tuples are immutable, meaning you cannot change their contents after they are created. The length of tuples is also fixed. They remain the same length throughout the lifecycle of the program.

We have heard already that tuples are immutable while lists are mutable. It simply means that you can change the existing values in a list. But you cannot change the same value if it is stored in the tuple.

Let’s take an example to understand the immutability of tuples

Create a new list list_num and initialize it with 5 values.

Carrying out similar operation in tuple.

Create a new tuple tuple_num and initialize it with five values.

It will the following error -

The error makes it clear that item assignment is not supported in the tuple. Hence it is immutable.

As the list is mutable, it has many inbuilt operations that you can use for achieving varied results. Let’s take a look at such list operations.

It is used to add elements to the list. The elements get added at the end of the list. You can add only one element at once. Using a loop will let you add multiple elements at once.

Using a loop for insertion

It allows you to add a new element in the list in a given position. Unlike append, it does not add elements at the end. It takes two arguments, the first argument is the position, and the second argument is the element. You can insert one element at once. Hence for inserting multiple elements, you can use a loop.

It is used to remove an element from the list. If there are multiple elements, only the first occurrence of the element is removed.

It is used to remove elements from any position in the list. Pop() takes one argument, the position of the element.

It is used to print a subset of the list. You have to specify starting position and ending position for the slicing operation.

print(numList[2:])  # prints from start index to end of list

It returns the minimum value in the list. You can use min operation successfully only if the list is homogenous.

It returns the maximum value in the list. You can use min operation successfully only if the list is homogenous.

Count operation returns the count of specified element in the list. It takes the element as an argument.

It is used to sort the list in ascending order. You can perform this operation only on a homogeneous list. Using sort() on a heterogeneous list will throw an error.

It clears all the elements from the list and empties it.

Immutability reduces the number of inbuilt functions a tuple has. Let’s take a look at such tuple operations.

It returns the minimum value in the tuple. You can use the min operation successfully only if the tuple is homogenous.

It returns the maximum value in the tuple. You can use min operation successfully only if the tuple is homogenous.

It is used to print a subset of the tuple. You have to specify starting position and ending position for the slicing operation.

print(myTuple[2:])  # prints from start index to end of tuple

print(myTuple[:])   # prints from beginning to end of tuple

It returns the length of the tuple

Tuples are immutable, but we can remove the tuple elements using del operation.

If you want to check whether an element belongs to the tuple or not, you can use a keyword to check its membership.

There is a difference in lengths between the two data structures. The length of a tuple is fixed, whereas the length of a list is variable. Therefore, lists can have a different sizes, but tuples cannot.

Tuples are allocated large blocks of memory with lower overhead than lists because they are immutable; whereas for lists, small memory blocks are allocated. Thus, tuples tend to be faster than lists when there are a large number of elements.

Python's lists are best suited to store data in the following situations:

Python's tuples are best suited to store data in the following situations:

As tuples are hashable, you can use them as keys for dictionaries.

When to Use Tuples Over Lists?

Tuples are immutable. Hence they are primarily used to store data that doesn't change frequently. Any operation can store data in a tuple when you don't want it to change.

Tuples are great to use if you want the data in your collection to be read-only, never to change, and always remain the same and constant.

Because of this ability and the guarantee that data is never changed, you can use tuples in dictionaries and sets, which require the elements inside them to be of an immutable type.

It is beneficial when you need to store values that don't change over time, like a person's birthdate or height.

Now that you have an in-depth understanding of List and Tuples in Python, take a deep dive into more Python concepts with Simplilearn’s Python Certification Course. This course covers the basics of Python, data operations, conditional statements, shell scripting, and Django. Get certified in Python and boost your career today!