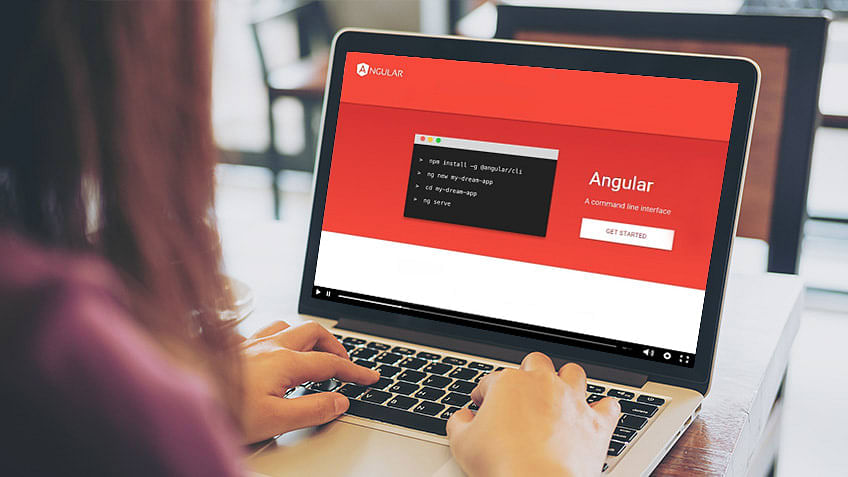 ➤ In the current work space, there are various frameworks and libraries designed to provide alternative solutions. And when it comes to front-end web development, Angular addresses most of the issues developers face when using JavaScript on its own.

➤ Angular is an open-source, JavaScript framework written in TypeScript, with clear advantages and a standard structure for developers on a team to work with.

Angular is an open-source framework used for creating dynamic and modern web applications. Here are some of the most common applications of Angular that you will learn in this Angular tutorial.

Angular uses HTML to define the UI of an application. As HTML is a declarative language, you do not have to define the flows of the program. You can simply define what you require and Angular will take care of it.

Testing is extremely simple in Angular. The modules have their own application parts, which enable you to perform automated testing. It follows one file, one module principle where you don’t even need to remember the module loading order.

Here are the topics covered in the Angular tutorial:

Angular is a JavaScript framework written in TypeScript and maintained by Google. It enables users to develop and test large applications easily. It has surpassed Javascript for developing single-page applications that require modularity, testability, and developer productivity. In this Angular tutorial, you will learn about the different features of Angular, Angular Architecture, its advantages, and its limitations.

2. What are Angular Forms and How to Implement Them?

Angular Forms are an integral part of a web application. They enable you to log in, update profiles, enter sensitive information, and perform a number of data entry tasks. In this Angular tutorial, you will learn about how to create an Angular form, the different types of Angular forms, form controls, form groups and a demo on how to create Angular forms and implement them.

There are many applications  today developed using Angular. In this Angular tutorial, you will learn about the prerequisites for using Angular and also create your first HelloWorld App using Angular.

Data binding in Angular defines the communication between components and views. It consists of two types (one-way and two-way data binding) which enables you to exchange data from DOM to component and vice-versa. In this Angular tutorial, you will learn about Angular data binding and its different types.

6. What is Bootstrap and How to Embed Bootstrap into Angular?

Bootstrap is a powerful toolkit used for creating and building responsive web pages and web applications. It is a free and open-source project created by Twitter and hosted on GitHub. In this Angular tutorial, you will learn about the step-by-step procedure to embed Bootstrap into your Angular application and create an interactive Webpage.

7. Introduction To Angular Service and its Features

8. A Complete Guide To Angular Routing

Angular routing is an important part of Angular that is used to create Single Page Applications (SPAs). These applications are loaded just once and new content is added dynamically. SPAs provide an excellent user experience and you don’t have to wait for pages to load, and by extension, this makes the SPA fast and gives a desktop-like feel. It generally specifies navigation with a forward slash followed by the path defining the new content. In this Angular tutorial, you will learn about Angular routing and how to navigate to the login page of a web application.

9. How To Implement Angular Dependency Injection

The increased popularity of Angular has resulted in a high demand for Angular developers.  In this Angular tutorial, you will learn about the most common Angular interview questions. The questions have been split into two levels (beginner and advanced) to make the process easier for you to learn.

This Angular tutorial covers all the fundamentals aspects of Angular, including multiple demos to create various Angular forms, components and services. If you are looking to learn about each of these topics and more in detail, you can also enroll in Simplilearn's Angular Certification Training course which is designed to help you master front-end web development with Angular. You will also gain in-depth knowledge of concepts like facilitating the development of single-page web applications, dependency injection, typescript, components, and directives with this Angular Course. Get started with this course today to accelerate your career in web development.