6 Factors that could demotivate you before your PMP certification exam 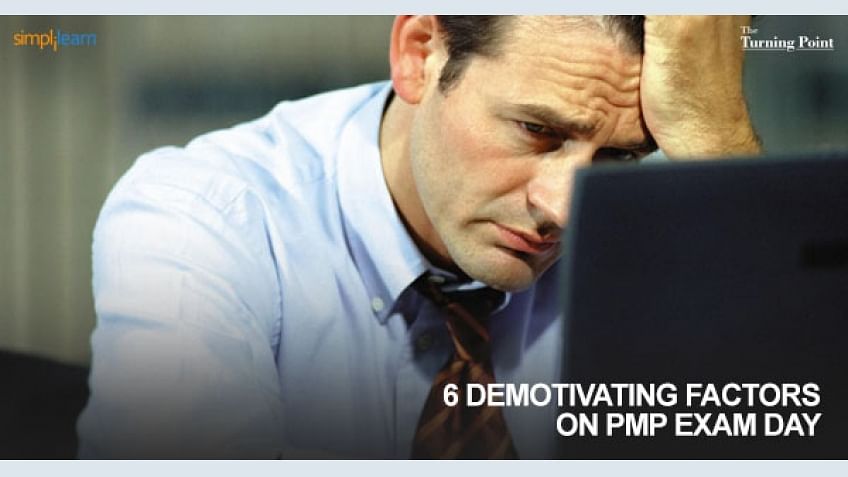 One very important aspect of motivation is the willingness to stop and to look at things that no one else has bothered to look at. This simple process of focusing on things that are normally taken for granted is a powerful source of creativity. - Edward de Bono

The PMP® certification is a tough exam, which tests your knowledge and your ability to apply them in various scenarios. Motivation plays an important role in helping you to stay focused before the exam. However, aspirants face several professional and personal challenges which could be serious demotivating factors while studying for the exam. One way of dealing with these challenges is to understand all those factors that demotivate you and come up with solutions for dealing with them. In this article therefore, we will take a look at some of the factors that could demotivate you before the exam. We will also take a look at some of the effective ways in dealing with these challenges.

One way of dealing with this problem, is to set realistic goals and study plans; and consistently achieve them. You could use authentic prep books by Rita Mulcahy and Andy Crowe to create a realistic study plan for yourself.

Also, you could avoid spending too much time on a particular problem or concept to deal with this challenge.

Fear of failures has haunted even some of the most successful people in the world. This could be a serious demotivating factor before the PMP® certification exam as well. There could be several factors that could instill fear of failures within you. For instance you may be scared when you know that many who take up the PMP® exam do not pass.

Fear indicates that we need to take action. Therefore, aspirants need to have a study plan, put in their 100% efforts while preparing for the exam, and take up as many mock tests as possible to deal with fear of failures. Planning, preparation and practice is the mantra for success in this exam.

3. Not knowing how and what to study

I remember the day when I first started preparing for the PMP® certification exam. I was quite overwhelmed by what I had to study in the stipulated time frame, including the 42 processes, 9 knowledge areas and several important concepts in each of these knowledge areas. This was also a serious demotivating factor in the initial stages of my preparation for the exam.

What really helped me later was a study plan in which I had carefully planned what I had to study and how I would study for the exam.

You could refer to a good prep book by experts such as Andy Crowe and Rita Mulcahy to know what and how to study for the exam.  For instance, prep books such as Andy Crowe, takes us through some foundational concepts and terms; before digging deeper into the knowledge areas and processes .This helps a PMP® aspirant in cementing his understanding of those terms and concepts, and also helps him to understand the working of the processes, in a better manner.

4. Scoring less in the mock tests

A low score in the mock tests could be one of the serious demotivating factors while studying for the PMP® exam.

However , you could practice as many mock tests as possible from several resources  to be familiar with different types of questions on the exam .This could even be in the sets of 10 , 20 , 50 , or even 100 questions . This could help you in being familiar with a variety of questions and their types.

A low score, in the initial stages of preparation is quite normal, since you may have not covered all the requisite knowledge areas and processes. However, you may have to work upon your weak areas if you end up getting a low score, a few days before you have scheduled your test.

PMP® experts recommend a first time score of 80 % and above in all good full length mock tests to know that you are ready to take up the PMP® certification exam.

5. Encountering difficult concepts while preparing for the exam

While studying for the PMP® certification exam, be prepared to encounter concepts that could rack your brains. These are concepts which could take up a lot of your time and efforts. However, experts recommend the use of several resources including prep books, authentic websites and discussion forums, for the answers to your queries and concerns.

If a concept is taking up too much of your time, you could focus on something else and come back to it later. You could also practice working on several important concepts in a single day rather than focus on a single concept. This way, you could boost your morale even if you are able to comprehend a few concepts, if not all that you had planned to study for the day.

However, it is not a good idea to avoid these concepts since the PMP® certification exam could have several questions which are based on these concepts.

6. Is the PMP® certification examination worth all the effort that I am putting in?

When you encounter several personal and professional challenges while studying for the exam, you may ask yourself this question "Is it worth all the effort”. This could be a serious demotivating factor which could stop you from taking sincere efforts in being prepared for the exam.

However , you could ask any PMP® pass out or visit any authentic blog to know the answer to your question .The certification offers several benefits including better job prospects , better salary , networking benefits , and knowledge enhancement , besides others .

The PMP® certification exam is a tough exam which tests your knowledge and your ability to apply them in various real life scenarios. Motivation could be one of the key factors which could help you in staying focused before the exam. However, aspirants tend to be demotivated and lose their focus while dealing with personal and professional challenges.

Therefore, aspirants could take a look at factors that demotivate them before the exam and come up with solutions to deal with the challenges.