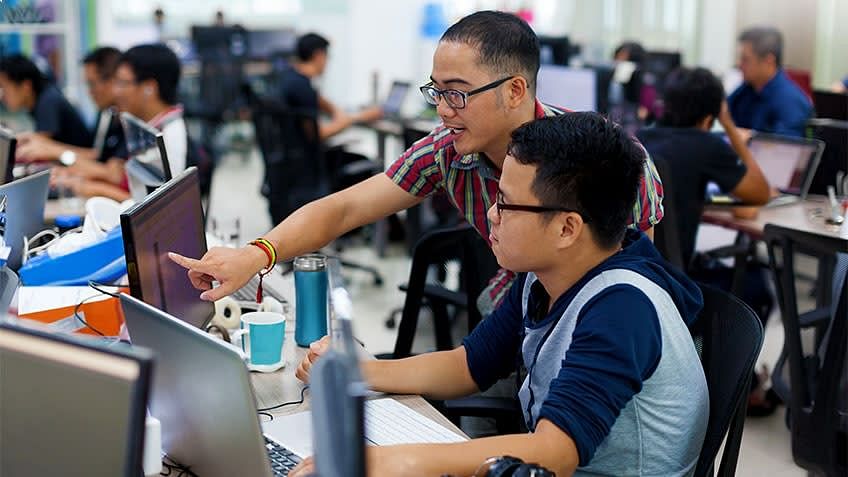 It’s an exciting time to be a software developer. Transformational changes are taking place not only in advanced technologies like machine learning, AI and data science, but also in revolutionary transactional foundations like blockchain and the way software itself is developed and deployed. Software developer is now rated as the #1 best job in the U.S., and the profession is poised to have a profound impact on businesses and consumer trends. For software development teams to remain in step with the rapid changes in the industry, they must place upskilling at the center of their strategic approach.

A key trend in software development is the increasing need for technology professionals who are skilled in several disciplines and capable of managing multiple phases of the technology life cycle. Full-stack engineers, for example, are expertly trained to build feature sets from top to bottom for both back-end (servers/databases) and front-end (web/apps) technology platforms. These developers help companies do more with fewer resources and are able to take a concept and turn it into a finished product. Full-stack engineers were recently rated the #1 most requested position in the Hired State of Salaries Report. Full stack certification training covers a wealth of valuable skill sets for these highly prized developers.

Following in the footsteps of multi-skill, cross-platform positions like full stack engineers are DevOps engineers. DevOps (or development + operations) is a software development and delivery process that establishes better collaboration between the people that develop, deploy and align software with business objectives. DevOps engineers are trained to execute multiple disciplines across this spectrum to manage cross-functional teams, reduce bottlenecks and improve IT and project agility. Accordingly, DevOps engineers were the #4 most requested position in the Hired State of Salaries Report. A DevOps Engineer certification or DevOps Bootcamp can help technology workers expand their expertise across the development and operations segments.

As a new financial and transactional platform, blockchain and digital currencies are just getting started. Companies will begin investing heavily in Blockchain technologies over the coming years, with the global blockchain technology market predicted to reach $2.3 billion by 2021, from $340 million today. And 90 percent of major North American and European banks are exploring blockchain solutions. That leaves ample opportunity for software developers to hone their expertise in blockchain platforms, build blockchain applications using advanced developer tools, and learn how to design, test and deploy blockchain contracts in the real world. Blockchain certification training is an ideal first step to attaining expertise to thrive in this exciting field.

The Python development language has now surpassed Java as the top language used to introduce U.S. students to programming and computer science, and almost half of data science jobs list Python as a required skill. Moreover, Python is one of the most widely used technologies in data science, data visualization, natural language processing and many other highly advanced and influential fields such as machine learning. In fact, machine learning is one of the hottest areas in the artificial intelligence and data science fields, and there is a growing demand for professionals who understand the practical applications of machine learning. Innovation in the field is everywhere: Machine learning patents grew at a 34 percent Compound Annual Growth Rate (CAGR) between 2013 and 2017, the third-fastest growing category of all patents granted. Python certification training is central to mastering machine learning and data science technologies.

As Google CEO Sundar Pichai recently pronounced, "AI is probably the most important thing humanity has ever worked on. I think of it as something more profound than electricity or fire." AI applications are quickly moving into the mainstream, and as the market matures, it is creating demand for AI-skilled technologists. Jobs requiring AI skills have more than quadrupled since 2013, signifying increasing adoption of AI applications that drive industry growth. And the future impact in this burgeoning area is massive. Accenture research reveals that AI could double annual economic growth rates in 2035 by changing the nature of work and creating new relationships between man and machine, increasing labor productivity by up to 40 percent and enabling people to make more efficient use of their time. AI engineer certification training is something that should be made a part of team upskilling.

Software development technologies, languages and techniques are evolving too fast to ignore. Providing an opportunity for your development teams to learn these critical skills will let them know you’re dedicated to keeping them on the cutting edge and preparing them for the roles of tomorrow.

A Product leader with deep experience in building products across various industries and product types, Anand leads the product vision, roadmap and delivery at Simplilearn. Prior to this role, Anand headed the complete portfolio for the cloud division at Rackspace in San Antonio, Texas. He has also led product at Dell and National Instruments prior to this in products ranging from test and measurement software solutions to enterprise software solutions. Anand strongly believes in a customer driven, data augmented, lean approach to delivering products.