Email Refresher: The Difference Between CC and BCC

9 Common Project Risks and How to Tackle Them

By SimplilearnLast updated on Aug 2, 2022 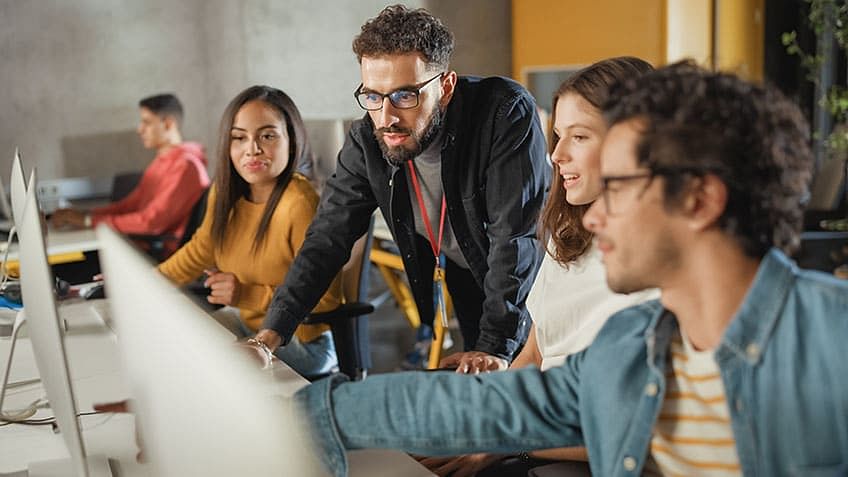 What Is Social Learning Theory?

The theory of social learning can be defined as the science of observing the behavior of surrounding people and applying the learning of such observation to oneself and bringing about progressive change. At the macro level, social learning is the process by which our opinions, core beliefs, world perceptions, gender roles, self-worth, and political views are shaped.

Some of the examples of observed behavior and social learning include motivation and work ethics. It is the process of changing our behavior by modeling it on the behavior of a successful person like a manager who has achieved an end that is desired. Social learning is complementary to specific learning contexts. However, it is a subconscious action which is part of everyday life.

The components of social learning are observation assessment, imitation, and identification.

Social learning begins with observing the behavior of other people. Therefore in relation to a specific situation, certain actions are observed. Immediately such behavior is mirrored since the outcome of the consequence becomes important.

It is seen that the behavior of a person will reflect that of a personality only when the results, as well as reactions, are desirable. When we observe something a person achieves we begin to analyze the practices of such a person to achieve the result.

It is seen that a person after observing and assessing a particular behavior will begin to mirror the same in order to achieve the same result or consequence. Therefore the component of imitation will occur within the scope of our own physical traits or experience and characteristics. It is theoretically the result of the consequence of a particular behavior based on many factors.

An important process of social learning is considered when the achievements, as well as the appreciation received by role models, are notable.  In this component, analyzing and adapting the behavior of the people is important. However, it is only when a number of learned behaviors come together, can imitation be developed. Hence attitude, views, language and the ability to feel very similar to the role model only will conclude in exact imitation of the role model.

In the traditional approach, the character of children was found to be influenced socially by the environment. Social pedagogy was built between the 19th and 20th centuries when leading philosophers like Rousseau, Kant, Plato, influenced educationists Karl Mager, Herman Nohl and Paul Natrop. The idea was relationship-centered and revolved around the responsibility of both parents and society in bringing up children. Stimulus response theory by Robert Richardson Sears is another contribution to this pedagogy.

The Father of Social Learning Theory can historically be traced to Canada-based American psychologist, named Albert Bandura. His contribution is related to Awareness, Retention, Reproduction and Motivation theories. No single learning approach fits all people but only by observation, imitation and modeling, behaviors can be built.

His contribution is about conversation and community being part of the learning process. He proposed that without input from society and other human beings, it will not be possible to develop. He also focused on the importance of oral learning or the spoken word in building thought processes.

His contribution has been in the field of ‘professional’ social learning, primarily career development called Career Decision Making (SLTCDM).

With the purpose of introducing enhanced processes to sustain business success, organizations are increasingly looking beyond old forms of corporate training. Instead, they want to introduce pedagogies which will offer them an ideal work-life balance. Hence, they are innovating the learning culture and one such theoretical approach to improving work-life paradigms is the social learning theory. The ROI on using this approach is 75:1 with online sessions, say industry institutions.

1. How do you apply social learning in the workplace?

In the workplace, social learning can be introduced through workshops, mentoring, coaching, group discussions and panels. Since the concept of social learning is driven by human nature to be accepted by others, workers will by observation, do things that will ensure they are part of the bigger group and want to behave and adapt behavior because of the consequences of behaving differently.

2. What is social learning at work?

Social learning at work will help people learn behaviors that differentiate between socially acceptable behaviors and those that are not acceptable. This will ensure that they adapt to the work culture of the organization. The process of observation ensures in-built quality to ensure they are acceptable and will adapt and approach to situations such as conferences.

3. How do you apply social learning?

After mastering the art of social observation, it can be applied by the individual  asking questions and adjusting one's behavior by observing people in the social context . This helps in building a cohesive society and community with needed mores and norms so that the desired outcome can be achieved. Therefore when any behavior is to learn by social environmental engineering that has a secular impact and could also set the others to behave similarly.

4. Why is social learning theory important in the workplace?

The importance of a social learning ecosystem is that employees are given the opportunity and responsibility of self-paced learning or personal learning. The training of employees is via instructors and training events.

You can improve your social learning and project management skills by signing up for our PGP in Project Management. Skill up with the support of live online interactive classes, masterclasses from UMass Amherst, Harvard Business Publishing case studies, and capstone projects.Enrol now and strat learning!