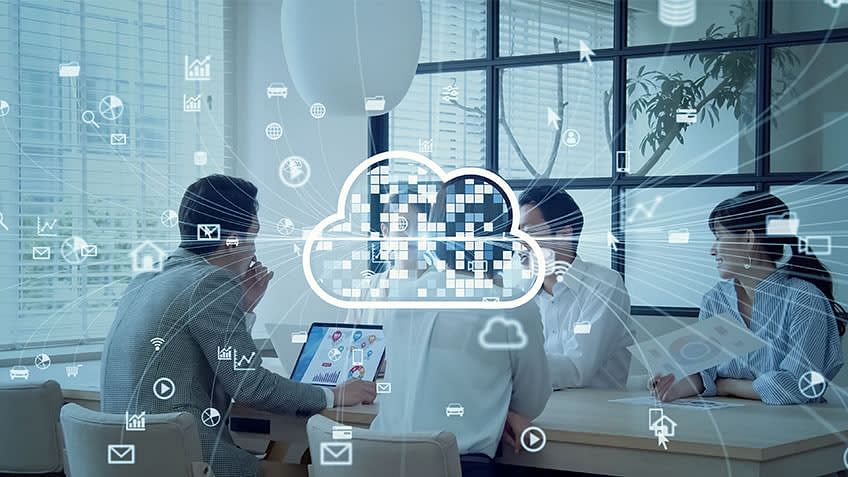 Cloud usage is climbing, thanks to factors like increasing home office usage (thanks to COVID) and advances in mobile networking. Fortunately, there is a vast selection of computing companies to help meet the rising demand.

Fortunately, that’s what we’re covering here. This article showcases U.S. cloud computing companies you should apply to and work for. We will cover topics such as cloud computing's history and the best cloud-related companies with the best U.S. cloud engineer jobs, among other opportunities. Once you finish this article, you will better know where to focus your attention in your cloud-related job hunt.

But first, a little history of cloud computing.

A Brief History of Cloud Computing

Cloud computing first appeared as a concept in the 1960s, when the Defense Advanced Research Projects Agency (DARPA) awarded MIT $2 million for project MAC, including a condition that MIT had to develop a means of two or more users simultaneously sharing a computer.

IBM and the Digital Equipment Corporation (also known as DEC or simply “Digital”) used Remote Job Entry to promote the concept of time-sharing computer resources. This concept became known as “virtualization.” Virtualization, defined as creating virtual infrastructures, devices, servers, and other computing resources, finally made the modern cloud possible when VMware was able to do it on commodity x86 hardware. By turning these established IT resources into virtual copies, a community of users can access them at the same time, set the stage for the cloud as we know it today.

In its initial stages in the 1990s, IT professionals defined the cloud as the empty space found between the end-user and the service provider. However, the definition evolved in that decade as more companies became aware of cloud computing’s potential. Finally, in 1999, cloud computing had its watershed moment as Salesforce debuted, became the business application, and showed the world the great potential of cloud computing.

In 2002, the world was introduced to Amazon’s web-based retail services, which gave rise to many imitators in the years following. Then, in 2006, Amazon once again took the lead by introducing Amazon Web Services, allowing users to access online services, including Amazon Mechanical Turk and the Elastic Computer Cloud (EC2), which let users rent virtual resources to run their applications. At the same time, Google launched its Google Docs services.

Netflix, formerly known for its DVD-rental service, launched its streaming service in 2007, taking full advantage of the cloud.

Docker introduced viable containers in 2013, which became extremely popular. Consequently, many legacy tools were adapted to work with containers, including the container orchestration system known as Kubernetes, developed in 2014 by Google.

In 2016 the cloud started to evolve from a developer-friendly entity to a developer-driven one. As a result, application developers began taking full advantage of the cloud and its tools.

So much for “brief!” Now, let’s look at those top U.S. cloud computing companies!

Here’s a list, in no particular order, of some of the best U.S. cloud computing companies to work for. Whether you’re looking for U.S. cloud engineer jobs, cloud architect jobs, or cloud consultant positions, this resource can help you narrow down your choices. Given the vast amount of cloud coputing companies to look at in the U.S., this list list is by no means exhaustive.

Company Size: 10,000+. This one’s no surprise, considering AWS practically wrote the book on cloud computing providers. Not only is AWS the largest platform vendor in the world, it also specializes in analytics, blockchain, containers, storage, and machine learning, among others.

Company Size: 10,000+. While AWS is the cloud computing pioneer, VMWare has the same prominence in the world of virtual machines and is one of the world’s top virtualization and cloud computing companies.

Company Size: 50-249. IT Svit is a reputable Big Data and DevOps service provider with a staff of over 60 software developers, Big Data architects, and DevOps engineers who offer end-to-end solutions for business projects of all sizes and types.

Company Size: 10,000+. You knew they had to appear somewhere on this list, right? Microsoft is particularly highly rated for Cloud Engineering positions, scoring one of the better scores for a non-military employer according to Indeed.

Company Size: 10,000+. This telecommunications giant is another no-brainer for Cloud Engineers. Reviews on Indeed are positive, with the company’s compensation score being particularly noteworthy.

Company Size: 10,000+. Deloitte is a highly regarded accounting and professional services firm that delivers financial and technical consulting solutions. In addition to their cloud solutions, they also offer to help their clients with analytics, risk and financial advisory, audit and assurance, and much more. They have over 80 locations throughout the United States.

Simplilearn can give you a valuable career boost if you want to become a Cloud Engineer or one of the countless other cloud-related professionals. The Caltech Cloud Computing Bootcamp teaches you to become an expert in designing, planning, and scaling cloud implementations. Simplilearn’s Cloud Computing course, held in partnership with Caltech, helps you master the core skill sets you need to design and deploy dynamically scalable and reliable applications on Microsoft Azure and AWS.

According to Indeed, Cloud Engineers can earn a yearly average of $119,913. Let Simplilearn help you begin a new and exciting career in the rapidly growing field of cloud computing. Visit Simplilearn today, and master the cloud!

Top Cloud Computing Companies to Work for in 2023