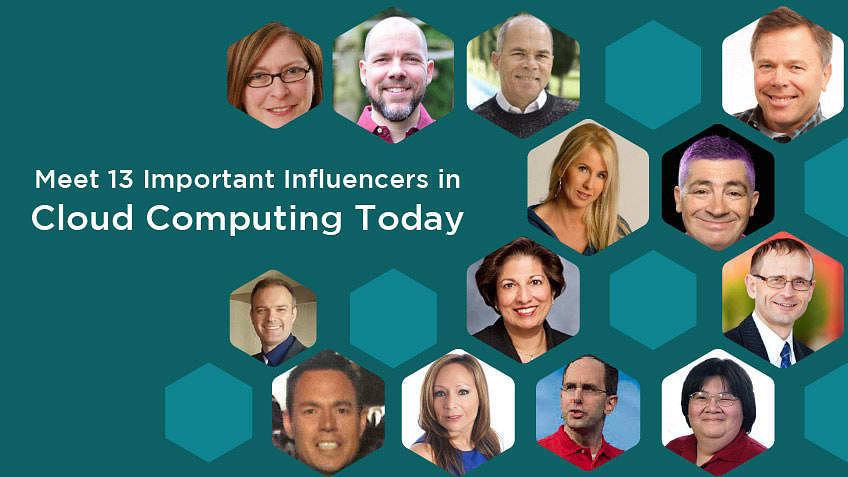 According to an article published by ComputerWeekly, cloud computing as a concept dates back to the 1960s, but it wasn’t until the 1990s that we had the bandwidth to make it a reality for the masses. Since then, cloud computing has become commonplace in IT, and the worldwide public cloud services market continues to grow at a rapid pace. In the meantime, the technologies and iterations also continue to expand, with cloud service providers like Amazon Web Services (AWS) continuously developing new services to improve upon existing cloud capabilities.

In the list of cloud computing influencers below, we’ve tried to bring you a mix of all of the above, from the journalist to the technologist to the evangelist. We’ve also looked across the playing field to bring you influencers from some of the major providers, including AWS, Azure and Digital Ocean.

Use this list to find the influencers most relevant to your position in cloud computing.

Vanessa Alvarez is currently with Microsoft, leading the go-to-market strategy for hybrid cloud with Azure. She has also worked at AWS and Forrester. She has been an active member of CloudNow since its founding, and she has repeatedly been named a top woman in cloud computing. She also strives to bring more women and Latinos into the technology field.

Jeff Barr is the Senior Evangelist at Amazon Web Services which almost makes him an influencer by default. Jeff has been a critical member of the AWS team from the start. As an evangelist, he encourages developers to create new and innovative applications using AWS and has been maintaining the AWS blog since 2004. To date, he has written over 2,500 blog posts that are interesting as well as informative, as he spreads the word about the latest and greatest AWS offerings.

As Gordon Davey himself puts it, he is busy “explaining cloud computing with a Scottish accent,” while on social media. He must be doing it well because he has been ranked among Onalytica's list of Top 100 Cloud Influencers on Social Media as a result. Formerly with Dell as the UK Cloud Strategy Director, Gordon is now Head of Cloud Architecture at Willis Towers Watson. Gordon strives to help organizations to understand how to use cloud computing effectively, by simplifying the message and raising awareness of the possibilities.

Marc Weaver is a certified AWS Solutions Architect who first spent over 15 years as a database administrator for investment banks. In 2015, Marc founded his company databasable to concentrate on the areas of technology that he was most passionate about; databases and cloud computing. With a core concentration on AWS, databasable helps companies make their businesses more efficient, secure and cost-effective. Marc is also a cloud computing advisor for Simplilearn, where he authors courses on AWS solutions architecture and database migration.

Duncan Epping is the Chief Technologist at VMware, a leading cloud provider. There he works as the lead evangelist, connecting the R&D team with customers, partners, and the field. He focuses on defining and communicating the company’s storage and availability vision and strategy and is decidedly an expert in the field, with 5 patents granted and 1 patent pending on the topic of availability, storage, and resource management. Duncan is also a prolific author and blogger, having been voted one of the most influential people within the virtualization industry.

Bernard Golden is the Vice President of Strategy at ActiveState and someone who appears on quite a few lists of cloud computing influencers, as he is also an avid cloud blogger for CIO. Bernard has been named one of Wired’s top ten most influential people in cloud computing, and he is the author of several books, including “Virtualization for Dummies” and “Amazon Web Services for Dummies.”

Scott Guthrie is the Executive Vice President of the Cloud and Enterprise Group at Microsoft. In that role, he heads the Microsoft Azure team, and he is responsible for the cloud, server, database, business apps, security, management, and development tools businesses. Scott as an influencer is someone striving to move Azure forward to capture more of the market share currently dominated by AWS.

Try to find a list of cloud computing influencers that doesn’t mention Lydia Leong. As one of the first analysts to cover cloud technology and its rise to popularity, and today the resident cloud expert at Gartner, she is a proven force in the industry. As a researcher and technology analyst at Gartner, Lydia covers cloud computing as well as other topics such as Infrastructure as a Service, data centers, hosting, content-delivery networks and other topics related to the transformation of IT organizations transitioning to the cloud.

As the CEO of Thulium, Tamara McCleary is not a cloud computing expert, but her social media dominance makes her an influencer in many technology domains. Tamara is an international branding expert, technology futurist, and digital marketing strategy consultant. She is ranked by Klear in the Top 1% of global Social Media Influencers and she is regularly listed as one of the Top 50 Social Influencers by Onalytica. She was named the #1 Most Influential Woman in MarTech by B2B Marketing.

As the Senior Technical Marketing Manager at F5, Lori MacVittie drives education and evangelism across F5’s solution set. Lori is a subject matter expert on cloud computing, cloud and application security, and application delivery. Her blog has led to her recognition as one of the top 50 bloggers on cloud computing, and she is the co-author of the book “The Cloud Security Rules.”

Manjula Talreja is one of those behind-the-scenes influencers who give those on Twitter something to tweet about. Currently, the Vice President of Global Cloud Business Development at Cisco, Manjula develops new business models and partnerships with technology vendors, service providers and integrators working in the cloud market. Considered one of Cisco’s cloud computing thought leaders, she’s known for her expertise in both the technical and business aspects of the shift to cloud computing.

Ian Moyse is an experienced cloud salesperson and a dominant social influencer in the cloud computing domain. His cloud computing activity on Twitter earned him the #1 Social Media influencer spot on Onlytica’s list. Ian is also a popular keynote speaker on the topic, and he guest blogs for Oracle, Equinix, Cloudtech, and Maximiser.

David Skok is another top cloud computing social media influencer on Twitter, and a venture capitalist investing in cloud computing technology, as well as SaaS and infrastructure software companies. David is a serial entrepreneur, the founder of MatrixPartners, and the author of the forENTREPRENEURS.

Although it started 50 years ago as a nebulous idea, cloud computing is now the way we do IT, and it will continue to evolve as subject matter experts work to overcome obstacles and continually improve the effectiveness and efficiencies of cloud computing, whether they are working at a provider like AWS or Azure, or in-house as a client of one of the major providers. Through these activities cloud computing influencers will continue to either bring about the changes or bring them to our awareness, so we can all move forward towards better infrastructure, services, processes, and security…because a rising tide really does lift all boats.