Difference Between Hashgraph and Blockchain 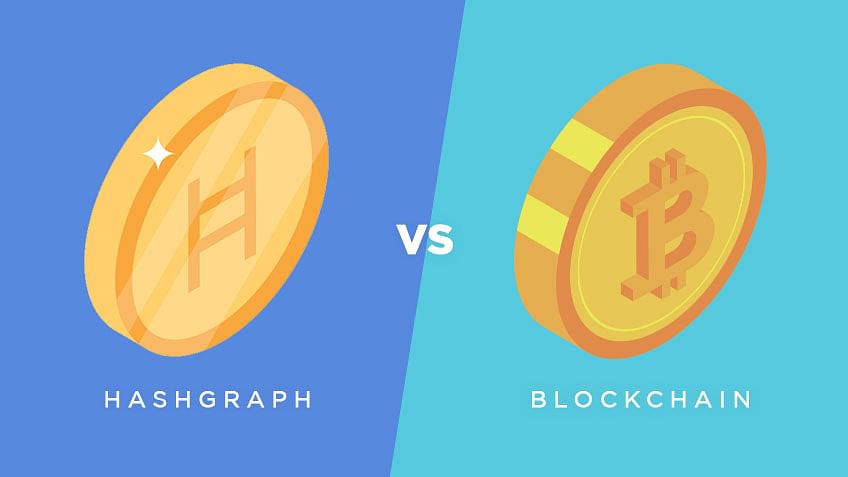 Blockchain technology is a revolutionary way of securely storing and exchanging data. It is a distributed public ledger that is used to record and store all transactions that take place across a peer-to-peer network. By leveraging the power of cryptography, each transaction is verified and encoded securely, ensuring that it remains immutable and tamper-proof. This creates an immutable record of transactions that cannot be defrauded or manipulated, making it a highly secure way of storing data.

Blockchain technology is a revolutionary way to store and transfer data securely; it is verifiable and immutable. It is a digital ledger that records transactions between two parties in a permanent, public, and distributable way. The use of cryptographic hashes creates trust between participants without the need for third-party verification. This technology has been used to develop new applications, like cryptocurrencies, that are becoming increasingly popular due to their decentralized nature and ability to be exchanged for traditional currencies.

Pros and Cons of Blockchain

The pros of blockchain are vast and include the following:

The cons of blockchain are that it can be challenging to understand.

What Is Hashgraph? How Does it Work?

Hashgraph is a revolutionary new type of distributed ledger technology (DLT) invented by Leemon Baird that utilizes a directed acyclic graph (DAG) data structure to deliver a consensus protocol or a way of reaching an agreement among distributed systems on data validity.

Hashgraph is a new distributed ledger technology that is designed to solve the problem of Byzantine failures. It does this by using a gossip protocol and virtual voting. The gossip protocol in Hashgraph is similar to how gossip spreads between friends in a social network. The difference here, though, is that the information being applied are transactions and who they have been sent to (not what they say). This means no one knows who created the transaction, only which node it has been sent to. This makes it impossible for anyone to forge transactions or send fake ones as no one knows who created them or where they have been sent, so there's no way of knowing if you're being lied to or not when you hear about them second-hand.

Pros and Cons of Hashgraph

Despite its many advantages over traditional blockchain technology, Hashgraph has a few drawbacks.

Hashgraph and blockchain are both technologies that provide secure, distributed ledgers for recording data. Hashgraph is a newer technology created in 2016, whereas blockchain, the underlying technology of Bitcoin, was built in 2008. Hashgraph has several advantages over blockchain, including faster transaction speeds, higher throughputs, and more advanced consensus algorithms. Whereas blockchain was initially developed to provide a secure, distributed ledger for Bitcoin transactions, Hashgraph's consensus algorithm allows it for much more than just cryptocurrency - it can be used for smart contracts and other distributed applications.

When deciding which technology is better, Hashgraph or blockchain, it comes down to the specific application used. For example, some applications benefit from faster transaction speeds and higher throughputs, in which case a Hashgraph would be a better option. However, blockchain might be the better choice for applications requiring a high degree of security and decentralization. Ultimately, both technologies are powerful tools for distributed applications, and it's up to the developer to decide which one is best suited for their needs.

Blockchain technology has gained traction in finance and technology over the past few years. The underlying technology allows cryptocurrencies such as Bitcoin and Ethereum to exist. Blockchain technology is mainly used to create a secure, distributed database where information is stored in blocks linked together with cryptography. This makes it virtually impossible to manipulate data or records stored on the blockchain.

Blockchain technology has seen rapid adoption in the last few years for a good reason. It provides unparalleled security and transparency, allowing for secure and anonymous transactions. But it can also be used for more than simple payments. Key blockchain implementations are being developed that can be used to create a distributed ledger, verify identities, and even automate contracts.

Use Cases and Real-life Examples

Real-world applications of blockchain technology are being developed and implemented in various industries. For example, the Hashgraph algorithm is being used to build a distributed ledger that can be used to facilitate secure and anonymous transactions. Additionally, the blockchain is used in healthcare to store medical records and securely verify patients' identities. The technology is also being used to automate contracts, allowing for faster and more secure transactions. One of the most popular uses of blockchain technology is for cryptocurrency payments, like Bitcoin and Ethereum. But blockchain technology has many other potential use cases as well. For example, a Hashgraph is used as a distributed consensus algorithm, allowing secure distributed networks in various industries. Hashgraph is used in the energy industry to secure energy transactions, in healthcare to store patient data securely, and in banking to create a distributed ledger for financial transactions.

There are many use cases for blockchain technology and Hashgraph. One of the most popular is in finance, where it is used to facilitate payments and trades securely. In healthcare, blockchain is being used to store and manage patient data, providing secure access to only authorized personnel. In art, blockchain is used to create digital art and verify ownership.

Hone all the technical and functional skills to build a Blockchain application using the latest tools and technologies. Enroll today for this one-of-a-kind Professional Certificate Program in Blockchain co-curated by IIT Kanpur.

Blockchain and Hashgraph technologies have the potential to revolutionize many industries and sectors. Thanks to their distributed computing capabilities, they can create secure and transparent networks resistant to fraud and manipulation. This could completely change how we track and transfer financial data, store medical records, and view energy transactions. As these technologies continue to develop, the possibilities are sure to be endless.

If you are looking to improve your Blockchain skills further, we recommend you check Simplilearn’s Professional Certificate Program in Blockchain. This course, in collaboration with IIT Kanpur, can help you hone the right Blockchain skills from the best faculty of IIT Kanpur and make you job-ready.