HomeResourcesProject ManagementChanges to PMI's ACP Exam: All you need to know

Changes to PMI's ACP Exam: All you need to know 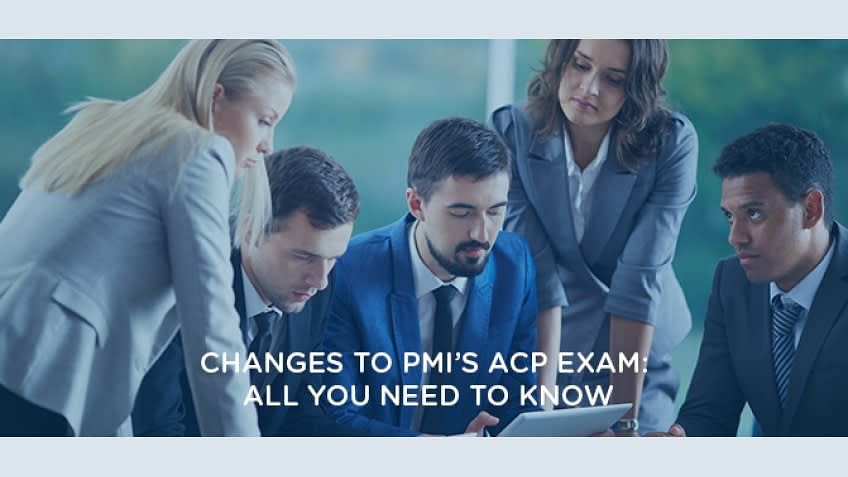 PMI-ACP® Exam was first launched as a certification for Agile project management practitioners on 31st January, 2012. Agile knowhow and the Agile body of knowledge has come a long way since then. In order to better and more properly align the ACP® certification with the new-look requirements of the Agile profession, PMI® has revised the exam syllabus of the PMI-ACP® certification examination that will be effective in its new version as a pilot run from 15 July 2015, for 3 months.

Why A New PMI-ACP® Exam?

As many Project Management hopefuls would be aware, PMI® has undertaken a Role Delineation Study to survey Agile practitioners from across the globe to determine how Agile professionals and organizations are specifying their job descriptions and responsibilities.

Based on this study, the new findings are accommodated in the new PMI-ACP® Exam syllabus with an attempt to put the exam’s content on a par with real world practices. This recent update to the PMI-ACP® Exam syllabus will sustain the value of the PMI-ACP® Certification and make sure that the holders learn the relevant skills to successfully practice Agile as per the present scenario.

The Changes In The PMI-ACP® Exam- What’s New?

A new domain of practice has been included by PMI®, which is called “Agile Principles and Mindset”. Because of this new domain, the total number of tasks to be tested has gone up from 56 to 62. The domains on which the allocation of questions depends now include:

Also, new Tools and Techniques / Knowledge and Skill are added, including the following items:

Since most of these areas are part of the mainstream Agile body of knowledge, they are already included in the most current PMI-ACP® exam reference books and courses.

All the changes are documented in the new PMI-ACP® Exam Content Outline.

Also, the list of reference books for the PMI-ACP® exam has also been updated online, with the addition of several new books and the removal of a few.

Overall, there are 12 reference books for the new PMI-ACP® Exam -1 more than for the old exam:

It is interesting to note that there is now a greater emphasis on “Kanban” and “Scrum”, along with the additional reference books on these titles. This trend was also noticeable in the knowledge areas of the exam questions of PMI-ACP® Exam candidates over the past year as an increasing number of questions have begun to appear on Kanban, Lean, and Scrum.

To appear for the PMI-ACP® Exam, an Agile practitioner will need to have:

Once the Agile practitioner qualifies, he or she has to fill in an online application form on the PMI® website to apply for the PMI-ACP® Certification. PMI® will review the submitted application to verify if the seeker fits to take up the exam. Such Audits on the PMI-ACP® applications may be done on a random basis.

Important Dates- When can one appear for the PMI-ACP® Exam?

15 July – 14 October 2015: PMI-ACP® candidates can take up the new version of PMI-ACP® exam. However, the exam result and scores won’t be out immediately, even if they appear for the computer-based exam. This is because PMI® takes time to assess the suitability of the exam questions and adjust the passing rate. Results can be expected by 22 October 2015.

From 15 October 2015: From here on, PMI-ACP® candidates will receive the exam score immediately for the new PMI-ACP® exam.

Hemant Deshpande, PMP has more than 17 years of experience working for various global MNC's. He has more than 10 years of experience in managing large transformation programs for Fortune 500 clients across verticals such as Banking, Finance, Insurance, Healthcare, Telecom and others. During his career he has worked across the geographies - North America, Europe, Middle East, and Asia Pacific. Hemant is an internationally Certified Executive Coach (CCA/ICF Approved) working with corporate leaders. He also provides Management Consulting and Training services. He is passionate about writing and regularly blogs and writes content for top websites. His motto in life - Making a positive difference.

Find PMI-ACP® Certification in these cities