HomeResourcesBusiness and LeadershipWhat Salary Can You Earn as a UX Designer?

Best Leadership Books You Should Read in 2023

What is Productivity? How to Define and Measure It?

What Salary Can You Earn as a UX Designer? 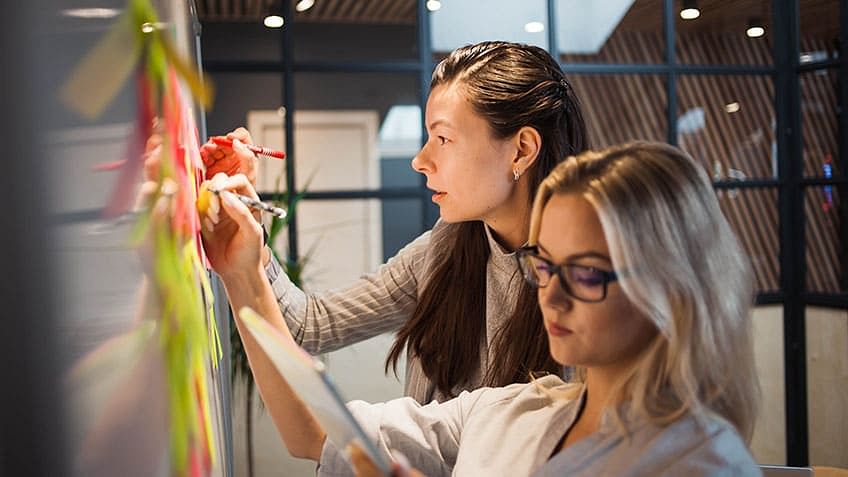 Whenever you log onto a website, try on a pair of pants, take a city bus, or navigate an app on your phone or laptop, you are interacting with the product or service and having what is called a user experience. As you may imagine, you have many user experiences (called UX for short) every day.

Some professionals aim to make a service or product usable, accessible, and enjoyable. These are UX designers. Professional UX designers understand the user and the brand, conduct user research, analyze the findings, perform the design work, employ users to test the results, and present the work to the organization or client.

Perhaps you're looking for a new career, and UX design appeals to you, but you want to ensure your new vocation has a livable salary. Or maybe you're already a UX designer looking to change companies or move to a new location. Whatever your situation, this article is a guide to UX designer salaries.

We will look at things that impact UX salaries, including a breakdown by country and company, and offer insights into how to maximize your UX designer's starting salary. Let's get started!

The United States Bureau of Labor Statistics predicts a 23% growth rate for web developers and digital designers, and the latter influences UX designer demand. That points to a healthy picture for UX design professionals looking for a position.

Many factors affect UX salaries (and, for that matter, salaries for any vocation). Moreover, some of these factors can fluctuate monthly, weekly, or even daily. That’s because factors like demand are in constant flux. Here are the most common situations that impact UX salaries.

Salaries vary depending on the UX job title. For example, a UX designer could earn $115,000 annually, while a UX researcher may potentially earn $128,000 a year. These salaries are affected by demand and location.

When a business pays you to work, they rent your time and your skill set. The more skills you possess, the greater the earning potential. Entry-level UX designers aren't going to make as much as someone in the industry for a decade.

Regarding job experience, UX skills are a vital determining factor. UX designers need various technical and soft skills, so the more skilled you are, the more valuable a resource you are. Consequently, the more compensation you earn.

UX designer demand varies by location, which is reflected in the salary and benefits package. Not every city (or nation, for that matter) pays the same. This figure varies by factors such as the area's demand and cost of living.

Let's call this a "catch-all" category, considering things the other categories don't cover. For example, we mentioned the pandemic earlier. Sometimes, an unexpected situation arises that will impact, for better or worse, the job market. You can’t plan for them; you can’t change them; the best you can do is watch for them and try to use them to your advantage.

Not every nation pays the same for UX designers. Here’s a breakdown of the most popular locations. Remember that these salaries can fluctuate; the best opportunities lie in each nation's major cities. These figures are annual averages.

The average UX designer salary in Australia is currently $120,134 (AUD)

The average UX designer salary in Canada is currently $102,832 (CAD)

The average UX designer salary in China is currently ¥296,565

The average UX designer salary in France is currently 63,214 € (Euro)

The average UX designer salary in Germany is currently 52,250 € (Euro)

The average UX designer salary in India is currently ₹800,000

The average UX designer salary in the United Kingdom is currently £48,150

The average UX designer salary in the United States is currently $117,422

Here’s a breakdown of UX designer salaries by the organization. Note that these are annual averages and are present in US Dollars (except for the BBC). These figures can be affected by experience, skill set, and location. Also, tech sector companies typically pay more than their counterparts that are not part of the sector.

Adobe, the creative software giant, pays a yearly average of $116,000.

Adidas, one of the largest sporting lifestyle companies in the world, pays a yearly average of $91,000.

Alibaba, one of the largest e-commerce corporations in the world, pays a yearly average of ¥60,000

The online retail giant Amazon pays a yearly average of $116,000.

The British Broadcasting Corporation pays a yearly average of £44,000.

Google, the most popular search engine in the world, pays a yearly average of $130,000.

The venerable tech giant IBM pays a yearly average of $89,000.

Are UX Designers in Demand?

As more businesses have grasped the User Experience (UX) concept, they have seen the need to bring UX designers on board. As a result, there has been a strong demand for UX designers going back at least a year, and UX designer is one of the top jobs for 2022-23.

Factors such as the COVID-19 pandemic and customers increasingly turning to online shopping have helped drive demand. So, if you're concerned about the long-term picture, no worries; all signs point to a continued strong need for years to come.

How to Negotiate Your First UX Salary

Salary discussions, whether you’re new to the industry or an experienced professional, are tricky things. So many people feel awkward talking about money and financial issues with the people they know, let alone a perfect stranger!

Salary negotiation is a tightrope act. You don’t want to price yourself out of a job, but if you undersell yourself, the interviewer could infer that you don’t have much to offer. After all, if you don’t value yourself and your skill set, why should anyone else?

Here are a few considerations when you negotiate your salary.

Well, that’s what you’re doing here, so congratulations, you’re on your way! First, check out median salaries and get an idea of what constitutes a reasonable asking offer. Then, visit sites such as Payscale or Glassdoor for current figures. Remember, they change often!

The beauty of a UX career is that you don’t have to possess a background in design or tech to become a UX designer. Instead, look at your current marketable skills and determine which ones can be transferred to a UX design career.

Additionally, check out online courses and bootcamps to ramp up your skill set and gain certification. We’ll touch more on that later.

Take an Inventory of Your Auxiliary Skills

Once again, you can round out these skills through education, specifically with online courses.

Network With Your Peers and Ask Around

Word of mouth is an effective means of spreading good (or bad) news. Thus, you can gain valuable insights by asking around, especially UX designers currently working. Build lines of communication with peers, industry contacts, former mentors or teachers, and experts in related fields. This outreach will provide valuable first-hand information and strengthen and expand your social network, which can prove invaluable when job-seeking. After all, sometimes it's not what you know; it's who you know!!

Salaries for Other UX-Related Roles

Let’s take a brief, shallow dive into the salaries for other positions in the UX industry. Most of these figures come from Payscale and represent an annual average for United States-based positions.

Some companies want their UX professionals to have experience in designing user interfaces (UI). The average salary is $91,950.

UX writers handle written content, and many UX designers write microcopy to one extent or another. The average salary is $110,000.

UX designers rely heavily on research. If you want to focus on that aspect, the average salary is $108,000.

UX strategists focus on stakeholders and business acumen; the average salary weighs in at around $92,000.

How Are Things Looking for UX Designers, and What’s the Takeaway?

The world needs more UX designers, and the global market is growing more extensive and competitive. Companies must keep up by producing more enjoyable and easily used products and services.

According to a study conducted by Glassdoor, UX design has been ranked as the sixth highest paying entry-level job. As a result, there's a robust demand for UX designers, and the starting salaries are very competitive.

And as the UX design field continues to expand into non-technical industries such as education, fashion, movies, and social and cultural wellness projects, there is a corresponding greater need for quality UX designers.

So, What Should You Do Now?

Now that you have a sample of salary information and an idea of how to talk about salaries, it’s time to put your knowledge to use! Take a mental inventory of your skill set, note where the gaps are, and fill those gaps with knowledge, preferably from online learning resources.

How to Become a Qualified UI/UX Design Expert

If you’re looking to learn more about how to design user interfaces as well as nail down valuable user experience skills, check out Simplilearn’s UI/UX Design Expert Master's program. This essential course teaches you a design-centric approach toward user interface and user experience. You will learn about UX research, UI styling, the user-centered design process, usability testing, wireframes and prototypes, and a lot more.

So, don’t delay; visit Simplilearn today and get the skills you need for a great career in UX design.