What Is Blockchain Security: Challenges and Examples 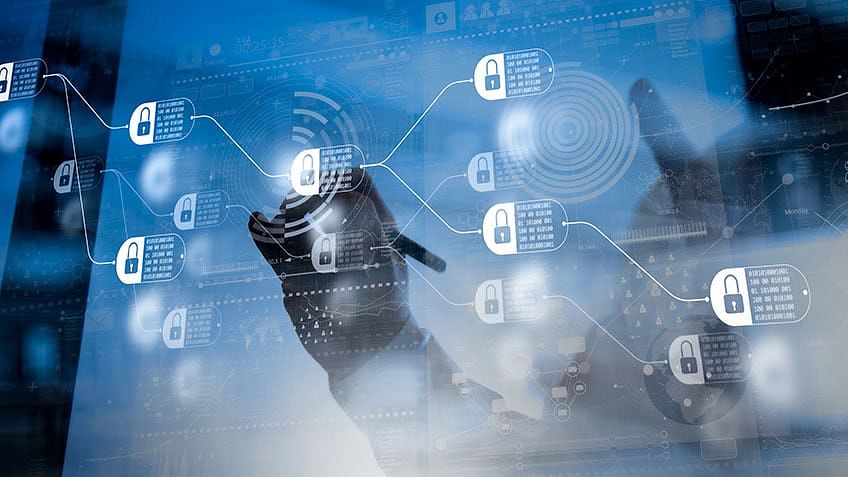 Everyone is concerned about cybersecurity today, and they should be as cyber-attacks are on the rise. However, it seems that whenever a new IT advance comes along, people ask, “How secure is it?”

Blockchain is a relatively new technology originally created to support Bitcoin. However, the technology’s popularity has soared, and people are discovering that blockchain has uses that go beyond cryptocurrency. This newfound popularity, naturally, begs the question of blockchain’s safety and integrity.

After all, if big companies like IBM, Walmart, and FedEx use blockchain technology, it would be reassuring to know that the security aspect is up to the task.

What is Blockchain Security?

We begin by reminding ourselves about blockchain itself and what it is. Blockchain is a distributed ledger technology (DLT) designed to engender trust and confidence in an environment. Blockchain is a decentralized ledger system that’s duplicated and distributed across a whole network of computer systems. It allows information access to all designated nodes or members who can record, share, and view encrypted transactional data on their blockchain.

Blockchain technology gathers and stores information in groups, also referred to as “blocks,” and each block can hold a certain amount of data. When the block reaches capacity, it is chained to the previous full block, creating a chain of data, hence the clever name “blockchain.”

Blockchain technology's data structures have inherent security qualities because they are based on consensus, cryptography, and decentralization principles. Each new block of information connects to all the previous blocks in a way that it's nearly impossible to tamper with. In addition, all transactions in a block get validated and agreed on by a consensus mechanism (authorized users), guaranteeing that each transaction is true and accurate. Thus, there is no point of failure, and a user can’t change transaction records.

However, blockchain security goes even beyond its inherent security characteristics. Here’s how.

What Are the Types of Blockchain?

Before we explain how blockchain provides security, we need to point out several types of blockchains, each with unique challenges.

Private blockchain networks require an invitation. Users must be validated by either the network’s central administrator or starter or by a rule set put in place by the network’s administrator. Businesses that use private blockchains typically set up a permissioned network. Permissioned networks limit who can participate in the network and the types of transactions they can initiate. In any case, participants need either an invitation or permission to join.

Private blockchains typically use a “Proof-of-Authority” (PoA) consensus approach and are often used in internal, business secure environments to handle tasks such as access, authentication, and record keeping. The transaction data is typically kept private.

Public blockchains focus on participation and transparency. Transaction consensus is “decentralized,” meaning anyone can participate in validating network transactions, and the software code is open-source and available to the public (e.g., Bitcoin and Ethereum).

The main characteristic of public blockchain networks is decentralization through cryptoeconomics, made to ensure cooperation throughout a distributed network. In public blockchains, it means the network has no political center of control, and the software system design has no architectural central point-of-failure.

How much of a blockchain is decentralized relies on the design of the consensus algorithm, network governance, ownership of cryptographic “private keys,” and providing economic incentives. Consider, for instance, the concept of “data mining,” where users earn cryptocurrency by validating transactions. This reward gives people the motivation to join the network and participate in validating the transactions.

However, as far as access goes, anyone can join and validate transactions, and that's the significant difference between public and private blockchains.

Consortium blockchains can reach consensus via “Proof-of-Work” (PoW), “Proof of Authority (PoA), or “Proof-of-Stake” (PoS). In addition, there are other available methods, such as delegated proof-of-stake.

Consortium blockchains are best suited for use between known parties, banking, supply chain management, or Internet of Things (IoT) applications.

Blockchain isn’t perfect. There are ways that cyber criminals can manipulate blockchain’s vulnerabilities and cause severe damage. Here are four ways that hackers can attack blockchain technology.

Here’s a handful of examples of how companies and organizations are conducting blockchain security.

Here’s another California-based cryptocurrency company. Coinbase is an exchange for selling and purchasing digital currency. Running entirely on encryption, Coinbase stores wallets and passwords in a secure database. Employees must undergo a rigorous background check to ensure cryptocurrency safety.

J.P. Morgan is the largest and one of the most popular financial institutions in the United States. It has developed an enterprise-focused version of Ethereum called Quorum, using blockchain technology to process private transactions. J.P. Morgan uses smart contracts on their Quorum network to create transparent yet cryptographically assured transactions.

This California-based tech giant believes that blockchain is ideally suited for the Internet of Things (IoT) because the inherent ledger technology does away with single points of failure and secures vital private data with encryption. This idea is significant since the Internet of Things has been growing steadily. If blockchain technology becomes the preferred IoT network, this will boost blockchain’s visibility and use. Of course, it doesn’t hurt to have a big IoT player in your corner!

Do You Want More In-Depth Knowledge of Blockchain?

If you would like to pursue a blockchain-related career or just upskill your current skill set, you should check out Simplilearn’s Professional Certificate Program in Blockchain. The course, carefully curated with IIT Kanpur and designed for all levels of expertise, gives you valuable insights into real-world blockchain applications. The program includes world-class instructions, outcome-centric bootcamps, and hands-on projects and teaches you about Bitcoin, Hyperledger, Ethereum, Ripple, and Multichain blockchain platforms. You will also learn how to set up a private blockchain network using Hyperledger Composer and deploy smart contracts on Ethereum.

Also, blockchain’s increasing popularity means you will find it used more often in web and application development roles, such as Java full stack developers and PGP full stack web developers. So even if you’re not looking for a career change, you can boost your skills and versatility by learning about blockchain.

Whether you want a new career or just want to learn the latest blockchain technology, Simplilearn has what you need. Check out our courses today!