What Is SaaS (Software as a Service) In Cloud Computing?

What is the Internet? Reviewing the Basics 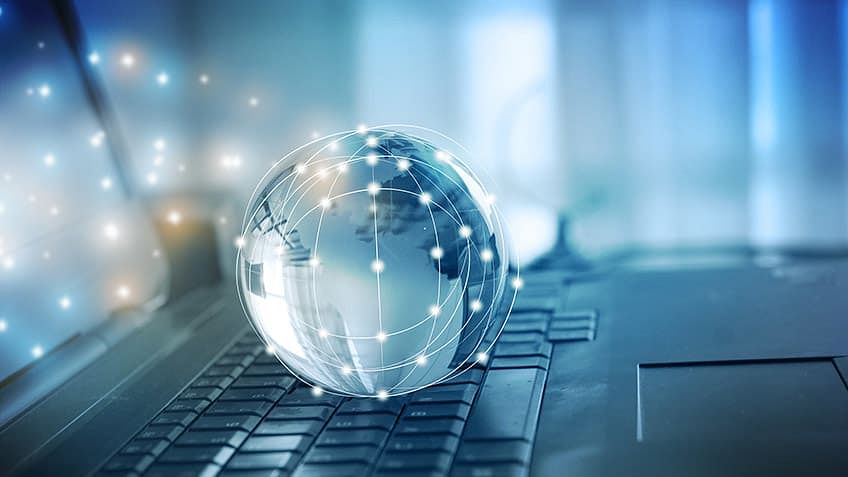 The Internet dominates much of our lives, so much that it's easy to take it for granted. But, over the years, it's become just another part of our everyday existence, something we accept as quickly as paying our electric or water bill or driving a car.

But how much do you know about the Internet's fundamentals? It's time to engage in a refresher about what the Internet is, how it works, what it's used for, and a lot more. It's also an excellent opportunity for all those Internet latecomers to be brought up to speed on the basics.

Become a certified expert in Azure and AWSEnroll Now

What Is the Internet?

The Internet, sometimes called "the Net," for short, is a global network consisting of many networks which allow a user with a computer or similar device to interact with other computers. It's an autonomous, public, cooperative medium that's routinely accessed by millions of users to collect information, conduct transactions, or communicate with each other.

The Internet connects millions of computers, mobile devices, servers, and websites around the world, letting users send and receive all manner of files (audio, text, video, image) and access resources such as apps and cloud services.

How the Internet Works

To function, the Internet relies on our existing public telecommunication networks. The Internet consists of two major parts: the network protocols and the hardware. The hardware is the easy part; it includes smartphones, computers, or whatever other device users employ to access the Internet, all categorized as clients or endpoints.

Hardware also includes the devices used to store and process the information, known as servers, which hold the websites we visit. Furthermore, hardware covers the transmission lines and other technology used to link everything together, such as cell phone towers, satellites, fiber optics or cables, and routers.

The other part of the Internet, the protocols, covers Transmission Control Protocol/Internet Protocol (TCP/IP), a suite of protocols that allow devices to communicate with each other. These servers are connected to the Internet by an Internet Service Provider, or ISP, and identified by a unique IP address. Each website has an easily remembered domain name, replacing the string of incomprehensible alphanumeric characters of the ISP string.

After acquiring the IP address, the server searches for the domain name's IP address in a massive information directory known as a DNS server (Domain Name Server). Once the browser has the IP address, it passes on any requests to the correct server, which in turn processes the request and displays the website content the user's looking for.

This process of transferring information between devices relies on packet switching. First, each computer connected to the Internet is given a unique IP address for identification purposes. Then, when one device wants to "talk" to another device, the data is transmitted over the Internet as a packet. Each packet has a port number assigned to it that connects it to the endpoint.

Build and Deploy Azure Applications Like a Pro!Enroll Now

A packet with a unique IP address and port number can then be translated from a text form into electronic signals and travels through the layers of an Open Systems Interconnection model (OSI model), starting with the top application layer and ending at the physical layer. The message is then sent over the Internet and received by the ISP’s router. The router examines the destination address assigned to each packet and determines where it goes.

The packet eventually reaches the client, then makes the journey through the OSI model but in reverse, losing the IP address and port number so that the data can be translated back into "real words."

What is the Internet: What is an IP Address?

An IP address is a network address assigned to a domain or device that shows the Internet where to send your data. IP addresses are rendered like this: 188.0.2., four octets of numbers ranging from 0 to 255, presented in decimal as opposed to binary form.

The Types of Internets

Here’s a list of the primary kinds of Internet available today:

What is a Network?

In the IT world, a network is defined as a collection of computers, mainframes, servers, devices, peripherals, and other devices that are all connected for purposes of communication and data sharing. For example, the Internet is one huge network composed of many smaller networks, all linked together.

What is the Internet: What is an Internet Protocol?

We’ve tossed around the concept of IP addresses, but we should pause a moment and define “Internet protocol.” It’s defined as the method (otherwise known as a protocol!) by which information is transmitted from one computer to another via the Internet. Protocols include:

So, What’s the Difference Between the World Wide Web and the Internet?

It’s easy to get the terms “Internet” and “World Wide Web” (also just called “the Web”) confused. The Web is the collection of web documents and web pages you can find on the Internet by searching for their URLs. The Internet is the worldwide connection of networks.

Think of the Web as software and the Internet as the hardware that makes it all work.

What is the Internet: What is Internet Security?

Internet security, also known as cybersecurity, is the process of protecting online privacy, data, and the hardware itself from data breaches, hackers, thieves, and other security threats. Internet security practices include:

The Uses of the Internet

The Internet's versatility has contributed significantly to its widespread reliance and popularity. Not only can users communicate instantly with each other via e-mail, instant messaging, IRC, and video conferencing, but the Internet also offers:

Just like any other innovation today, the Internet has wrought changes in our society, although the actual extent is constantly debated. On the one hand, the Internet has increased the likelihood of alienation, isolation, and social withdrawal. This type of insular behavior can foster ignorance, prejudice, and the tendency to get swept up in conspiracies or other wild ideas.

On the other hand, the Internet helps bring people together who may otherwise not be able to meet due to geography, physical limitations, or other mitigating factors. The Internet helps like-minded people get organized and be used as a force for positive change.

Additionally, the Internet’s worth shone through during the worst days of the global pandemic, allowing people to keep working, studying, talking, and conducting commerce.

The Advantages and Disadvantages of the Internet

Like any other innovation, the Internet brings good and bad to the table. Here's a collection of pros and cons, and unsurprisingly, some of them touch upon concepts we’ve previously alluded to.

Advantages of the Internet

Disadvantages of the Internet

A Brief History of the Internet

The Internet as we know it was created by the Advanced Research Projects Agency (ARPA) of the United States government in 1969 and was initially known as the ARPANET. The original intent was to devise a network that let researchers and their computers at one university “talk” to the research computers at other universities.

Additionally, ARPANet was designed so that the network would keep functioning if parts of it were lost due to a natural disaster or military attack.

In 1983, ARPANet adopted the TCP/IP open networking protocol suite. Then, in 1985, the National Science Foundation Network (NSFN) improved the network so it could connect university computer science departments nationwide.

The real watershed moment for the Internet came in 1989 when communications over the Internet drastically improved with the advent of the hypertext transfer protocol (HTTP). The HTTP protocol allowed different computer platforms to connect to the same Internet sites, and this was a game-changer, resulting in an explosion of Internet use.

Who knows what’s in store next for the Internet?

Get in on the hottest industry today! Enroll in our Post Graduate Program In Cloud Computing with Caltech!

Do You Want to Become a Cloud Architect?

Cloud computing has taken the Internet to new, exciting levels, adding layers of versatility to an already valuable tool. If you want to become a cloud architect, Simplilearn has the means of teaching you the necessary vital skills.

The Cloud Architect Master’s program helps you build your AWS, Microsoft Azure, and Google Cloud Platform expertise from the ground up. You will learn how to master the architectural principles and services of the top cloud platforms, design and deploy highly scalable, fault-tolerant applications and develop skills to transform yourself into an AWS, Azure cloud and GCP architect.

Glassdoor indicates that cloud architects in the United States may earn a yearly average of $133,462. So, don’t delay. Visit Simplilearn today and get started on your new career as a cloud architect!

What is Internet Protocol Security? Applications and Benefits