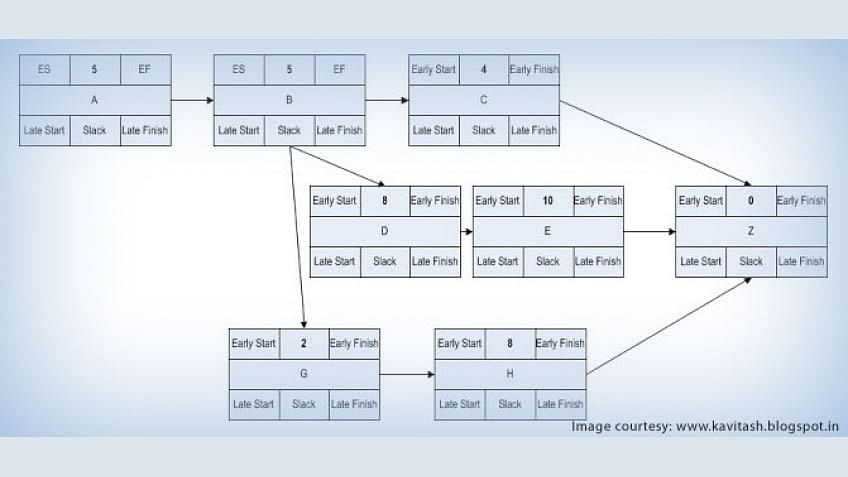 This technique is used to carry out the Schedule Network Analysis. This is again a very popular technique and we will study this method in next few slides, first, let me explain what a critical Path is? It is defined as the longest duration path through a network diagram and determines the shortest time to complete the project.

Float is another concept, which is quite important in understanding the critical path. Float is calculated once the network diagram is ready. There are three kind of float that can be calculated. The first is the Total Float, which denotes the amount of time an activity may be delayed without affecting the schedule of subsequent activities.

The second type of float is Free Float which is the amount of time an activity can be delayed without delaying the early start date of its successor(s) activities.

The last type is Project Float which is the amount of time a Project can be delayed without delaying the externally imposed project completion date required by the customer or previously committed by the Project Manager. You can think of float as a cushion time available to complete an activity. Float is also called slack. Now, let me ask you. What is the slack of the activities on the critical path? The answer is Zero.

There are two ways in which float of an activity can be calculated. But, before that, let me inform you that the first step in critical path method is to identify the Critical Path of the Network. Once the critical path is identified, calculate the start date and end date of each of the activities on the critical path.

As we have seen earlier, the float of the activities on the critical path is zero so they represent the overall project duration. Now that you know the Project duration, you can either go through the network starting with time zero and keep on calculating the time required to complete each activity till you reach the last activity of the Project. This is also called Forward pass. The starting time for each activity in this approach is called 'Early Start' and end time for each activity is called 'Early Finish'.

The critical path of the Project is Start, 1, 2, 4, 5, End. Take some time to calculate all the four values, i.e. Early Start, Early Finish, Late start and late finish of the activities. I have written down the values for your verification.

Let me take Activity 3 as an example.

What is Critical Chain Project Management?