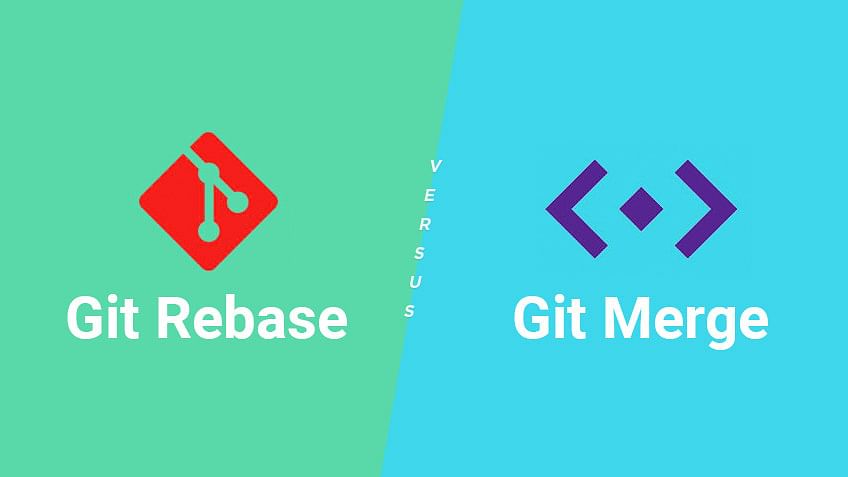 Git is an open-source version control system many developers rely on for source code management. It has many features that can make life easier for DevOps practitioners. Today we’re talking about two specific commands: Git rebase and Git merge.

Let’s kick things off with some basic definitions.

The programmer needs to perform a merge, which brings us to our original point: the difference between a Git rebase, and a Git merge.

What Is Git Rebase?

Git rebase is a command that lets users integrate changes from one branch to another, and the logs are modified once the action is complete. Git rebase was developed to overcome merging’s shortcomings, specifically regarding logs.

What Is Git Merge?

Git merge is a command that allows developers to merge Git branches while the logs of commits on branches remain intact.

The merge wording can be confusing because we have two methods of merging branches, and one of those ways is actually called “merge,” even though both procedures do essentially the same thing.

In summary, here’s an image that shows an initial branch, a Git rebase, and a Git merge.

The Workings of Git Rebase and Merge

Git rebase takes all the changes, and compresses them into a single patch and integrates this new patch onto the target branch. Then, it moves the completed work from one branch to another, typically the master branch. In the process, rebase flattens the history, removing unwanted entries.

Git merge, on the other hand, only changes the target branch and creates a commit, preserving the history of the source branch.

Both the rebase and merge commands exist for the same reason: they combine the work of multiple developers into a single entity, integrating changes between branches. That about sums up their similarities. On the other hand, their differences are considerably more profound.

What’s the Difference Between Merge and Rebase?

A head-to-head comparison chart is the best way to illustrate the differences between Git merge and Git rebase.

The Advantages and Disadvantages of Git Rebase and Git Merge

Each merge process brings plusses and minuses to the table.

Your branching strategy must factor in the roles, goals, and shape of your organization. After all, Git merge and Git rebase are viable merging strategies (more on that later). In addition, you must consider factors such as your organization/team's Git competence and level of rebase.

What matters more to your team? Is it the simplicity of rebasing or the history and traceability of merging? An effective merging strategy relies on comparing team needs against available resources.

How Do You Use Git Rebase and Git Merge Together?

Put another way; you can use Git rebase to work on a private branch, then do Git merge to bring everything together into one coherent timeline.

Git reset is a powerful command that undoes changes, moving the repository back to a previous commit, and eliminating any changes made after the commit. It’s literally hitting the “reset” button, undoing local changes.

What’s the Difference Between Squash and Merge, and Rebase and Merge?

A squash and merge works best when you have too many commits on a single feature, and not all are useful anymore, so you combine them onto the master as a single commit. This approach is different from a rebase and merge, where you take a feature branch and attach it to the master.

Thus, the squash and merge keep the changes but removes the individual commits from the history. The rebase and merge move the entire branch and rewrites the history to reflect this.

Rebase vs. Merge. Which is Better?

Like so many other head-to-head comparisons of products, services, and strategies, the answer depends on your specific situation and needs. For example, both Git rebase and Git merge are good merging strategies, but each shine in a different way and under other circumstances.

If you’re working either on a small team or by yourself, Git rebase is a better choice. However, if you're working in a big group, you want to use Git merge.

The choice boils down to how transparent and accessible you want the logs to be.

Looking at a Git Rebase Example

This illustration, provided by Gcapes.github, shows a good example of a Git rebase.

A Git rebase is just another way of saying, “Please add my changes to the work that has already been done.”

The Caltech Coding Bootcamp, held in partnership with Caltech’s Center for Technology and Management Education, can teach you how to code and become a full-stack developer in just six months.

This bootcamp helps you master both front-end and back-end Java technologies, beginning with the basics and moving up to the advanced aspects of full-stack web development. In this bootcamp, you will learn Angular, Spring Boot, web services, JSPs, MongoDB, and much more.

According to Indeed, a full-stack developer in the United States can earn an average of $101,930. In India, a professional in a similar position can make an annual average of ₹771,762.

Visit Simplilearn today and unleash your full potential as a professional coder and developer!

What Is Git Rebase, and How Do You Use It?