Career Masterclass: How to Start Your Project Management Career in Six Months 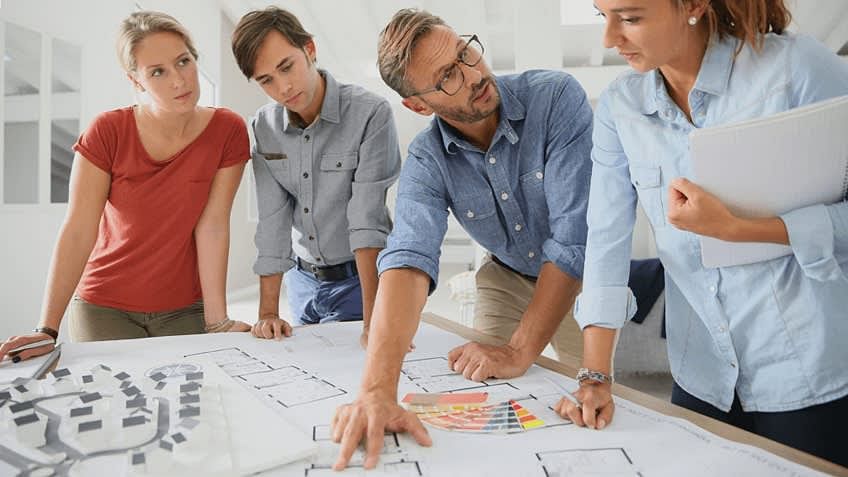 To be successful in the field of project management, the ability to estimate the cost of a project is vital. If you’re a project manager who’s been thrown in at the deep end and are struggling to come up with accurate, realistic estimates, it helps to fully understand two of the most important estimate metrics that you could start applying to your projects right away: Rough Order of Magnitude and Definitive.

The way the costs are estimated is different in both methods, and it is important for any project management professional to understand how both these estimations work. Depending on the method used, a company will have more or less tolerance for variation from the estimate.

Let’s take a deeper look into these two techniques.

What is a Rough Order of Magnitude (Rom) Estimate?

Rough order of magnitude estimates, also known as ROMs, are estimates of the effort and cost involved in completing a project. The ROM estimation process occurs early in the project life cycle and serves as a guide in the selection of strategies and planning options.

Rough order of magnitude estimations is general estimates of the effort and cost associated with a project. The method is typically used for estimating project budgets without much detail. Usually, this step is carried out when selecting and approving a project.

A Rough Order of Magnitude (ROM) estimate is generally completed in one of the first phases of a project. In general, when a company or business wants a ROM cost completed, they are looking for a ballpark number instead of an exact figure.

How Do I Prepare a ROM Estimate?

Although there is a more accepted variation with a Rough Order of Magnitude estimate, it is still vital that a project management professional complete the work to make the estimate as accurate as possible. There are limits to what is acceptable in regard to the price variation.

Often, projects are completed over a period of several years. It can difficult to forecast and plot the cost of raw materials or labor over a multi-year time frame. However, there are known inputs that the project manager is sure to get correct. As a general rule, the longer the time horizon for the project, the more the possible variation in the final price.

For example, if someone estimated the construction of a new house to be $200,000 and the final cost was $1,000,000, the level of variation would not be acceptable. When preparing cost estimates using this method, the most important aspect is to get the known factors right.

There are several handy tools on the market to help project managers provide likely Rough Order of Magnitude estimates. SEER is an interoperable suite of products that can help project managers with many steps along the way, including software solutions that help with both ROM and Definitive Estimates.

There are also ROM templates like this one from Doctonic that will help map out all variables to take into account.

What is a Definitive Estimate?

A definitive estimate is very different from a ROM estimate. First, the accepted level of variation between projected cost and the final cost is usually -10% to +10%. A company or client that requests a definitive estimate usually has much less room for error than one that will accept Rough Order of Magnitude pricing.

A definitive estimate may also turn out to be incorrect, since it is likely based on quite a few assumptions, including factors beyond anyone’s control. Estimates changing is an accepted fact of life, and the only way to counter uncertainty in estimates is to update them regularly - the more uncertainty, the more frequently they need to be revisited. This is the only way to mitigate the risks. The PMBOK terms this “rolling wave planning.”

How Do I Prepare a Definitive Estimate?

Any direct costs associated with the project, such as building materials and labor for a home, should be itemized. A contingency should also be incorporated into a definitive estimate which can cover a project manager in the event that the market conditions change. To use the home building example, if the price of bricks suddenly goes up by fifty percent it would not be reasonable that the estimated cost of bricks in the home will be the same as the final cost. To help reduce the impact of this situation, indirect costs should also be budgeted into a project.

Many companies offer templates and calculators to assist with definitive estimates. Smartsheet offers a template in addition to a helpful guide on project cost estimation.

How Do I Calculate Variation for These Estimates?

As a project manager, it is important to be able to accurately account for variation. If the estimated cost of a project is $200,000 and the actual cost of the project ends up being $250,000, the dollar variation is $50,000. However, what really matters is the percent variation. In this case, we would take the difference of $50,000 and divide that by the estimated cost of the project at $200,000. In this simple example, the cost variation would be 25%. This would be acceptable for a ROM estimate—but not for a definitive estimate.

Any definitive estimate should have a scope of work and an itemized list of costs that went into the project. Unlike a ROM estimate, a business is not likely to tolerate or accept large variations from the estimated and final costs. Finally, as a project manager, it is important to lay out the expectations of the accuracy of the different estimation methods. A business should understand that a ROM estimate is not going to be nearly as accurate as a definitive one.

If you found this article helpful visit our resources library for more project management articles!

1: How do you calculate ROM estimate?

To calculate ROM estimate, compile a list of tasks that are to be completed. Identify the resources you will need to complete the objective. Estimate tasks and timelines for them. Calculate the cost of the project based on all these things.

2: What is ROM in estimating?

3: What Is the Difference between Definitive Estimate and Rough Order of Magnitude?

4: What’s the purpose of a ROM estimate in project management?

ROM estimate gives a starting point for moving forward with the project. It is used as the base of for the budget.

Check out the video of our course on Introduction To PMP Certification Training.