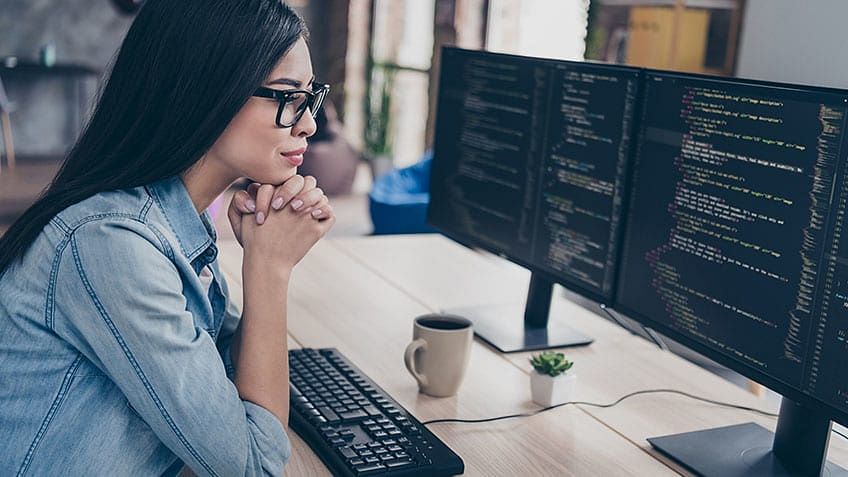 Whether you’re looking to start coding for a new career, a part-time hobby, or just to enhance your current role, the first thing that you need to do is decide on a programming language to start with. One go-to programming language commonly used by developers all over the world is C++. In fact, most video games, embedded systems, IoT devices, or resource-heavy AI applications run on C++. With so many uses of C++, it is recommended as one of the best languages to learn.

C++ is a general-purpose, free-form programming language created by Bjarne Stroustrup in 1979 at Bell Labs in Murray Hill, New Jersey, as an enhancement to the C language. Since it is an extension of C, it is also known as C with classes. It was specifically designed with an orientation towards large systems and resource-constrained software. Since its inception, C++ has expanded significantly over time. The latest version (C++20) has object-oriented, functional, and generic features in addition to low-level memory manipulation. The biggest advantage of C++ is that it is super scalable and allows developers to have a lot of control over how their applications use up resources.

Also Read: Top 7 Practical Applications of C++ and the Way to Build a Career in the Field

C++ (or “C-plus-plus”) is a general-purpose programming and coding language. C++ is used in developing browsers, operating systems, and applications, as well as in-game programming, software engineering, data structures, etc.

Advantages of C++ Over Other Languages

C++ is an object-oriented programming language which means that the main focus is on objects and manipulations around these objects. This makes it much easier to manipulate code, unlike procedural or structured programming which requires a series of computational steps to be carried out.

When speed is a critical metric, C++ is the most preferred choice. The compilation and execution time of a C++ program is much faster than most general-purpose programming languages.

Unlike other programming languages where no compilation is required, every C++ code has to be first compiled to a low-level language and then executed.

The C++ Standard Template Library (STL) has many functions available to help write code quickly. For example, there are STLs for various containers like hash tables, maps, sets, etc.

C++ also supports pointers which are often not available in other programming languages.

C++ is closer to hardware than most general-purpose programming languages. This makes it very useful in those areas where hardware and software are closely coupled together, and low-level support is needed at the software level.

Uses of C++ (With Real-World Applications)

Almost all the programs and systems that you use or a part of their codebase is written either in C or C++. Be it Windows, a web browser, your favorite game, or a video editing software, the uses of C++ can be found in almost all applications today. Here are some interesting areas where C++ is popularly used.

C++ is a fast and strongly-typed programming language which makes it an ideal choice for developing operating systems. Mac OS X has large amounts written in C++. Most of the software from Microsoft like Windows, Microsoft Office, IDE Visual Studio, and Internet Explorer are also written in C++.

Since C++ is closer to hardware, game development companies use it as their primary choice to develop gaming systems. It can easily manipulate resources and can override the complexities of 3D games and multiplayer networking.

C++ is also used to develop GUI-based and desktop applications. Most of the applications from Adobe such as Photoshop, Illustrator, etc. are developed using C++.

Web browsers need to be fast in execution as people do not like to wait for their web pages to be loaded. This is why most browsers are developed in C++ for rendering purposes. Mozilla Firefox is completely developed from C++. Google applications like Chrome and Google File System are partly written in C++.

Various embedded systems that require the program to be closer to hardware such as smartwatches, medical equipment systems, etc., are developed in C++. It can provide a lot of low-level function calls, unlike other high-level programming languages.

The compilers of many programming languages are developed in C and C++. This is because they are relatively lower-level when compared to other higher-level languages and are closer to the hardware.

C++ is also used to write database management software. The world’s most popular open-source database, MySQL, is written in C++.

Cloud storage systems that are used extensively need to work closer to the hardware. This makes C++ the default choice for implementing cloud storage systems. These systems also require multithreading support to build concurrent applications that support load tolerance, which C++ provides. Bloomberg is a distributed RDBMS application that is primarily written in C, but its development environment and set of libraries are all written with C++.

Because C++ is one of the fastest programming languages, it is widely used for programming routers, telephone switches, and space probes.

As you can see, the possibilities and uses of C++ are limitless. Even if you have never coded in C++ before, you have indirectly used it while running an application because most of them are written in it. If you want to learn more about C++ and other top programming languages out there, you can sign up for Simplilearn’s Post Graduate Program in Full Stack Web Development. This course has been created in collaboration with Caltech CTME and will help you master both front-end and back-end technologies needed for software development. Get started today and upgrade your career as a software developer

Use of C language