What is Software? Definition, Types, and Examples 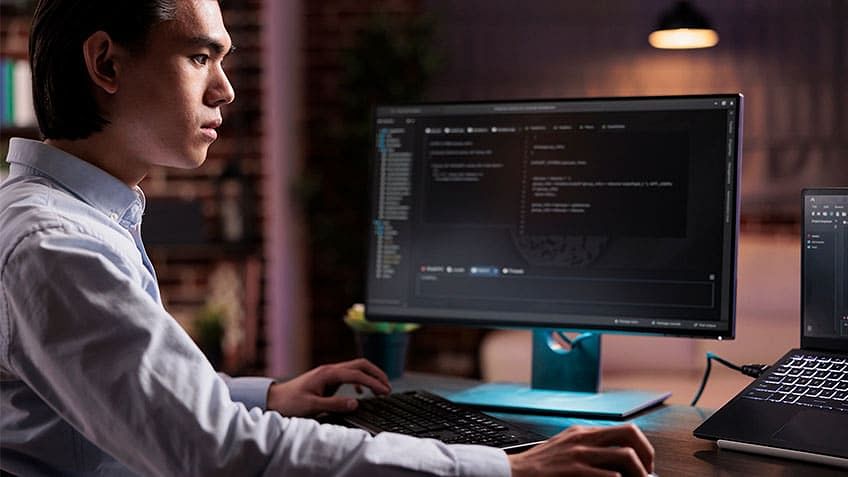 The software can be best defined as a set of instructions, technically referred to as programs, that perform operations and specific tasks based on the commands of the user. Every single task that a user intends to perform is regulated by software. Made of binary language (ones and zeroes), there is a variety of software for different tasks. With that said, here’s everything about software that you should know.

Examples and Types of Software

There are several types of software based on their functionalities, which are as follows-

System software allows the user to run computer software or hardware and is responsible for managing their interaction with each other. It perpetually runs in the background to maintain the basic functionalities and the hardware of the computer. It essentially acts as a mediator between the computer and the user to facilitate operations. System software is of four types, which are as follows-

Application software or application programs are end-user programs that serve specific functionality to help users accomplish certain tasks. This includes graphic designing, researching online, drafting documents, watching movies or playing games, and managing finance among others. Developers keep creating software applications based on the evolving needs of users. There are various types of application software, which are as follows-

Programs and software are created by coders using different software tools, known as programming software. Some such programs used for software development by coders are as given below-

How Does Software Work?

A software serves the purpose of executing commands provided by the user. These commands, known as inputs, are processed by the software. While the input is given in complex language that humans use, it is first converted into a binary language that the software understands. Based on the input, the software provides output to users. This output depends on the nature of the command given and the functionalities of the software.

How Software is Distributed?

There are different ways in which software can be distributed based on various factors. With that said, here are some common distribution mechanisms for software-

The commercial distribution of software means providing users with a license to use that particular software. Since users don’t completely own the software and are only provided a license, they cannot make any modifications or add features to the software. While the most common type of distribution mechanism in the past, it is less popular in recent times.

Freeware type of software is available to be downloaded from the internet and is completely free of cost. Freeware is commonly adware, which means it comes with embedded advertising to generate revenue, which compensates for the software being free of cost.

Shareware is a variation of software, which is available for download for a limited period of time on a trial basis. It is aimed at offering a realistic experience to users so that they make the decision to buy the full version of the software for an unlimited amount of time, based on their experience with the shareware.

There are several tasks to accomplish when developing software, and project managers use a framework known as the software development lifecycle to describe these tasks. Analysis of the needs of users and planning the software based on this requirement analysis is the first step, followed by coming up with a strategy for fulfilling those requirements.

How to Maintain Software Quality?

Software testing is performed to determine and resolve any technical issues in the source code of the software. It also assesses other aspects, such as security, performance, and usability. To maintain software quality post-development, the developer constantly determines the requirements of users and issues pertaining to its features to make the needed modifications.

Modern software development leverages Lean and Agile principles. The focus of these principles is the requirements of customers for incorporating new functionalities and features into the software. Whether you make changes to small software products or those that are large-scale and complex, these principles are equally applicable to both types.

Software licensing refers to putting a restriction on the usage and distribution of software with the help of a legally binding document known as a software license.

These software licenses, without any copyright violation, give users the rights to one or multiple copies of software. They highlight the basic responsibilities of the concerned parties to an agreement, and also put restrictions on the ways software can be utilized.

The terms and conditions of a software license typically involve the fair use policy of the software, limitations of liability, guarantees and warranties, disclaimers, and protections in case of infringement of the intellectual property rights of others because of the software or its usage.

Even though software infringements can be prevented with the help of copyright laws, these do not completely prevent others from independently developing similar software without copying. Patents, on the other hand, stop a person from making use of the functional aspects of software claimed by a software developer in that patent.

Up until the late 1950s, the term software had not been used. Even though different software was being developed during this period, they had not been made available to people commercially. As a result of this, users, which included mostly scientists and big enterprises, often resorted to developing their own software.

Here is a brief timeline of the history of software-

It is crucial to have a good understanding of software, its types, how it works, and other aspects pertaining to it for developers and other experts who maintain software. While hardware is extremely important, the software of a system is designed to execute commands and provide users with output. Without software, it is virtually impossible to use your system.

If you are looking to enhance your software development skills, we would highly recommend you check Simplilearn’s Post Graduate Program in Full Stack Web Development. This course, designed in collaboration with Caltech CTME, can help you hone the relevant skills and make you job-ready.

If you have any questions or queries, feel free to post them in the comments section below. Our team will review and get back to you at the earliest.

What Is Application Software? (With Examples)