HomeResourcesAI & Machine LearningAutonomous Delivery: An Evolving Industry you Should Know About

What Is Sentient AI and Is It Already Here?

How to Use AI in Hiring to Eliminate Bias

Autonomous Delivery: An Evolving Industry you Should Know About 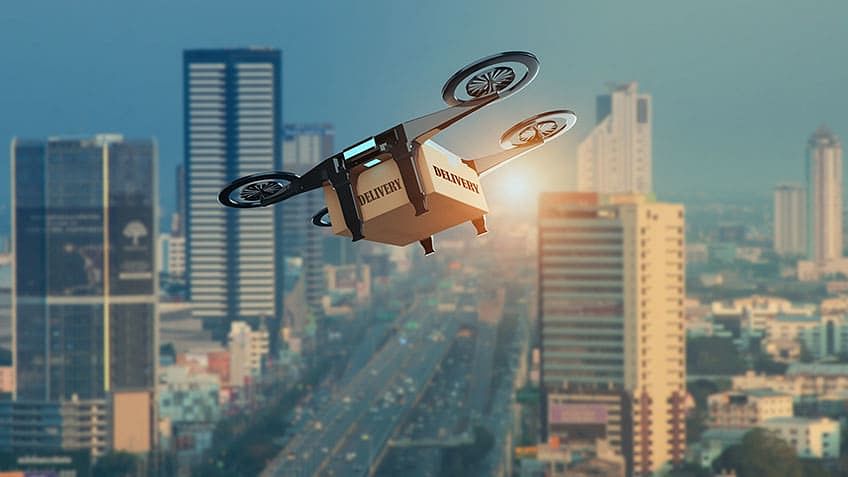 Delivery is going autonomous. Technological advances are multiplying to help businesses deliver food, groceries, and other products — services that were vital during the Covid-19 pandemic.

The next stage in delivery technology will eliminate the need for human delivery operators. The delivery mechanisms range from drones carrying a kilogram of medicines to cargo ships carrying thousands of tons of trade goods.

The basics of getting a product from A to B is nothing new. The friendly milkman was a neighborhood fixture in communities for generations, and many apartments used to have passages to allow delivery workers to leave groceries securely by the back door by the kitchen. Let’s not forget the enduring postal workers making their daily deliveries to homes and businesses. However, it’s the technologies surrounding delivery services that are transforming the industry.

Ridesharing services such as Uber and Lyft, which rely on smartphones and websites, have gone beyond competing with taxis and town cars, creating a new resource of available drivers. At the same time, entrepreneurs started companies such as Doordash and GrubHub to serve restaurants with independent delivery services. Sometimes the two overlapped, as when Uber created UberEats to offer its drivers additional work. In India, even the traditional dabbawalas, who deliver tiffins from homes to workplaces in Mumbai, now use websites and SMS to help improve their businesses.

Quantzig, an analytics and business intelligence firm, asserts in a TechHQ article that leading online food delivery players are using AI and ML to redesign workflows and improve operations. In addition, AI and ML help companies more efficiently plan their delivery routes and forecast demand. Quantzig said that AI and ML could play a valuable role in predicting food trends, helping online food delivery companies to identify and capitalize on the new flavors and changing popular tastes preferred by their consumers.

The Next Step: Autonomous Delivery

Just as delivery services like Doordash and GrubHub reduce labor costs by letting restaurants share the cost of delivery drivers, autonomous vehicle technology can reduce the labor cost of delivery even further. A significant advantage of autonomous vehicles is their entire carrying capacity and interior space are devoted to the goods they deliver. Passenger vehicles are designed around the comfort, safety, and entertainment of the occupants.

TechCrunch reported last December that autonomous delivery startup Nuro is poised to begin commercial deliveries this year in California. The company was founded by Google alums Dave Ferguson and Jiajun Zhu in 2016. The autonomous Toyota Prius vehicles can only travel 25 mph. The company plans to use its autonomous Toyota Prius vehicles in one city with one partner and then add more partners and expand its service area. Nuro has attracted partnerships with Walmart, Kroger, CVS, and Chipotle, along with over $1 billion in funding since 2017.

In Austin, Texas, Refraction AI’s REV-1 robots just started making downtown pizza deliveries. The Austin Eater reported that the small REV-1 robots travel in bike lanes but could use sidewalks and streets if necessary. The REV-1 will yield the right of way to traffic, bicycles, and pedestrians. During the pilot phase, each autonomous delivery robot will be accompanied by a person on a scooter and remote people will watch over the deliveries. The vehicles only travel 15 miles per hour and have the carrying capacity of six grocery bags. There are 10 robots in the Austin program, but more will be added when more restaurants, shops, and groceries join the service.

India is testing drone deliveries of medicine in Gauribidanur. Bengaluru’s Throttle Aerospace Systems (TAS) is conducting a 30-45 day trial of the beyond visual line of sight (BVLOS) deliveries. According to The Economic Times, cardiac surgeon Dr. Devi Shetty is backing the trials, and Narayana Health will provide the medicines to be used for transport. The consortium will use two variants of its drone — MedCOPTER and TAS’ on-demand autonomous delivery software called RANDINT — during the experiment.

Amazon plans to get heavily into drone deliveries with its Amazon Prime Air service. This future delivery system is designed to get packages to customers in 30 minutes or less. It is undergoing testing in Cambridgeshire, England. GPS guides the drones, which carry packages up to five pounds.

Recent technology advances have tech leaders and financiers speculating that self-driving trucks will be a common sight in the next 10 years. Flock Freight reports that trucking companies are testing semi-automated trucks (which use a driver for some functions) and fully autonomous trucks (which don’t require a driver). The article asserts that autonomous trucks can reduce fatigue and accidents, and markedly improve productivity. Then there are the cost savings: implementing self-driving semi-trucks would cut labor, insurance, and fuel-consumption costs.

As for labor concerns, the article shares that some industry leaders predict that self-driving semi-trucks would mitigate a driver shortage rather than replace drivers at first. Also, autonomous trucks would supplement the drivers’ work as human drivers will need to be in control to navigate tricky routes and bad weather.

TuSimple plans to hit the road much sooner. The Wall Street Journal reported that the autonomous trucking firm has hundreds of millions of dollars in financing from Chinese investors and U.S. freight-hauling companies. It is testing a fleet of 50 trucks in the American Southwest and another 20 or so in China, running with two people in the cab. TuSimple said its technology would be commercially ready in 2024.

Move Your Career in a New Direction

Clearly, the world is changing, and it’s presenting an opportunity for people willing to change along with it. Workers can gain the needed skills and certification in AI and ML by enrolling in Simplilearn’s Post Graduate Program in AI and Machine Learning, offered in partnership with Purdue and collaboration with IBM. The live, interactive online courses cover statistics, machine learning, deep learning, natural language processing (NLP), and reinforcement learning. This program is provided through our interactive, applied learning model with live sessions by global practitioners, labs, and real-world industry projects.

This is one opportunity that just knocked on your door, so act today.