Calculate the Estimate at Completion (EAC) in Different Ways

What is Management Decision Making and its Types? [ Explained with Examples] 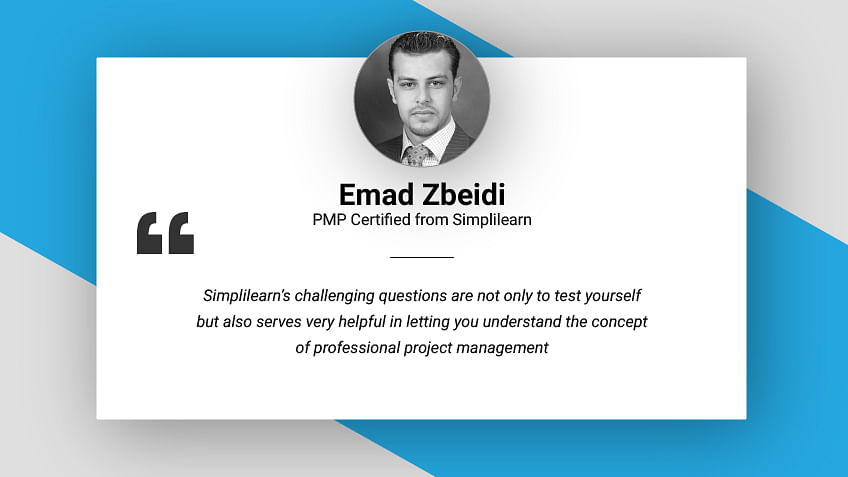 Simplilearn is glad to announce that Mr. Emad Zbeidi from Alberta, Canada has recently cleared PMP® exam achieving a PMI® PMP® Credential. Mr. Zbeidi works as a Procurement Manager at Salam Mall, one of the largest projects of IBDAA investment at Calgary in Alberta, Canada.

We had an opportunity to engage in an e-mail conversation with Mr. Zbeidi on his journey towards achieving a PMP® certification. Here’s the transcript of the e-mail interview on his success story of achieving a PMP® Credential. We thank Mr. Zbeidi for answering our questions.

2.    How many hours of preparation did you put in daily?

I used to dedicate 2-3 hours a day and 4 days a week towards my PMP® exam preparation.

3.    Which were your main focus areas for the preparation?

In the general scheme, I focused on all the processes of Project Management; however, Integration was my main focus area.

4.    How did Simplilearn help you in achieving your certification goals?

5.    What matters more – experience, knowledge, or both with the right credential/s?

Both experienced and knowledge are of great importance; however, if your experience is only with small non-projectized organizations, then you need to focus majorly on the knowledge aspects.

6.    Can you suggest topics to concentrate on PMP® aspirants to attain sure success in PMP® Exam?

I would suggest PMP® aspirants read the PMBOK® at least once before they enroll in a classroom or online course, even though they might not understand most of the content. After enrollment with PMP® Certification training course, they can start studying Rita Mulcahy PMP® Exam Prep to attain proficiency with the five processes of Project Management.

7.    What worked well for you in the actual Exam? Which were your proficient areas?

I will answer this question by presenting my report of PMP® exam. My report was -

I expected to do better on the Initiating and closing process groups.

8.    Having achieved one goal, what’s next on the learning front this year?

My field is in construction and therefore after clearing the PMP® exam and attaining a PMP® Certification, I am looking forward to taking the PMI®-RMP Certification and PMI®-SP Scheduling Professional certification.

9.    What advice do you have for our PMP® certification aspirants?

I took 2 months to find my final self-study way for PMP® exam; therefore don’t worry if you are not very confident at the beginning of your journey as long as you have the PMBOK® Guide. Think big as you do in the project you are managing. It is the perfect time to prove your planning skills and time management by attaining a PMP® certification. So be ready to go over the PMBOK® 3 times, Rita 2 times and attempt PMP® mock exams before taking up PMP® exam.

PMBOK®, PMP®, and PMI® are registered trademarks of the Project Management Institute, Inc.

Chandana is working as a Senior Content Writer in Simplilearn.com and handles variety of creative writing jobs. She has done M.A. in English Literature from Gauhati University. A PRINCE2 Foundation certified, she has a unique and refreshing style of writing.