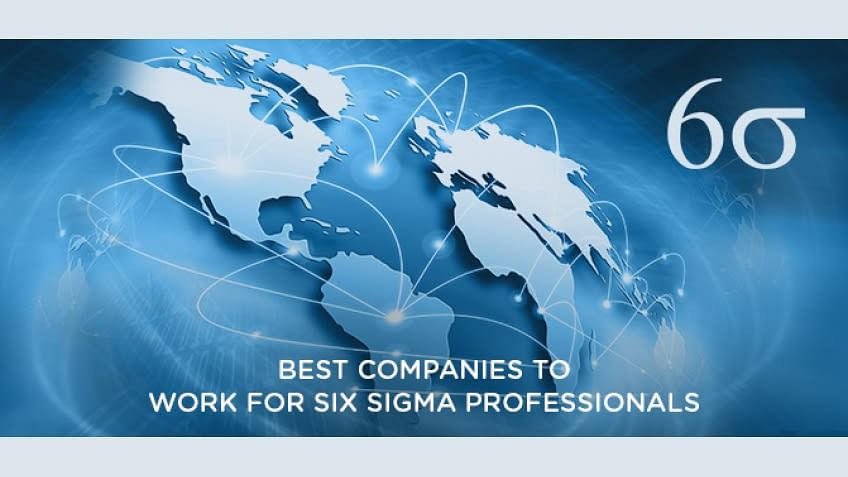 So you’ve now got a Six Sigma credential under your belt, and are looking for a great place to work at and put all that training to good use? Or perhaps you’re a quality management professional, on the lookout for greener pastures.

Finding a company that is the right fit for your needs and values your contributions is a decision that requires a great deal of thought and research. But worry not! This article offers a brief overview of the best companies to work at, for Six Sigma professionals –read on to find out more!

Top of the list is ‘EMC Corporations', an American Multinational Company, headquartered in Hopkinton, Massachusetts, United States, and with branches all over the world. With over 60,000 employees, EMC Corp specializes in data storage, information security, virtualization, analytics, cloud computing and other products and services which enable businesses to store, manage, protect and analyze data.

They have received a number of awards, including ‘World's Most Admired Computer Companies', ‘Top 100 Global Innovators' and ‘Best Multinational Workplaces', in 2012 and 2013.

In the fall of 2002, EMC was introduced to the wonders of Six Sigma by Lee Pollack, resulting in the creation of their initiative ‘Total Customer Experience’ or TCE, an operational philosophy that is centred around the principles of Six Sigma. Today, Six Sigma is completely integrated into the company and has been instrumental in its success.

The TCE team leverages its Lean Six Sigma group to identify the opportunities and scope for improvements across all the sectors of EMC. These are prioritized to drive continual improvement on EMC's product quality, time to resolution, cost efficiencies, and overall process improvement. By the end of December 2013, EMC completed more than 2,400 Lean Six Sigma projects, exceeding $800 million in total, measurable benefits. Along with a healthy and exciting work environment, they offer a good package as well.

McKesson Corporation is another American company dealing with the distribution of pharmaceuticals at a retail sale level and providing IT infrastructure for healthcare, medical supplies, and care management tools. Based in San Francisco, USA, McKesson Corp is a Fortune Global 500 Company and is the 11th highest revenue generating company in the US.

McKesson’s products were among the earliest in healthcare to adopt the Six Sigma methodology. Implementing the Six Sigma discipline, the company has achieved excellent results. Six Sigma helped transform the company from being function-oriented to process oriented as well as helping the organization record more than $100 million in internal savings, improved customer experience and service capabilities and gaining both competitive and cost advantage over the other companies. In a nutshell: Six Sigma has helped their business attain operational excellence.

Nathan Mott, VP of Business Process, McKesson, proudly states, " What Six Sigma has done for our employees is to give them a voice in how to make the business better and a chance to step back and really help improve the company." He also goes on to say that the package they have put together for the employees explains why they should work for the company and how it will benefit them.

The package puts the spotlight on McKesson’s "crossroad opportunities within process improvement" – a career path that is designed for Six Sigma and focuses on the job opportunities, experience requirements and the training and the mentoring that the company provides.

In 2010, McKesson Corp was also named to iSixSigma list of "Best places to work for Six Sigma Professionals".

Rio Tinto Alcan is a subsidiary of the company Rio Tinto, which is a British-Australian mining giant. Operating out of Montreal, the company was created in 2007, as a result of the merger between Rio Tinto PLC’s Canadian subsidiary, Rio Tinto Canada Holding Inc, and the Canadian Company Alcan Inc.

The programme was then enhanced by Lean Manufacturing techniques that boost the capacity for workplace based business development. In 2010, Rio Tinto was another company that was named to iSixSigma list of "Best places to work for Six Sigma Professionals".

Textron executives first learnt of Six Sigma through contacts at the Cessna Aircraft Company, who had been using it as one of their business improvement tools. Quickly adopted organization-wide, Six Sigma become Textron’s preferred approach to improving processes and delighting customers through improved enterprise excellence.

The Textron Six Sigma model is a comprehensive, standardized set of tools and techniques rigorously applied to all operating and functional areas to eliminate waste, reduce variability, and accelerate growth and innovation. Six Sigma is what Textron stands by today, and plays a vital role in making their business stronger. Textron was named to iSixSigma list of "Best places to work for Six Sigma Professionals", in 2010.

Originally, they were using Six Sigma to improve the business performances in the company by eliminating the defects from the manufacturing process, but soon began to apply these methods to staffing and recruiting - becoming the first company to do so.

And Volt’s innovative approach paid off, big time. They currently have 600+ Six Sigma employees focusing on effective process improvement. In 2010, Volt was also named to iSixSigma list of "Best places to work for Six Sigma Professionals".

The company has consistently been placed on the list of Fortune 500 companies. 2003 saw the company begin to use Lean Six Sigma tools and methods. This helped deliver measurable improvement to the company, created growth opportunities and maximized the value to customers.

The company has seen great success in using Lean Six Sigma and has successfully executed thousands of projects that have contributed to improvements in customer experience and business results. In 2010, Xerox was another company to be named to iSixSigma list of "Best places to work for Six Sigma Professionals".

Agree with our list? Which companies do you feel Six Sigma professionals enjoy working for, the most? Let us know in the comments!