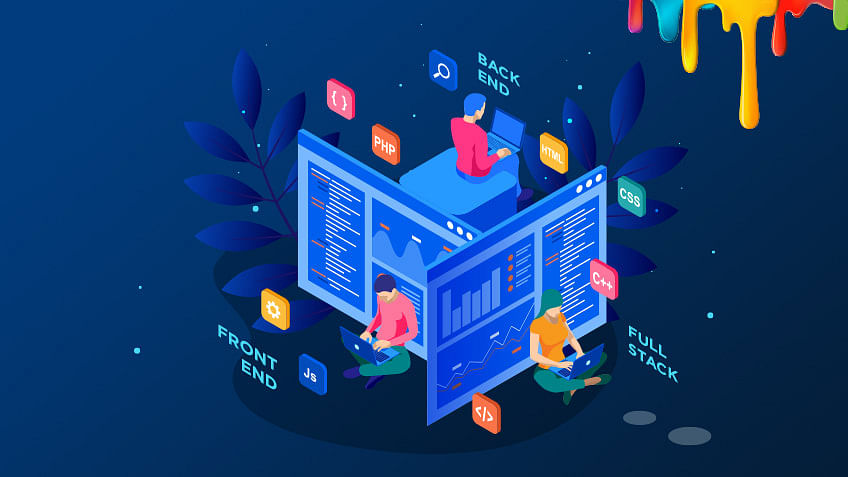 The role of a web developer is one that almost always makes it to the lists of high-paying IT jobs. And why not? In today’s digital world, web developers are indispensable. Whether it's a stunning website, a high-performing e-commerce site, or any other web-based application, it's the handiwork of a web developer.

If you’re aspiring to wear the hat of a web developer, you’d be thrilled to know that full stack developer skills are in high demand. But do you know how full-stack vs. front end vs. back end web development stack up against each other? In other words, what makes these job roles different? We’ll break it down for you.

In this article we will cover the following topics that will give you clear understanding of the differences between front end developer, back end developer and full stack developer:

But first, let’s get a couple of basics out of the way.

What Is Web Development?

A web developer is someone who -

If you’re wondering what exactly they mean, don’t worry. Before learning about frontend vs. backend development, you will look at them separately and understand each of them in detail below in this tutorial.

If what you see in an application is the front end, then what do you think makes this happen? That’s right, it is the backend of the application. Continue reading this tutorial to understand this concept better, and start to learn about frontend vs. backend development.

Who Is a Front End Developer?

Front-end web developers take care of the website’s style and user interface. As you’d probably know, HTML is the structural skeleton of a webpage. You can think of Cascading Style Sheets (CSS) as the physique or the body of the skeleton. CSS enables front-end, web developers, to modify the shape of the physique, which, in terms of websites, is like pre-defining certain sections to make the website display a specific style.

For instance, if the website is a human body, using CSS, you can alter the build of muscles and change the way specific muscles look. Now, with regards to websites, you can use CSS to adjust specific sections of the site to define the look and style it displays. Front-end web developers integrate these "style and look" into a CSS file and include it on top of the HTML file. Whenever they need a particular style, they refer to the CSS file that contains the pre-defined styles.

What Are the Front End Developer skills?

A front end developer skills involve solid knowledge of scripting languages such as HTML, JavaScript, and CSS3. If you wish to become a front-end website developer, you need to master these three languages.

However, by far, the most critical front end developer skill is proficiency in JavaScript. The versatile JavaScript, which works side by side with both CSS and HTML, features in various applications, including the date and time and “Add to Favorites” button.

An average front end developer in the US can make an approx. $104,893 every year.

Surely you clearly understand what frontend and backend of an application means. But what really sets them apart? What constitutes the two? These questions are answered in the next section.

Who Is a Back End Developer?

The user-facing interface of a website needs to be aesthetically pleasing. But, without the software that runs in the background, the website's UI wouldn't even exist in the first place. That’s something that puts back end developer skills to test. Back end developers work on the server-side.

What Are Back End Developer skills?

The programming languages that back end developers typically need to know include PHP, Ruby, Python, and .Net to build applications. Plus, they should have good command over database technologies like Oracle, Microsoft SQL Server, and MySQL.

Since the developer community widely embraces PHP, let’s take that as an example. A scripting language, PHP, works together with Structured Query Language, or SQL, which is the database from where PHP pulls information out to enter it into an HTML file for display. You can find examples of this process everywhere.

For instance, when a user registers on a website, the SQL database stores the submitted information. Every time they log in, the server-side language gets the information from the database, and HTML displays it on your screen. It’s the job of a back end developer to set this process in motion.

Wondering what’s the salary package of back end web developers? Compared to front end developers, they generally get a higher annual salary, which may fall within $128,880 per annum.

Client Side Vs Server Side

Front End Developer or Client Side

Back End Developer or Server Side

The section of a programme that the user cannot see is referred to as the back end. Back end developers concentrate on the site's functionality, building servers, using databases, and utilizing APIs (Application Programming Interfaces).

For instance, a form's layout and content might be prepared on the client end, but when users submit their data, the server side handles the processing.

There are several parameters to consider when differentiating between frontend and backend. Let’s dissect them one by one.

These are some of the points to note when learning about frontend vs. backend development. However, it is also vital for a backend developer to have a basic understanding of frontend and vice versa.

The following list includes some of the front end development technologies:

The following are the frameworks and libraries used in front-end development:

Technologies Used For Back End Development

The following list includes some of the front end development technologies:

The following are the frameworks and libraries:

What Is Full Stack Development?

Who Is a Full-Stack Developer?

A full-stack developer can be best explained as the “jack of all trades.” They are skilled in both front end and back end languages and can work with multiple frameworks.

Skills and Tools You Need as a Full Stack Web Developer

Let's examine the technology and tools you will need to master in order to qualify as a full stack developer.

Given their versatility and broad knowledge spectrum, full-stack web developers are sought-after professionals. The annual paycheck of an average full stack developer can fall within the $112,788 range but can go as high as $150,000 depending on their skillset and experience.

Full-stack developers command the higher salary package than front end or back end developers. Employers are willing to pay more for a full stack developer because it makes more business sense to hire an individual with front and back end skills, rather than getting two people to do the same job.

Therefore, for aspirants who are planning to carve a career in the tech industry, the role of a full stack developer is a lucrative option.

The front end would include everything you notice on the page. The front end developer is responsible for creating all of the icons, text, colors, design and structure.

Login details and other such items are all managed by the back end. Back end development is at work in all of the registration procedures and user data.

Back-End vs. Front-End vs. Full-Stack Development

1. Who gets paid more, front-end or backend?

Backend engineers are compensated more. It is a cultural bias in software development that the front-end or "gui" is what "graphic artists" construct, whereas the back-end is where all the complex computer science theory must take place and should never be questioned.

2. Which is better: backend or frontend?

It is determined by your area of interest and level of specialization. If you're interested in design, the front end would be ideal. The back end would be better if you are strong at logical thinking, API, and server management.

3. Is frontend a good career?

4. Is backend a good career?

A job in back end development is a good choice for folks who enjoy programming and are enthusiastic about technology. You'll be determining what educational path you want to follow as you decide what employment path you want to take.

5. What is the highest pay for a Front End Developer?

6. What is the lowest pay for a Front End Developer?

7. How much does a Front End Developer make in India?

8. How much does a Front End Developer make in the USA?

9. What is the starting salary for a Backend Developer in India?

Backend Developer salaries in India range from 2.0 Lakhs to 19.6 Lakhs per year, with an average yearly pay of 5.5 Lakhs.

10. What is the starting salary for a Backend Developer in the USA?

In the United States, the average annual salary for an Entry Level backend Developer is $89,905.

The demand for skilled full-stack developers is at an all-time high and shows no sign of slowing down. Over the next ten years, job opportunities for web developers will grow by 13 percent — that’s much faster than average for any other profession. Plus, with millions of websites adding every year to the 1.5+ billion sites existing globally, more web developers are needed to build them. There is no job shortage for web developers for sure. So, it’s not hard to see why web development is a popular career choice.

While web developers are getting good salaries and being viewed as valuable assets, they need to be on their toes, always learning and adapting to new trends and technologies. If you want to be part of a fast-moving career, being a full-stack developer can be a rewarding experience for you. An online full-stack developer course will set you on the right track, and fortunately, you can start learning the strands of full stack development easily and effectively right now. So, what’s the wait for?