HomeResourcesAI & Machine LearningThe Future of Robotics: How Robots Will Transform Our Lives

The Future of Robotics: How Robots Will Transform Our Lives 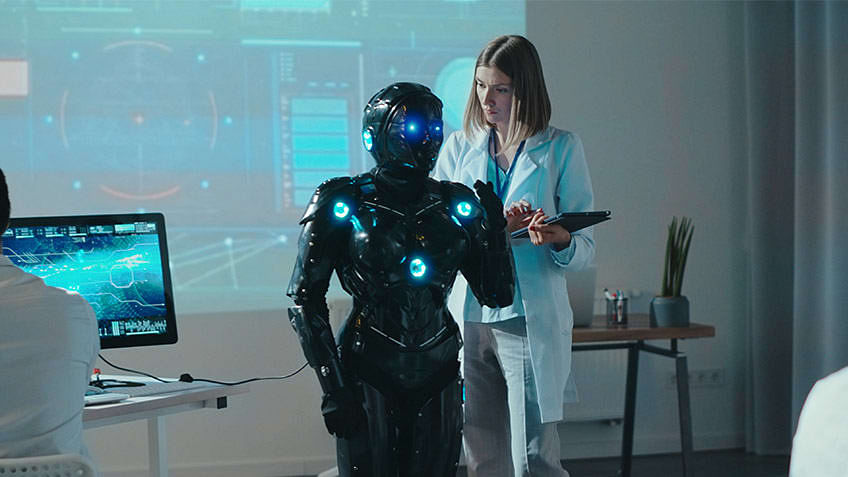 What comes to mind when you hear the word “robot”? Do you picture a metallic humanoid in a spaceship in the distant future? Perhaps you imagine a dystopian future where humanity is enslaved by its robot overlords. Or maybe you think of an automobile assembly line with robot-like machines putting cars together.

Whatever you think, one thing is sure: robots are here to stay. Fortunately, it seems likely that robots will be more about doing repetitive or dangerous tasks than seizing supreme executive power. Let’s look at robotics, defining and classifying the term, figuring out the role of Artificial Intelligence in the field, the future of robotics, and how robotics will change our lives.

Robotics is the engineering branch that deals with the conception, design, construction, operation, application, and usage of robots. Digging a little deeper, we see that robots are defined as an automatically operated machine that carries out a series of actions independently and does the work usually accomplished by a human.

Incidentally, robots don’t have to resemble humans, although some do. Look at images of automobile assembly lines for proof. Robots that appear human are typically referred to as “androids.” Although robot designers make their creations appear human so that people feel more at ease around them, it’s not always the case. Some people find robots, especially ones that resemble people, creepy.

Robots are versatile machines, evidenced by their wide variety of forms and functions. Here's a list of a few kinds of robots we see today:

Advantages and Disadvantages of Robots

Like any innovation today, robots have their plusses and negatives. Here’s a breakdown of the good and bad about robots and the future of robotics.

The Future of Robotics: What’s the Use of AI in Robotics?

Artificial Intelligence (AI) increases human-robot interaction, collaboration opportunities, and quality. The industrial sector already has co-bots, which are robots that work alongside humans to perform testing and assembly.

Advances in AI help robots mimic human behavior more closely, which is why they were created in the first place. Robots that act and think more like people can integrate better into the workforce and bring a level of efficiency unmatched by human employees.

Robot designers use Artificial Intelligence to give their creations enhanced capabilities like:

A Word About Robot Software

Software robots are computer programs that perform tasks without human intervention, such as web crawlers or chatbots. These robots are entirely virtual and not considered actual robots since they have no physical characteristics.

This technology shouldn't be confused with robotic software loaded into a robot and determines its programming. However, it's normal to experience overlap between the two entities since, in both cases, the software is helping the entity (robot or computer program) perform its functions independent of human interaction.

The Future of Robotics and Robots

Thanks to improved sensor technology and more remarkable advances in Machine Learning and Artificial Intelligence, robots will keep moving from mere rote machines to collaborators with cognitive functions. These advances, and other associated fields, are enjoying an upwards trajectory, and robotics will significantly benefit from these strides.

We can expect to see more significant numbers of increasingly sophisticated robots incorporated into more areas of life, working with humans. Contrary to dystopian-minded prophets of doom, these improved robots will not replace workers. Industries rise and fall, and some become obsolete in the face of new technologies, bringing new opportunities for employment and education.

That’s the case with robots. Perhaps there will be fewer human workers welding automobile frames, but there will be a greater need for skilled technicians to program, maintain, and repair the machines. In many cases, this means that employees could receive valuable in-house training and upskilling, giving them a set of skills that could apply to robot programming and maintenance and other fields and industries.

The Future of Robotics: How Robots Will Change the World

Robots will increase economic growth and productivity and create new career opportunities for many people worldwide. However, there are still warnings out there about massive job losses, forecasting losses of 20 million manufacturing jobs by 2030, or how 30% of all jobs could be automated by 2030.

But thanks to the consistent levels of precision that robots offer, we can look forward to robots handling more of the burdensome, redundant manual labor tasks, making transportation work more efficiently, improving healthcare, and freeing people to improve themselves. But, of course, time will tell how this all works out.

Are you an AI and Machine Learning enthusiast? If yes, the AI and ML course is a perfect fit for your career growth.

How to Get Started in Robotics

If you want to become part of the robot revolution (revolutionizing how we live and work, not an actual overthrow of humanity), Simplilearn has what you need to get started. TheAI and Machine Learning Bootcamp, delivered in partnership with IBM and Caltech, covers vital robot-related concepts such as statistics, data science with Python, Machine Learning, deep learning, NLP, and reinforcement learning.

The bootcamp covers the latest tools and technologies from the AI ecosystem, featuring masterclasses by Caltech instructors and IBM experts, including hackathons and Ask Me Anything sessions conducted by IBM.

According to Ziprecruiter, AI Engineers in the US can earn a yearly average of $164,769, and Glassdoor reports that similar positions in India pay an annual average of ₹949,364.

Visit Simplilearn today and start an exciting new career with a fantastic future!

Are Robots a Threat to SEO Professionals