7 Types of Artificial Intelligence That You Should Know in 2023

Want an Easy Idea About What Is Augmented Reality? Read This!

Lesson 8 of 12By Kartik Menon 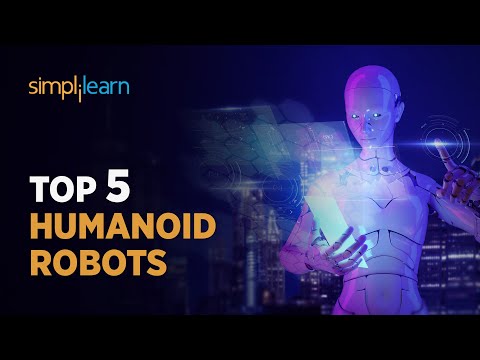 A humanoid robot is similar to a human body in shape. These robots are professional service robots built for interaction with human tools and customer service. These humanoid robots are also used for inspection and maintenance; they have skin and eyes, But they are not made of flesh or bones. The latest iterations can talk like humans, walk like humans, and express a wide range of emotions. In this tutorial, you will explore the top 5 humanoid robots in the world.

Nadine is an empathetic robot that returns greetings, makes eye contact, and remembers all the conversations that have been had with her. She is a human-like robot with personality, mood, and emotions. The face and hands of Nadine are created by a Japanese company Kokoro, similar to her creator, Professor Nadia Thalmann.

This glowing skin and flowing brunette-haired humanoid robot can recognize you from previous visits, make eye contact, shake your hand, continue chatting based on previous meetings, and so on. She has 3D depth cameras, a microphone, and a webcam to gather visual and audio inputs. Then there are various perception layers that process these inputs to recognize different faces, gestures, emotions, and behavior to analyze and respond accordingly.

Nadine is working at AIA Singapore (an insurance company) as a receptionist.

Now moving on to the next robot, which is Geminoid DK.

This robot is a realistic twin of Henry Scharfe of the University of Aalborg. It is the latest iteration of the Geminoid series of ultra-realistic androids. This humanoid robot results from a collaboration between a private Japanese firm and Osaka University, which was supervised by Hiroshi Ishiguro, the director of the university’s Intelligent Robotics Laboratory.

It took nine months to craft the Geminoid DK. Not only his overall appearance was inspired, but his behavior and even the way he shrugs were also fed to the robot, and Scharfe also donated the strands of his own hair to be used in the Geminoid wig. This bot is very realistic as people tend to be mistaken for the person designed to look alike. The main purpose of this creation is to make the humanoid look completely like a human.

Now, moving on to the next humanoid robot.

Junco Chihira is a very realistic android robot created by Toshiba. Junco works full-time in a tourist information center in Tokyo. It is the successor of another Android Aiko Chihira who worked as a receptionist in a department store in Japan. Earlier, Junco Chihira was only able to respond with the scripted pre-set speech, but from 2017 it has gained speech recognition capabilities and can respond to tourists' questions.

Junko Chihira will not only work in the tourism and service industries, but she will also jump into health care for older people. Hitoshi Tokuda, the chief specialist of Toshiba’s research and development center, informed us that it would combine the humanoid with any kind of language processing system.

The next humanoid robot is Jia Jia.

Jia Jia is China’s first humanoid robot. This Chinese humanoid robot puts on a charm in Shanghai; People worldwide admire Jia Jia for her most realistic and alluring appearance.

Jia Jia is created by the University of Science and Technology research team in China. This astounding beauty can hold a normal conversation with a person with microbial facial expression; she does that with the help of speech-generation algorithms and facial recognition technologies. Though her speech patterns are still not smooth, Jia Jia makes it up by looking remarkably human-like.

Jia Jia has such realistic expressions as the special emphasis was given to her “eyes” so that she can catch different gestures, emotions, behavior, and so on. Team leader Chen Xiaoping said proudly that with a little more effort, Jia Jia can see a bright future of her kind.

Now you will look at the next humanoid robot in this list.

Sophia is considered the most advanced humanoid robot. Sophia debuted in 2016, she was one of a kind, and her interaction with people was the most unlikely thing you can ever see in a  machine. She was designed by a Hong Kong-based company Hanson Robotics and was created to look like Audrey Hepburn, a famous Hollywood actress because the creators' goal was to fit her as an old age companion in nursing homes or a crowd manager in events.

Sophia is the world’s first robot citizen and the first robot innovation ambassador for the United Nations development program. The purpose of creating Sophia was to make a robot capable of gaining social skills. Sophia has been embedded with neural networks and artificial intelligence to recognize human faces and understand their gestures and emotions. She can also interact with different people and also respond appropriately.

So these were the top 5 humanoid robots.

Acelerate your career in AI and ML with the AI and Machine Learning Courses with Purdue University collaborated with IBM.

In this tutorial on the Top 5 humanoid robots, you have explored robots like Nadine, Jia Jia, Geminoid DK, etc. These ultra-realistic robots look exactly like humans. Although their behavior still needs more improvement to resemble a human completely, it is clear that rendering social and relational learning to robots is feasible; this may improve in the future with increasing advances in Artificial Intelligence.

You can check the Post Graduate Program in AI and Machine Learning by Simplilearn. It can prove to be the perfect solution to help you build your career in the right direction.

Do you have any questions regarding this 'Top 5 Humanoid robots’ tutorial? If you do, then you can put them in the comments section. We'll help you solve your queries. To learn more about this tutorial, click on the following link: Top 5 Humanoid robots.