HomeResourcesEnterpriseHappy 50th Birthday, Internet. Thanks for Half a Century of Online Learning.

Happy 50th Birthday, Internet. Thanks for Half a Century of Online Learning. 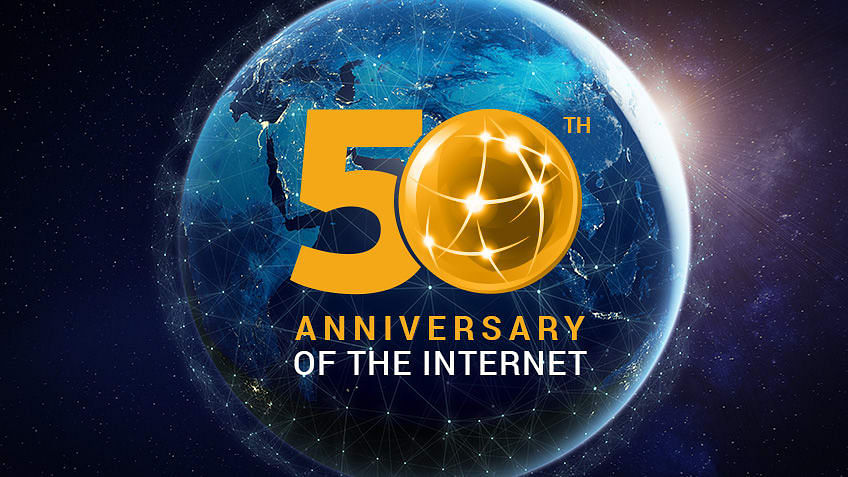 It all began with one word: “Lo.” On October 29, 1969, at 10:30 p.m. PST, Charley Kline, a programming student at UCLA, sent the very first digital message over a network — to another computer 350 miles away at the Stanford Research Institute. Kline actually intended his message to be “Login.” But the system crashed right after he transmitted the first two letters.

Some have joked that this crash was the first online computing lesson ever learned. Although electronic distance learning had been happening in other forms (via the radio, television, and the telephone), the invention of the Internet accelerated and multiplied the power of learning. Today, online training even rivals (and sometimes overtakes) traditional classroom courses.

As we pay tribute to this Silver Anniversary of the ability to get online, we also want to honor the history of the ability to get an online education. Founded a decade ago, Simplilearn is proud to be a substantial part of this elearning tradition. Here’s a chronicle of some of the wayposts of distance learning, the Internet, and Internet-based training.

In the beginning, there was the mail

The concept of distance learning started more than 240 years before the Internet was born. Advertised in the Boston Gazette, the first known correspondence course was for writing shorthand, taught by Caleb Phillips. Lessons and homework were exchanged by mail.

By the early 20th Century, correspondence courses were such a popular way to learn; they became a source and vehicle for fraud (just like the Internet would later suffer). After a strong consumer-protection movement, the United States established the National Home Study Council (NHSC) in 1926, to offer accreditations and help the industry self-regulate.

In the 1920s-30s, experiments to use radio for distance learning failed. As supported by research even today, most people depend on having some visual modality for learning. Then in 1932, Iowa State University experimented with the fledgling novelty of television to broadcast live lessons across campus. The live virtual classroom (LVC) concept was born, and with promising results even then.

By the start of World War II, it was widely reported that “one half of the lawyers and accountants west of the Mississippi received their training through correspondence courses.” In fact, more than 60 million people were enrolled in such programs — more than all other forms of post-secondary education combined. In 1944, even American prisoners of war in Germany, as well as foreign POWs held in camps in the United States, were permitted to enroll in correspondence courses offered by the University of Michigan.

Nearly a decade before the Internet, the University of Illinois connected a system of computer terminals to form a campus-wide Intranet. Students could use these linked terminals to access course content, videos, and recorded lectures. This system soon evolved into a network called PLATO (Programmed Logic for Automatic Teaching Operations), operating on thousands of terminals around the world, including chat rooms and message boards.

The Internet is born!

On October 29th, the first digital communication was transmitted over a long-distance network, from UCLA to Stanford University. Developed by the Department of Defense, this early packet-based network was called the Advanced Research Projects Agency Network (ARPANET), which became the technical foundation of the Internet.

The Open University founded in the UK

Founded in 1969, the Open University (OU) is a public research university (now the largest undergraduate education institution in the UK). With most students based off-campus, in 1971, the OU started using television studios and equipment recently abandoned by the BBC to begin taping and broadcasting lessons throughout London and eventually worldwide.

Creation of the campus-less college

A distance learning pioneer with doctorates in education, psychology, and technology, Bernard Luskin founded Coastline Community College, the first academic institution without a campus, broadcasting most of its classes via television station KOCE in Orange County, CA. He would later found Jones International University, the first accredited, fully web-based university.

On January 1, 1983, the Department of Defense switched ARPANET from using NCP (Network Control Protocol) to TCP/IP protocol, making it a subnet of the public Internet we know today. By 1980, personal computers had begun being used as a tool for distance learning through file sharing and eventually email.

To address the higher education needs of people in the modern workplace, professor and entrepreneur, John Sperling, Ph.D., founded the University of Phoenix in 1976. Then in 1989, the University of Phoenix began offering its courses online over the Internet. The Open University (UK) would follow suit in 1994, making its curriculum accessible over the World Wide Web, a term coined by British Engineer, Tim Berners-Lee in 1989, who wrote a memo to a colleague, describing the Internet as, “a web of notes with links.”

The Sloan Consortium begins surveying students to collect the first ongoing data about online learning. They found that already 1.6 million students (up to 10 percent of higher education students) were enrolled in at least one online course by 2003.

Simplilearn is founded by Krishna Kumar

Recognizing the need to upskill working professionals and to help them get certified and get ahead, Indian entrepreneur Krishna Kumar founded Simplilearn.com, originally as a blog, and then began offering online PMP exam preparation courses for project managers. Meanwhile, online education popularity grows, with 29 percent of higher education students taking at least one course online by 2010.

Online education pulls ahead as the fastest-growing segment of higher education, increasing by 50 percent per year. By this time, 83 percent of CEOs and business owners surveyed believe that online degrees and certifications are as credible as traditional academic credentials. A Babson/College Board study in 2012 found that 77 percent of academic leaders thought online education was equal to or superior to face-to-face classroom instruction.

Online is the new norm

By the end of 2013, 98 percent of colleges and universities offer online learning programs. Outside of traditional academic institutions, online training providers like Simplilearn enjoy unprecedented growth, especially for career-enhancing certifications.

Facing increasing demands to upskill global employees to keep up with emerging technologies,  achieve digital transformation, and maximize ROI, a record number of organizations are turning to online training providers. According to the latest Training Industry Report, spending on outside products and services rose from $7.5 billion to $11 billion.

The popularity of blended learning had doubled year over year. In 2018, 69.3 percent of hours were delivered with blended learning techniques, compared to 34.7 percent the previous year, according to the Training Industry Report. As new research suggests, such as an October, 2019 IDC study, training programs that utilize blended learning — specifically live virtual classroom (LVC) training along with online self-paced videos and projects — improves knowledge transfer by up to 122 percent and cost-effectiveness by up to 50 percent, compared to other training programs, including face-to-face classroom training.

Watch the below video to learn some facts about the internet -

Thanks to the Internet, distance learning has come a long way from the primitive mail (and even email) delivery of centuries past. Today’s online technologies enable instant, anytime/anywhere, delivery of blended learning programs using multiple modalities: video, live virtual classroom instruction, social learning, projects, and more. Contact Simplilearn to discover the most effective way to upskill and certify your team, or yourself.

Blended Learning: A Modality of Advancement