Hedging: A boon or a Curse 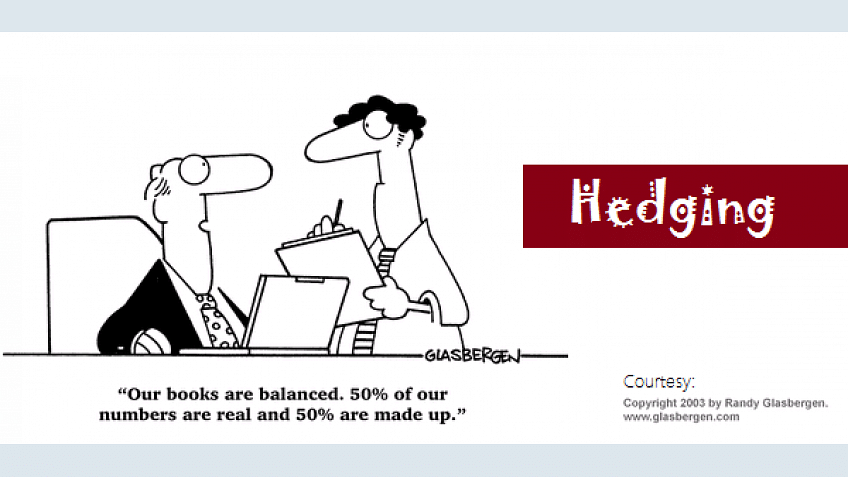 When a hedge is not a hedge

The word “hedge” is a misused word and where it is supposed to protect an asset against risk, hedges actually cause more damage to the asset. Hedge is defined by investopedia.com as “Making an investment to reduce the risk of adverse price movements in an asset”. The definition cannot be further from the truth. The most recent example of a hedge going wrong is the USD 2 billion (will go up to USD 3 billion soon) loss suffered by a top investment bank (headquartered in USA) by its risk managers.

It's trading desk that was responsible for investing excess cash held by the bank, put on huge hedge positions in synthetic credit derivatives, supposedly to protect the bank's credit portfolio. The credit derivative positions became so big that bank found that it could not unwind the positions and traders finding that the bank was vulnerable made opposite bets to the bank's position, leading to notional value of the hedge falling like nine pins. The lesson learnt by CFO’s, traders, fund managers, speculators and investors alike from this phenomenon is that hedge is not a hedge.

A hedge is a position to be managed as a standalone position rather than a hedge to an underlying position.

Currency hedges work when all the legs are tied up, export realizations, maturity of the contract and price. Any one leg left open is a recipe for disaster as seen by the huge losses suffered by Indian corporates in 2007-08 when they took on positions in exotic derivative contracts as hedges for their exports/imports. Traders try and put on hedges to take advantage of basis spreads.

Traders have lost huge amounts of money due to basis risk in such positions. Fund managers try and hedge portfolios with equity derivatives such as futures and options. Hedging equity portfolios with index futures and options or with single stock futures and options exposes the fund manager to all kinds of correlation risk. For example a mid cap or small cap or even diversified portfolio will have very low correlation to an index derivative and adverse movements in these hedges will cause investors huge losses. In fact regulators will have to make disclosing derivative exposures and losses on derivative contracts compulsory for equity funds that have a buy and hold objective.

The day trader or speculator who tries to match one position with the other to profit from relative movements will usually lose out when each position takes a different turn. Hence relative strategies are highly risky and are to be avoided when markets are volatile. For example going long on index futures and going short on say Reliance is a hugely risky strategy if the positions are not managed properly. Index futures can fall while Reliance can move up leading to losses on both sides of the trade.

The best hedge is cash, as it will not lose money, it will lose only the opportunity cost of not being invested.