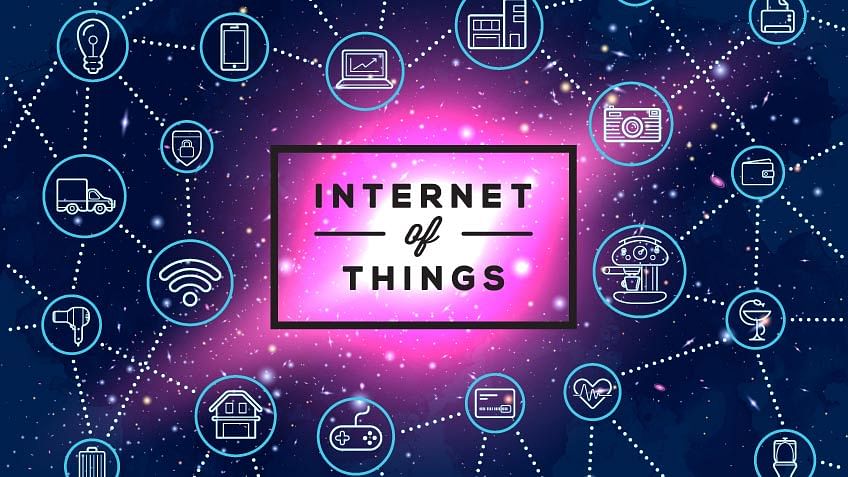 The term “Internet of Things” has become increasingly popular over the last five years or so, and it looks like we’ll be hearing even more about it in the coming years. But, as is the case with other hot buzz phrases like this, many people scratch their heads and ask, “What is this, and why should I care?”

That’s why we’re here. In this article, we will explore what the Internet of Things (or IoT for short) is, different IoT applications, how different industries are applying the concept, and what the future of IoT looks like.

What is the Internet of Things?

Let’s begin with the basics. Exactly what is the Internet of Things? There are plenty of definitions out there, and a lot of time, it depends on the perspective of the article’s author. The simplest, most straightforward definition is: The IoT is a network of Internet-linked devices, vehicles, and appliances that can collect and share data without need of human interaction. That’s it.

IoT devices gather information and send it along to some central data server, where the information is processed, collated, distilled, and used to make a host of tasks easier to perform. The business world enjoys the benefits of IoT, government, organizations, and the individual consumer.

Specific IoT-equipped devices include smartphones, laptops, coffee machines, refrigerators (mine auto-orders replacement water filters!), Google Home, Apple watches, Fitbits, to name a few. Any device can be plugged into the IoT provided it is equipped with sensors and an Internet connection.

What Are the Internet of Things Applications?

The Internet of Things can be used in many different aspects of life, in both the private and public sectors. Thanks to IoT, people can track things like lost pets, their house’s security systems, or appliance maintenance schedule.

Consumers can use the IoT to help them make restaurant reservations, monitor their exercise progress and overall health, and receive coupons for a store only by virtue of walking by the business in question.

Businesses can use IoT to monitor supply chains, track customers’ spending habits as well collect their feedback, monitor and maintain inventory levels, and engage in predictive maintenance of their machines and devices.

The IoT also proves helpful in ITIL, which is a set of IT service management, an important detail, since IT departments are called on to do more and more in a world that’s getting increasingly digital, with more reliance on wireless networks.

Blockchain, which is being increasingly used as a more efficient and secure method of transaction and data processing, is a natural beneficiary of IoT technology. We can expect to see IoT and Blockchain coming together more often in the future.

But how do different industries apply the Internet of Things to make things more efficient?

The ubiquity of the Internet of Things is a fact of life thanks to its adoption by a wide range of industries. IoT’s versatility makes it an attractive option for so many businesses, organizations, and government branches, that it doesn’t make sense to ignore it. Let us learn about IoT applications across industries below:

For indoor planting, IoT makes monitoring and management of micro-climate conditions a reality, which in turn increases production. For outside planting, devices using IoT technology can sense soil moisture and nutrients, in conjunction with weather data, better control smart irrigation and fertilizer systems. If the sprinkler systems dispense water only when needed, for example, this prevents wasting a precious resource.

2. IoT Applications in Consumer Use

Smart homes take care of things like activating environmental controls so that your house is at peak comfort when you come home. Dinner that requires either an oven or a crockpot can be started remotely, so the food is ready when you arrive. Security is made more accessible as well, with the consumer having the ability to control appliances and lights remotely, as well as activating a smart lock to allow the appropriate people to enter the house even if they don’t have a key.

First and foremost, wearable IoT devices let hospitals monitor their patients’ health at home, thereby reducing hospital stays while still providing up to the minute real-time information that could save lives. In hospitals, smart beds keep the staff informed as to the availability, thereby cutting wait time for free space. Putting IoT sensors on critical equipment means fewer breakdowns and increased reliability, which can mean the difference between life and death.

Elderly care becomes significantly more comfortable with IoT. In addition to the above-mentioned real-time home monitoring, sensors can also determine if a patient has fallen or is suffering a heart attack.

Even the insurance industry can benefit from the IoT revolution. Insurance companies can offer their policyholders discounts for IoT wearables such as Fitbit. By employing fitness tracking, the insurer can offer customized policies and encourage healthier habits, which in the long run, benefits everyone, insurer, and customer alike.

The world of manufacturing and industrial automation is another big winner in the IoT sweepstakes. RFID and GPS technology can help a manufacturer track a product from its start on the factory floor to its placement in the destination store, the whole supply chain from start to finish. These sensors can gather information on travel time, product condition, and environmental conditions that the product was subjected to.

Sensors attached to factory equipment can help identify bottlenecks in the production line, thereby reducing lost time and waste. Other sensors mounted on those same machines can also track the performance of the machine, predicting when the unit will require maintenance, thereby preventing costly breakdowns.

IoT technology has a lot to offer the world of retail. Online and in-store shopping sales figures can control warehouse automation and robotics, information gleaned from IoT sensors. Much of this relies on RFIDs, which are already in heavy use worldwide.

Mall locations are iffy things; business tends to fluctuate, and the advent of online shopping has driven down the demand for brick and mortar establishments. However, IoT can help analyze mall traffic so that stores located in malls can make the necessary adjustments that enhance the customer’s shopping experience while reducing overhead.

Speaking of customer engagement, IoT helps retailers target customers based on past purchases. Equipped with the information provided through IoT, a retailer could craft a personalized promotion for their loyal customers, thereby eliminating the need for costly mass-marketing promotions that don’t stand as much of a chance of success. Much of these promotions can be conducted through the customers’ smartphones, especially if they have an app for the appropriate store.

By this time, most people have heard about the progress being made with self-driving cars. But that’s just one bit of the vast potential in the field of transportation. The GPS, which, if you think of it, is another example of IoT, is being utilized to help transportation companies plot faster and more efficient routes for trucks hauling freight, thereby speeding up delivery times.

There’s already significant progress made in navigation, once again alluding to a phone or car’s GPS. But city planners can also use that data to help determine traffic patterns, parking space demand, and road construction and maintenance.

There’s even a possibility that apps can be made that can prevent a car from starting if the driver is inebriated!

IoT sensors can be employed to monitor environmental conditions such as humidity, temperature, and lighting. The information provided by IoT sensors can aid in the creation of algorithms that regulate energy usage and make the appropriate adjustments, eliminating the human equation (and let’s face it, who of us hasn’t forgotten to switch off lights in a room or turn down the thermostat?).

With IoT-driven environmental control, businesses and private residences can experience significant energy savings, which in the long run, benefits everyone, including the environment!

On a larger scale, data gathered by the Internet of Things can be used to help run municipal power grids more efficiently, analyzing factors such as usage. Also, the sensors can help pinpoint outages faster, thereby increasing the response time of repair crews and decreasing blackout times.

Watch the video below to understand IoT and how it works.

The Future of the Internet of Things

So, considering the above, just what does the future have in store for the Internet of Things?

A Gartner report predicts that connected devices across all manner of technologies will hit 20.6 billion. That number could hit 1 trillion by 2025, according to HP, and that’s just a staggering figure. According to a Cisco report, the next decade will see IoT devices creating $14.4 trillion worth of value across several industries like the ones mentioned above.

In other words, the Internet of Things is poised to create life-changing conditions in our lives, both in a professional and personal capacity. Many of the innovations mentioned are already in place to one extent or another. One thing’s for sure: there’s no going back. The IoT offers an unprecedented degree of control and efficiency that no industry can ignore.

What does that mean for you? The Internet of Things, and its association with technologies such as ITIL, Blockchain, and Big Data, is a lucrative field with lots of potential for careers. Check into Simplilearn’s offerings in the technologies as mentioned above to get your start in becoming proficient in the workings of the Internet of Things, and be prepared for the future.