HomeResourcesSoftware DevelopmentWhat Are IoT Devices : Definition, Types, and 5 Most Popular Ones for 2023

What Are IoT Devices : Definition, Types, and 5 Most Popular Ones for 2023 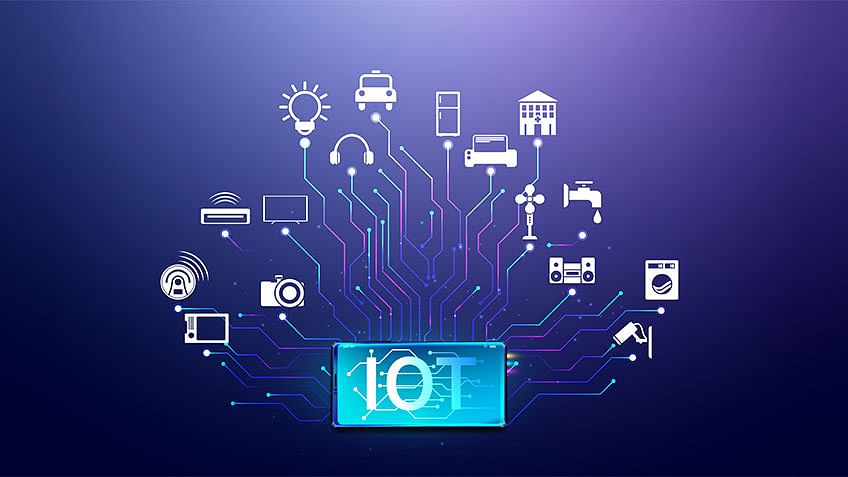 The term “Internet of Things” or IoT was first coined by Kevin Ashton in 1999. But it was only when Gartner added IoT to its list of new emerging technologies in 2011, that it started to gain global momentum. As of 2021, there were 21.7 billion active connected devices in the world today, out of which more than 11.7 billion (54 percent) are IoT devices. This means that there are more IoT devices in the world than there are non-IoT devices.

IoT is an umbrella term that refers to the billions of physical objects or “things” connected to the Internet, all collecting and exchanging data with other devices and systems over the Internet.

While IoT has been in existence since the 90s, recent advances in a number of different technologies have made it more practical, such as:

IoT devices can range from small ordinary household cooking appliances to sophisticated industrial tools. Each IoT component has a Unique Identifier (UID) and they can also transmit data without the assistance of humans.

Why is IoT Important?

IoT has made it possible for the physical world to meet the digital world and cooperate with each other. It offers numerous benefits to organizations by enabling them to automate and simplify their daily tasks.

As IoT grows exponentially year on year, companies are leveraging the tremendous business values it can offer. Here are some of the most important benefits of IoT:

Although the worldwide spending on IoT has been significantly impacted by the economic effects of the COVID-19 pandemic, a study by IDC shows that it will achieve a CAGR of 11.3 percent over the 2020-2024 forecast period.

What Are IoT Devices?

IoT devices are hardware devices, such as sensors, gadgets, appliances and other machines that collect and exchange data over the Internet. They are programmed for certain applications and can be embedded into other IoT devices. For example, an IoT device in your car can identify the traffic ahead and send out a message automatically to the person you are about to meet of your impending delay.

How do IoT Devices Work?

Different IoT devices have different functions, but they all have similarities in terms of how they work. Firstly, IoT devices are physical objects that sense things going on in the physical world. They contain an integrated CPU, network adapter and firmware, and are usually connected to a Dynamic Host Configuration Protocol server. It also requires an IP address to function over the network.

Most IoT devices are configured and managed through a software application. For example, an app on your smartphone to control the lights in your home. Some devices also have integrated web servers, which eliminates the need for external applications. For example, the lights switch on immediately when you enter a room.

The key driver behind smart and secure homes is IoT. A variety of sensors, lights, alarms and cameras (all of which can be controlled from a smartphone) are connected via IoT to provide 24x7 security.

Smart home security cameras provide alerts and peace of mind. Activity trackers are sensor devices that can monitor and transmit key health indicators in real-time. You can track and manage your blood pressure, appetite, physical movement and oxygen levels.

IoT-enabled detection systems, sensors and cameras can be placed in restricted areas to detect trespassers. They can also identify pressure buildups and small leaks of hazardous chemicals and fix them before they become serious problems.

Augmented Reality (AR) glasses are wearable computer-enabled glasses that help you get extra information such as 3D animations and videos to the user's real-world scenes. The information is presented within the lenses of the glasses and can help users access Internet applications.

Motion sensors can detect vibrations in buildings, bridges, dams and other large-scale structures. These devices can identify anomalies and disturbances in the structures that could lead to catastrophic failures. They can also be used in areas susceptible to floods, landslides, and earthquakes.

Google Home voice controller is one of the most popular IoT devices out there today. It provides voice-enabled services like alarms, lights, thermostats, volume control and lots more.

Amazon Echo Plus voice controller is another popular and reliable IoT device on the market. It provides voice-enabled services like answering phone calls, setting timers and alarms, checking the weather, and lots more.

August Doorbell Cam is an IoT device that allows you to answer your door from any remote location. It constantly captures motion changes and suspicious activity in your doorstep.

August Smart Lock is a proven and reliable security IoT device that helps users to manage their doors from any remote location. It helps keep thieves away and provides an extra layer of security for your home.

Foobot is an IoT device that can accurately measure indoor pollution. It helps to improve the air quality in houses, cafes, workplaces, and other indoor public spaces.

Have a look at the video below that will help you understand IoT and how it works.

IoT is really just getting started and the estimations for the future growth of IoT devices are at the high end of the scale. In the next few years, we will be connected in ways that are deemed impossible today. The integration of AI and IoT will enable creative thinking and innovative applications across multiple industries.

The key to building an effective career in IoT is to make sure that you start on the right foot and understand how IoT is intertwined with other technologies. Simplilearn’s Introduction to IoT Training Course will help you get a glimpse into the ever-growing field of IoT and its network of internet-connected objects. The course will familiarize you with popular IoT concepts, its origin, impact, methodologies, tools, and how IoT is integrated into business applications to improve business results. Get started with this course today and learn more about the unlimited possibilities of IoT to advance your career in this field.

Using IoT Applications to Manage the Spread of Covid-19