HomeResourcesSoftware DevelopmentNode.js vs. Java: Differences, Applications, and Why You Should Learn Them

Node.js vs. Java: Differences, Applications, and Why You Should Learn Them 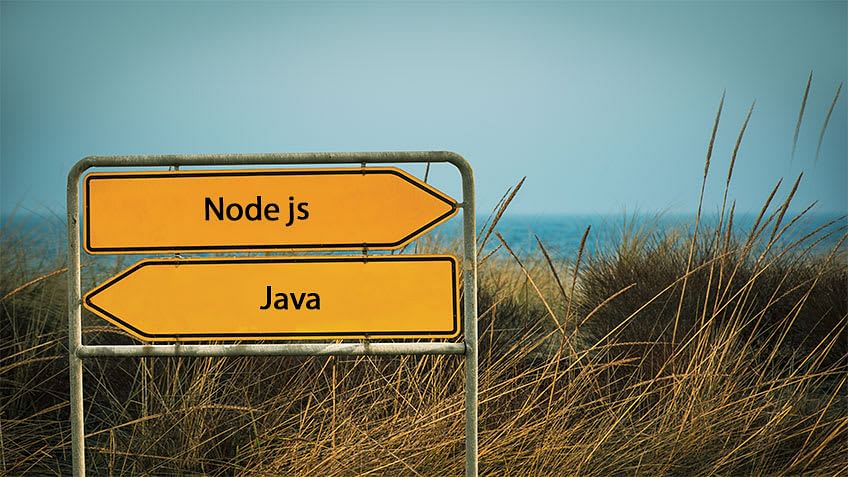 There is currently a battle raging for control of developers and programmers' hearts and minds in today's IT world. There’s Java, the venerable champion long used by programmers worldwide, and there’s Node.js, the relatively young upstart JavaScript runtime environment.

This article explores these two powerful tools, highlighting the difference between Node.js vs. Java. We may not ever settle the question of which is ultimately better, but we can better understand both tools and where to use them.

Let’s begin with the newcomer.

Ryan Dahl developed Node.js in 2009. It is an open-source, cross-platform JavaScript (JS) runtime environment that allows programmers to write JavaScript on the client and server sides. It runs JavaScript applications outside of a browser. Node.js is not a programming language, but rather an environment that works with JavaScript. Node.js also lets developers execute their code on the server-side and provides a faster way to write light, scalable scripts.

Node.js brings valuable benefits to the table, including:

There aren’t many disadvantages to Node.js, but programmers and users should watch out for these pitfalls when considering Node.js vs. Java:

Many noteworthy companies and organizations use Node.js for their applications. Here are some examples of Node.js applications, showing why it’s such a versatile environment.

Node.js’s event loops allow apps to receive new data without constantly refreshing, making it a natural for social networking apps. LinkedIn certainly thinks so, which is why it traded Ruby on Rails for Node.js.

Node.js is perfect for collecting, analyzing, and visualizing data in real-time. Heap and YCharts rely on that data handling capability to make their apps faster and more responsive to users.

Netflix improved its app’s performance by switching to Node.js and taking advantage of its Stream API. The interface allows new components to be easily downloaded on demand. It transmits parts of the app’s code to local machines without closing the connection, caching, or temporary data.

Groupon switched to Node.js because it needed faster speeds and the means of handling heavy traffic. PayPal was having execution issues and became one of the first major companies to give Node.js a try. In both instances, Node.js resolved the problems, resulting in faster page-loading times, handling more massive traffic volumes, and enhancing the sites’ overall performance.

eBay switched to Node.js due to its ability to maintain live connections with their servers while simultaneously handling multiple requests. Wal-Mart enjoyed similar results when it used Node.js to redesign its mobile app to provide more client-side features.

Java, developed by James Gosling and the “Green Team” at Sun Microsystems in 1991, is an object-oriented, class-based, general-purpose programming language. Stability, efficiency, and cross-platform capabilities count among Java’s chief characteristics. Java is one of the most popular and heavily used programming languages around the world.

Programmers use Java to build quality efficient applications for computers and mobile phones alike. You will find Java associated particularly with Android phones, enterprise computing, and several embedded worlds such as Blu-ray disks.

Java’s source program is converted to bytecode by the Java compiler. This bytecode can then run on any operating system with a compatible JRE (Java Runtime Environment) installed on it. That means that any source code written in Java can be run on any platform, providing one of Java’s most significant benefits.

Speaking of benefits, here’s a list of Java’s good points:

Although Java enjoys a big list of benefits and has the advantage of longevity, it’s not all sunshine and daffodils for the venerable language. When considering Node.js vs. Java, you should know the disadvantages of Java.

Java’s age and ubiquity make it easy to find everywhere, across all industries and institutions. Here are some examples of popular Java applications:

The vast majority of Android apps are written in Java, often with Google’s API. For example, Spotify’s app uses Java.

Uber and AirBnB use Java-based apps.

Murex, a company that provides tech solutions in the finance sector, relies on Java for their trading applications.

Big data technologies such as Hadoop use Java in many different capacities, including ElasticSearch, Apache’s HBase, and the open-source Accumulo.

You can also find Java in the Internet of Things, scientific applications, and Gmail.

Node.js vs. Java: What’s the Difference?

Let’s sharpen our focus on the question of Node.js vs. Java performance by illustrating their differences with a table, presenting them in a head-to-head format.

To sum up the differences between Node.js vs, Java: Java is a programming language used to develop applications for various environments, including Android apps, video games, desktop apps, consumer devices, and enterprise systems. It also functions well as a server-side language used for backend development. In contrast, Node.js is a cross-platform runtime environment best suited for JavaScript developers, especially for creating event-driven I/O bound applications.

The best way to get a better appreciation of the capabilities of Node.js vs. Java is to increase your knowledge base using courses related to web and app development. Also, if you’re already a programmer, these courses work well as upskilling resources.

The Python Certification Course gives you the skills and hands-on development experience in Python, another often-used programming language. You can learn about front-end development with the Angular Certification Course, or learn about developing user interfaces with the React.js training course that uses JavaScript libraries to help design UI and UX solutions for web and mobile apps.

If you want to pursue MEAN full-stack web development, take the Full Stack Web Developer MEAN Stack course and learn how to use Angular, MongoDB, Express.js, and Node.js.

Want to Learn More About Node.js vs. Java?

Simplilearn offers you the chance to learn more about Node.js vs, Java, courtesy of two highly informative and comprehensive courses.

The Node.js Certification Training Course teaches you how to build network applications quickly and efficiently with JavaScript. The Node.js certification training course is designed to help developers understand and build web applications using JavaScript. The Java Certification Training Course guides you through Java's concepts, starting with introductory techniques and taking you to advanced programming skills. The course teaches you about Core Java 8, operators, arrays, loops, methods, and constructors, and gives you hands-on experience in the JDBC and JUnit frameworks.

So whether you’re an experienced programmer who wants to upskill or someone who wants to get their start in programming, check out Simplilearn, and put those plans in motion today!