HomeResourcesSoftware DevelopmentJavaScript Tutorial: Learn JavaScript from ScratchJava Vs .NET: Which Is The Best Technology To Choose?

Java Vs .NET: Which Is The Best Technology To Choose? 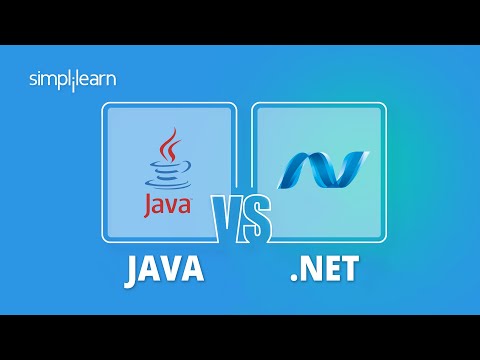 Java and .NET are both widely used technologies in software industries currently. The scope and applicability of Java vs .NET are self-explanatory. Java is a well-known programming language, and .NET is a well-known framework owned by Microsoft.

Developers use Java and.NET to create a wide range of internet apps, mobile, desktop, gaming, and IoT apps, making them incredibly popular. If you're confused between these two technologies, you've come to the right place. This tutorial will help you understand the differences between Java and .NET.

Learners, programmers, and developers are frequently perplexed about which programming language to learn or employ in their profession. To answer these questions, you will look at the key features of both Java and. NET. Let's get started with the primary differences between Java and .NET and see if you can overcome some of the obstacles.

Now that you have understood what java and .net are, look at the comparison between Java vs .NET depending on the following parameters.

Some of the.NET libraries are as follows:

Some of the libraries used in Java are as follows:

.NET makes use of natively compiled languages such as C# and C++. They are faster and use less memory than Java. .NET also allows for code optimization and writing less code, which improves performance. Shorter code also means less time spent on code maintenance and simpler debugging.

The performance of Java is due in part to its Just-In-Time (JIT) compiler and concurrency features. The Java runtime environment includes the JIT compiler.

The Java Virtual Machine immediately executes the compiled code (JVM). Because the code is not interpreted, compiling does not take any processing time or memory. As a result, a Java application runs at the same speed as a native application.

.NET- There are 254,189 net developers working in the United States.

Java- There are 316,715 Java developers working in the United States.

Now that you understand Java vs .NET, here is a complete table for your reference.

Now that you have seen Java vs .NET, see where to use .NET and Java.

Where to Use .NET and Java?

Hope that this tutorial on .NET vs Java has helped you understand the differences between Java and .NET, now you can accurately decide which one is best for your needs.

If you need more information, please visit our YouTube channel for a detailed explanation of Java and .NET. If you are thinking actively about pursuing a career in Java, Simplilearn’s Full Stack Java Development Master’s Program is the one you should explore. A comprehensive bootcamp offering work-ready training in today’s most sought-after front-end, middle-ware, and back-end technologies, this course is a globally-recognized certification that will be your ideal catalyst for your career in Full Stack Development.

Shaik Mohammad Khizar H.A is a Research Analyst at Simplilearn and a graduate of engineering. He is a member of the content marketing team. Khizar specializes in a wide range of technologies, including RPA, AI, other frameworks and programming languages.