Regression vs. Classification in Machine Learning for Beginners 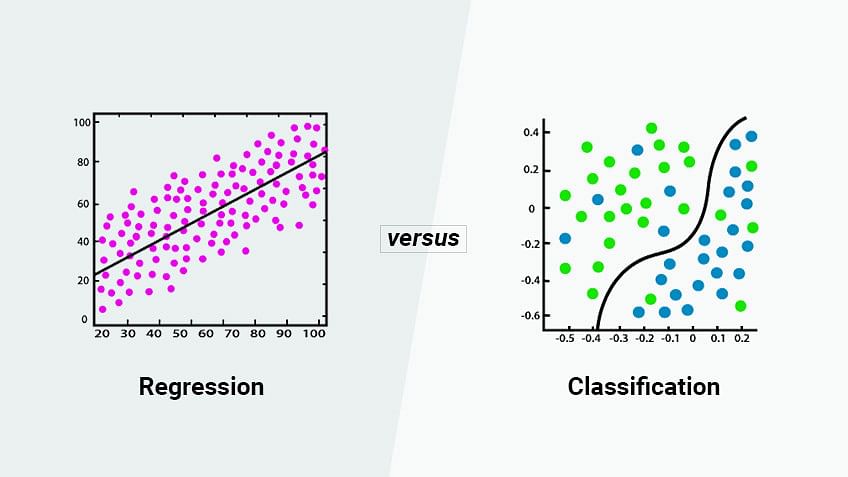 Our machines are getting more intelligent and more capable of independent tasks, and they owe it to the rapidly growing fields of Artificial Intelligence and Machine Learning. However, both areas are incredibly complex and take time and effort to understand better.

This article explores Regression vs. Classification in Machine Learning, including the definitions, types, differences, and use cases.

The foremost leader in IT, IBM defines Machine Learning as “…a branch of artificial intelligence (AI) and computer science which focuses on the use of data and algorithms to imitate how humans learn, gradually improving its accuracy.”

Both Regression and Classification algorithms are known as Supervised Learning algorithms and are used to predict in Machine learning and work with labeled datasets. However, their differing approach to Machine Learning problems is their point of divergence.

Now let’s take an in-depth look into Regression vs Classification.

On the other hand, Classification is an algorithm that finds functions that help divide the dataset into classes based on various parameters. When using a Classification algorithm, a computer program gets taught on the training dataset and categorizes the data into various categories depending on what it learned.

Classification algorithms find the mapping function to map the “x” input to “y” discrete output. The algorithms estimate discrete values (in other words, binary values such as 0 and 1, yes and no, true or false, based on a particular set of independent variables. To put it another, more straightforward way, classification algorithms predict an event occurrence probability by fitting data to a logit function.

Classification algorithms are used for things like email and spam classification, predicting the willingness of bank customers to pay their loans, and identifying cancer tumor cells.

Here are the types of Regression algorithms commonly found in the Machine Learning field:

And here are the types of Classification algorithms typically used in Machine Learning:

The Difference Between Regression vs. Classification

This image, courtesy of Javatpoint, illustrates Classification versus Regression algorithms.

This table shows the specific differences between Regression vs. Classification algorithms.

Now that we have the differences between Classification and Regression algorithms plainly mapped out, it’s time to see how they relate to decision trees. But before we do that, we need to ask an important question.

Decision tree algorithms are if-else statements used to predict a result based on the available data.

Here’s an example of a decision tree, courtesy of Hackerearth. We can use this decision tree to predict today's weather and see if it's a good idea to have a picnic.

Now that we have the definition of a basic decision tree squared away, we’re ready to delve into Classification and Regression Trees.

What’s the Difference Between a Classification and Regression Tree?

A Classification tree is an algorithm with either a fixed or categorical target variable. We can then use the algorithm to identify the most likely “class” a target variable will probably fall into. These algorithms are used to answer questions or solve problems such as “Who is most likely to sign up for this promotion?” or “Who will or will not pass this course?”

Both of those questions are simple binary classifications. The categorial dependent variable assumes only one of two possible, mutually exclusive values. However, you may have cases where you need a prediction that considers multiple variables, such as “Which of these four promotions will people probably sign up for?” In this case, the categorical dependent variable has multiple values.

Here’s a sample Classification tree that a mortgage lender would employ, courtesy of Datasciencecentral.

A Regression tree describes an algorithm that takes ordered values with continuous values and predicts the value. For example, you may want to predict a condominium’s selling price, a continuous dependent variable.

The selling price would depend on continuous factors like square footage and categorical factors like the condo's style, the property's location, and similar factors.

Here’s an example of a Regression tree, courtesy of Rpub. This tree calculates baseball player salaries.

As for the actual differences, Classification trees are used for handling problems dealing with classification results, and Regression trees work with prediction type problems. But let’s look closer at the differences.

Classification trees divide the dataset based on homogeneity, such as a pair of variables. For instance, we could use two variables such as age and gender. If the training data showed that 85 percent of men liked a specific movie, the data is split at that point, and gender becomes a top node in the tree. That division makes the information 85% pure.

The Regression trees fit to the target variable using all the independent variables. The data of each independent variable is then divided at several points. The error between predicted and actual values gets squared at each point to arrive at a Sum of Squared Errors, or SSE. This SSE gets compared across all variables, and the point or variable with the lowest SSE becomes the split point, and the process continues recursively.

Drawbacks of Classification and Regression Trees

No system is perfect. Classification and Regression decision trees bring their own challenges and limitations.

When to Use Regression vs. Classification

We use Classification trees when the dataset must be divided into classes that belong to the response variable. In most cases, those classes are “Yes” or “No.” Thus, there are just two classes, and they are mutually exclusive. Of course, there sometimes may be more than two classes, but we just use a variant of the classification tree algorithm in those cases.

Is a Decision Tree a Regression or a Classification Model?

Do You Want to Become a Machine Learning Professional?

If you’re looking for a career that combines a challenge, job security, and excellent compensation, look no further than the exciting and rapidly growing field of Machine Learning. We see more robots, self-driving cars, and intelligent application bots performing increasingly complex tasks every day.

Simplilearn can help you get into this fantastic field thanks to its AI and Machine Learning Course. This program features 58 hours of applied learning, interactive labs, four hands-on projects, and mentoring. You will receive an in-depth look at Machine Learning topics such as working with real-time data, developing supervised and unsupervised learning algorithms, Regression, Classification, and time series modeling. In addition, you will learn how to use Python to draw predictions from data.

According to Glassdoor, Machine Learning Engineers in the United States can earn a yearly average of $123,764, while in India, a similar position offers an annual average of ₹1,000,000!

Let Simplilearn help you take your place in this amazing new world of Machine Learning and give you the tools to create a better future for your career. So, visit Simplilearn today and take those vital first steps!